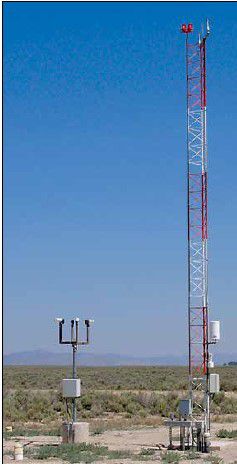 Anyone with more than a student certificate has heard these reports countless times. And yet the AWOS and ASOS system remains a bit of a mystery to many of us. Just tune the proper frequency and don’t worry about how the data is collected or how frequently it is updated. Who owns these stations anyway? And what is the difference between an AWOS and an ASOS station? Let’s take a close look at the mysterious world of automated weather reporting.

The primary difference between AWOS and ASOS is who owns the station. Generally speaking, if the station is termed an ASOS then the federal government owns it. If anyone else owns the station, then it is termed an AWOS, although the FAA does own a few AWOS stations. Typically an AWOS can be owned by a state, a county, a city or anyone else, even the FBO at the airport. But most AWOS stations are owned by one or another local government agency. Whether it’s an ASOS or an AWOS the sensors for both are mostly the same.

If you want to be magnanimous, you could even sponsor an AWOS for your home ’drome. But that could get a bit tricky. There are only a few manufacturers of FAA-approved AWOS stations. And you’d have to get one of those if you want to have it broadcast the data. It’s aviation, so a reasonably equipped station is not cheap. They go for between $50K and $200K depending on the sensors with which the station is equipped.

The maintenance costs are nontrivial as well. Estimates range from a few thousand dollars a year to as much as $20,000 per year just to keep the station up and running properly. So unless you’ve recently sold your high-tech startup, it might be smarter to convince your local government to put up the AWOS station rather than trying to pay for it yourself. If you do feel so inclined
and want to install an AWOS station, the FAA has created a document for you to help you avoid the common problems with installation. Just take a look at AC 150/5220-16E. There’s more there than you ever knew existed.

What Do You Want to Know?

Once your weather station has been set up and is running what can it do? That depends on which sensors have been purchased. The AIM table on the next page shows which sensors are available with different versions of AWOS/ASOS: As you can see there are quite a few sensors available. Note that if a particular sensor is not working, then its value is reported as “missing.” But if the sensor does not exist at all, then the information is simply not reported, omitting the word “missing.”

Most of the sensors are pretty accurate. For example temperature, dewpoint, and wind data are as accurate as a human observer would be. But other measurements might not be quite as good. It’s important to know how some of the observations are taken so that you know if they are accurate or not.

Cloud and ceiling measurements are one piece of data
that old salts know should be taken with a grain of salt. (After all, that’s how they got to be old salts.) Automated stations use a laser beam ceilometer. However the laser only points straight up from the station. It doesn’t point in different directions. Since the laser might detect a small hole in an otherwise overcast sky, many readings are taken over the course of about half an hour. This should give a reasonable estimate of cloud cover. But if the clouds are changing rapidly or are forming on one side or the other of the airport, the report of the clouds could be off significantly.

Reports of visibility are also somewhat suspect. The sensors that make these measurements do so over a very short range—typically only a few feet. They extrapolate these measurements to report a much greater range. If there is a lawn mower kicking up dust near the sensor then the reported visibility will be much lower than the actual value until sometime after the lawn mower moves on.

I once listened to an AWOS that was reporting half a mile visibility. As I approached the airport I could see that there wasn’t a cloud in the sky and visibility was unlimited. I spoke to the airport manager when I was on the ground. The two of us went out to the AWOS station and discovered that a honey bee colony had set up camp right under the sensor and the bees flying in and out through the sensor caused the erroneous readings.

A human-observed ATIS report is issued once an hour, typically a few minutes before the top of the hour. But how often are AWOS/ASOS reports updated? That depends on how you obtain the data. If you are listening on the radio then the data is essentially real time, updated approximately once a minute. That’s why ATC refers to AWOS/ASOS reports as “One-minute weather.” But if the report you get is other than a live radio report (e.g. you read it online or FIS-B transmits the data to your cockpit) then the data is updated typically every twenty minutes. If there is a major change in the weather, then just like ATIS, the data may be updated more frequently than every 20 minutes.

There is also a device called “SuperAWOS” that reports weather on the Unicom frequency. SuperAWOS’s have several other useful functions such as echoing a transmission so that a pilot can tell if his/her radio is working at a quiet airport. However there were several problems with many of these stations and in 2008 the FAA removed many of them from the AF/D. Several instrument approach procedures that were predicated on the SuperAWOS’s were decommissioned. Today most of these stations that remain in service are now termed SuperUnicoms and no longer provide weather service.

Additionally, not all AWOS/ASOS stations are located on an airport. The state of Colorado has located several AWOS stations throughout the mountains to help pilots determine the weather in or near mountain passes. If you have ever skied Copper Mountain Ski Resort in the Rockies then you probably have seen an AWOS station at the peak of the resort. Pilots flying into the Denver area from the west also listen to the reports from the Dakota Hills and Berthoud Pass stations to determine whether it is safe to cross the continental divide at these locations. With peaks approaching, and sometimes exceeding 14,000 feet, this is important information to have.

Finally what does it mean if you see a written METAR report from an AWOS/ASOS station and the report ends with a dollar sign? Most of the online translators won’t decode this part of the METAR. The dollar sign means that the station requires (expensive?) maintenance.

Next time you listen to an AWOS or ASOS thinks of all the effort that went into the device and what it takes to keep it running. Be aware of the pitfalls of some of the readings that are reported. And as always, fly with caution.