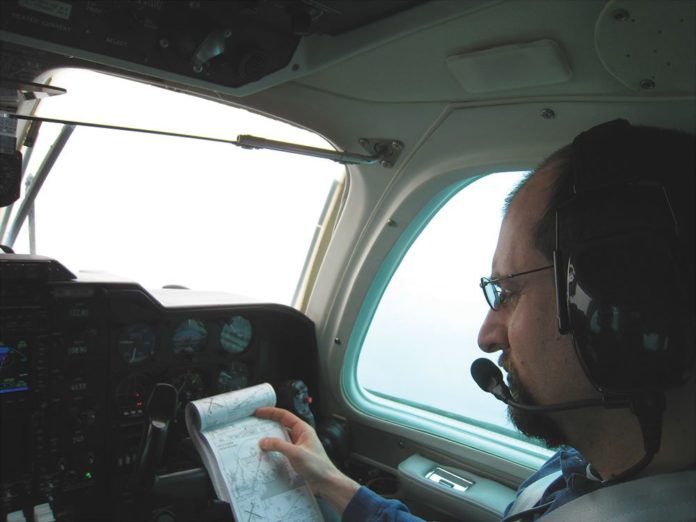 You want me to what? Where? En route holds are a rarity but fly enough, especially in high-traffic areas, and you’ll get one eventually. You should be prepared.

Keeping your holding skills up-to-date these days feels like keeping a working fax machine around; well, I suppose this might come in handy. Someday. Maybe.

Holds are rare, and the most common ones for the fat middle of GA are holds published on instrument approach charts where you have to make a few turns waiting for the Cessna ahead of you to trundle in against the headwind and cancel IFR. These are pretty easy, as you’re set up for them already.

Sometimes it’s as simple as pausing the GPS flight plan.
But there are still situations where you’ll be blithely minding your own IFR business and hear ATC say, “… I have holding instructions for you. Advise ready to copy.” You’ll be en route with no pretty picture or pre-set GPS racetrack to follow.

Because this isn’t a checkride or a common occurrence, your holding technique should lean on a few tricks to keep it as simple as possible. Simple is easier to remember when you get it thrown at you by surprise in IMC.

Size Up the Situation
Step one with an unexpected and unpublished hold is to get down the instructions and clarify in your mind what you’re supposed to do.

As a quick review, complete holding instructions will include the direction of the hold from the fix; the name of the fix; the radial, course or airway on which you’ll hold inbound, leg length if it’s in miles; and direction of turns if they’re to the left. Note that the last two items are optional. So, “Hold northwest of the Millinocket VOR on V314,” is a perfectly acceptable instruction. You’d make right turns of one-minute legs in such a hold, because nothing different was specified. The airway V314 northwest off Millinocket is R-318, so you’d hold on that radial with an inbound course to the VOR of 158.

Controllers aren’t always required to include an “expect further clearance” (EFC) time with holding instructions. Sometimes a controller issues a hold they don’t expect you to ever execute simply because rules don’t allow them to keep your current clearance, but they can’t give you the new one yet. If they do expect a delay at the holding fix, there should be some EFC just in case you go lost comm and need to know when to resume your IFR plan already in progress. Lost comm and a random hold in the same flight? Somebody is out to get you on a day like that.

A plus with the unpublished hold is you’re usually going to hold directly along your current route. Trace your finger along your route on a chart a few fixes forward and you’ll usually see your plan will be simply crossing the fix and turning right.

If you were GPS direct to your destination, you’ll usually get direct to a new, intermediate fix for holding. Your hold may not be a simple, direct entry because you’ll be holding on some radial convenient to ATC rather than whatever happened to line up for you. Tip one: Make a direct entry anyway.

This isn’t a checkride. ATC has traffic separated vertically and a big swath of space around you protected. If you’re a master of the hold entry, fine, but all that matters is staying in the right general space. Cross the fix. Turn however you need to fly outbound through the space you’re supposed to hold in, and intercept the holding course inbound so you’re the right way around. Pretty? Not likely. Simple, effective, legal and safe? Absolutely.

Also remember that controllers outside busy terminal areas don’t issue these instructions all that often themselves. If you look at situation after you get your holding instructions and it doesn’t make sense, query and negotiate.
For example, the “Hold northwest of Millinocket VOR on V314” is a direct entry when heading southeast-bound on V314. It would be a parallel entry to reverse course if you were heading northwest. The controller might not care which quadrant you hold on, so you could always ask to hold southeast of the VOR on the airway instead. It’s even possible that’s what the controller actually meant but issued it incorrectly.

Then again, if you’re just killing time, the parallel entry gives you something to do.

Old-School Holds
If you’re maintaining your aviation Luddite status and stubbornly refuse to pay $10,000 so you can file /G, holding is a simple affair of old-school VOR work and starting a timer.

In case you’ve forgotten because it’s been so long, a handy trick here is tuning one CDI to the inbound radial and a second one 90 degrees off. This both gives you a much cleaner mark of station passage (the CDI needle swings through rather than waiting for the full reversal of the to-from flag) and it can be used to mark when you’re abeam the holding fix outbound (the second CDI recenters) to start your timer if you want to practice your holding precision while you wait for parole.

The same trick often works at an intersection hold as well, because the angle is usually sharp enough that it’s close to centered on the outbound leg abeam the station. The same is usually true for DME holds along an airway; the DME mark for the fix works for the abeam position too. Again, this isn’t a checkride, and close enough is good enough unless you feel motivated for more.

Unpublished Holds GPS-Style
How you handle holds with GPS depends on your equipment. If you own one of the forward-thinking Apollo CNX-80 boxes that became the Garmin GNS-480, you can enter a custom hold anywhere you want. You will also get the feature free with your $750,000 Cessna Corvalis TTx and its G2000 system, and with turbine-level FMS systems.

More mundane GPS systems may require a bit more creativity if you want to use the GPS rather than fall back on VOR skills.

If the holding fix is already in your flightplan, it’s usually a matter of suspending the sequencing of waypoints before you cross the fix and flying the hold manually. “Manually” includes using the heading bug and the autopilot. Without a little magenta racetrack to follow like a lab rat, your autopilot can’t fly the hold itself.

A bit trickier is the DME-distance hold with GPS, such as: “Hold southeast at 10 DME from the Millinoket VOR, four-mile legs.” While you could watch the GPS distance to Millinoket count down to 10 each circuit, a better choice is to make a quick user waypoint. The still-standard GNS 430 and friends do this from the last page of the waypoint group. Name the waypoint anything you can remember and define it as a radial and distance from the VOR. Tip for 430 users: Be sure to hit Enter for every prompt before leaving the page. Miss one Enter-key push and you’ll have to do it all over again. Tip for Avidyne Entegra Cirrus pilots: Do this with every hold and you’ll see the fix on your MFD.

Next you insert that waypoint in your flight plan and suspend it before you get there. After that, it’s just like a hold over a waypoint that was already in the database.

Don’t Hold Me Back
You could say “Unable” to a controller’s en route hold. But the controller is likely to suggest you say “Cancel IFR” next. You’ll need a better reason than you can’t remember how to program it in the GPS. If you are really tied up with something, you can ask for a couple delay vectors to get situated and you may never have to hold at all.

Speaking of reasons, if it’s a hold that’s going to last a while, such as your EFC time is 40 minutes from now and the reason is a disabled aircraft on your landing runway, you might want to start making other plans long before the hold. If the controller doesn’t volunteer a reason, find out what’s up. Even a short hold is a good time to give a revised look at your fuel status, check destination weather or tidy up any put-off cockpit tasks.

It’s an uncommon event, but the unpublished hold is worth practicing now and again. That way when you get hit with one you won’t blanch. Instead, you’ll say to yourself, “An unpublished hold? Really? Cool. Lemme see if I can remember how to do this …”

Jeff Van West loves the unexpected, especially when his inner obsessive worrier already had a contingency plan standing by.