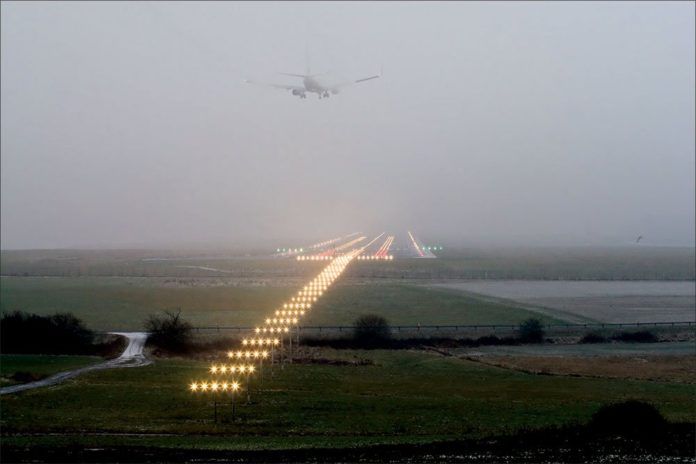 As much as we drill instrument students on the 10 items from FAR 91.175 (c) you could see to go below DA/MDA, in the real world if we see anything that might be part of the runway, we land on it. It’s nearly certain that you’ll first see the ALS, allowing you to descend to 100 feet AGL and search for something resembling a runway.

But the ALS deserves more respect than just a bunch of lights short of the threshold. It bridges the gap between instrument flight and visual flight. We talked about this in general (“Making IMC Transitions,” October 2012 IFR), but an ALS performs three essential functions: orientation, measurement and guidance. Know your lights and the ALS will better fill that need.

Lights for Landing
Anyone who has popped out of low clouds knows the runway isn’t always centered in the windscreen or even at your roll or pitch angle. ALSs all have some combination of lights, sometimes flashing, to get your attention and offer some direction. Even without knowing exactly what lights to expect, you can get some orientation and guidance—follow these lights to the pavement.

Measurement might take a bit more study. FAR 91.175 says in two places that it doesn’t matter what you can see. If you don’t also have the required flight visibility, you can’t go below DA/MDA. By knowing which ALS to expect, you get a visual yardstick of that flight visibility. (Note that in Canada and some other countries, the ceiling is controlling, not the visibility as in the U.S.)

Also missing in this discussion is the CFI favorite about not descending lower than 100 feet above touchdown-zone elevation by the approach lights alone unless you also see the red side-row lights or terminating bars. Tell the voice of that CFI in your head to stuff it on this one. The extra descent to 100 feet can be helpful, but unless you’re CAT-II or better qualified, the red light part is pointless.The system with all the bells and whistles most common in the U.S. is the ALSF-2. Initially leading you from oblivion to the runway is a column of flashing lights extending from the runway center line. Each flashing light is in the middle of a narrow row of five white lights parallel to the threshold. There are typically 14 of these rows with the flashing light in the center. These rows of five white lights continue to the threshold, but the flashing lights are removed in the last 1000 feet.

The flashes fire in sequence so it appears as a ball of light zipping down the ALS centerline, towards the runway, twice a second. These are the sequenced flashing lights (SFL), sometimes called the rabbit. Their purpose is to help you acquire the ALS as a whole and orient to the runway as it comes out of the gloom. But if they distract you, put on your best Elmer Fudd voice and ask Tower to “Kill da wabbit.”

There’s a lot more lighting in that last 1000 feet than just the rows of five white lights. The SFLs stop at a white bar 1000 feet from the threshold that’s 100 feet wide—visually about three times as wide as the other rows so far. This is often called the “decision” or “roll” bar and both identifies where the last 1000 feet of the ALS starts, and provides some roll information for the pilot to visually keep the wings level in the transition to visual. At 500 feet before the threshold, there’s a mini roll bar of just three extra lights on either side of white center row. This barrette is mainly for Cat-II or lower approaches.

Two columns of red, three-bulb barrettes connect the far ends of the roll bar with the green threshold lights of the runway. These essentially make a runway-shaped box in the 1000 feet before the runway. Only the glideslope or VASI/PAPI give you descent angle guidance, but the shape of this box also helps. These are the red “side-lights” mentioned in the FARs, and they’re red to remind you this isn’t runway you’re looking at. It’s lighting before the green threshold bar. Some runways have these side-lights continue past the threshold, recessed into the runway itself, but those in-runway ones are white.

Overall, this bright road 2400 feet up to the threshold gives the pilot a visual indication of crab angle and helps prepare for the landing. The choice of 24 rows of lights 100 feet apart is no coincidence since most Cat-I ILS approaches require 2400 RVR or mile visibility. Approaches with slopes of less than 2.75 degrees get an extra six bars to reach 3000 feet.

Put these pieces together and it’s clear that they orient and guide, but using them for measurement is interesting. On a standard three-degree ILS at 200 feet above TDZE, you’re 3816 feet from touchdown. That touchdown zone should be 1000 feet down the runway, so you’re essentially 2800 feet from the threshold. If you can see all 24 bars when you reach DA, you have just over mile of vis. Land.

If you can only see to the roll bar at this point, you have 1800 feet of visibility—less than mile, which may be enough on some approaches but is typically cause for a missed approach. Note that it’s the furthest lights you see that tell you the visibility.

Ten More Types?
Yup, all that on one ALS and there are 10 more to go. Relax. Seven of ‘em are variations on the ALSF-2 you already know. Three more are of the less common, but similar, ALSF-1.

All this light isn’t necessary all the time. So airports with ALSF-2s can cut the electric bill. Kill the red side-row lights, the 500-foot barrette, and the first 1000 feet of white centerline lights and you get something that’s 1400 feet long with only white lights. The sequenced flashers still run, but for the first 1000 feet they’re all by themselves, giving them a new name: Runway Alignment Indicator Light, or RAIL. This reduced configuration of RAILs and the rows of white lights only employ every other row, so they’re 200 feet apart.

The ALSF-2 is “Approach Lighting System with Flashers, version 2” (or “for Cat-2” depending on who you ask). The 1400-foot, truncated version is the “Simplified, Short, Approach Lighting with RAIL,” or SSALR.

Most ALSF-2 systems have five intensity levels, or steps in ATC vernacular. Cat-I airports only need the first three. This means their lights can only reach medium intensity at full brightness, so when they truncate it’s not an SSALR, it’s a MALSR. The “M” is for medium.

Some runway/approach combinations don’t need more than 1400 feet of lights, or physically have no room for them. Four systems are essentially permanently truncated ALSF-2s. The 1400-foot setup with five intensities but no strobes is SSALS. Medium intensity makes it a MALS. Put back in a short line of three strobes up to the roll bar and it becomes either a SSALF or a MALSF. The “SF” indicates “sequenced flashing lights.”

ALSF-1 is less common by far in the U.S., and is the same as the ALSF-2 up to the last 1000 feet. The ALSF-1 loses the red side-row bars and puts a wing-shaped pattern of red lights in the last 200 feet to the threshold. These are the “terminating bars” in 91.175. Now you know something those just parroting the regs don’t: you might see red side-row lights (ALSF-2) or red terminating bars (ALSF-1), but never both.

Oddly the ALSF-1 never gets simplified. But it can be shortened. It becomes 1500 feet long and called the SALS. Some keep a few flashers more and are the SALSF. Note the “SALS” and “SALSF” versus the “SSALS” and “SSALF”; the double S means the parent system was an ALSF-2.

If your approach is an ILS or LPV with minimum visibility less than 3/4-mile, then it must have an ALSF-2 or -1, a SSALR or MALSR. Interestingly, for higher visibility minimums an ALS is only “recommended” by TERPS, not required. So don’t assume there will be any ALS for those approaches. This is a good reason to know what ALS to expect … or what not to expect.

The 11th and last is the Omni-Directional ALS, or ODALS, which gets the Monty Python “And now for something completely different” award. Part of the ODALS is Runway End Identifier Lights (REIL) you’ll see on many runways, even with other ALSs. REIL are two, omni-directional flashers on either side of the threshold. Add a 1500-foot RAIL leading to the threshold but with no other solid-burning lights and you get an ODALS.

You don’t see a lot of these systems, which is another reason to check which ALS you’re looking for as part of your approach briefing. Suddenly seeing an ODALS when you were expecting a familiar MALSF might introduce doubt about whether you’re even looking at a runway at all—and that’s not something you want when mucking about at MDA in low visibility.

Asking for More, or Less
Briefing the approach lights has one additional benefit: It reminds you to make sure they’re set the way you want. With an uncontrolled airport and pilot-controlled lighting, it’s almost always a good idea to reset the 15-minute timer for lights with seven mic clicks passing the FAF. You can often turn them down if needed later on. See AIM table 2-1-1 for the secret decoder ring of mic clicks.

At towered airports, don’t be shy about asking them to turn up the approach lights if you’re thinking the ceilings are tight. If it’s an ALSF-2 or has “SS” in the name, there’s the fifth setting for brightness that’s not automatically turned up as it tends to overheat the bulbs. But most of all, show the ALS the respect it deserves. Chances are you’ll be happy to see it after a long day in the clag.

When you find the spot where you can just see them over the glareshield from your normal seated position, measure the distance back to the pilot seat. Next measure the distance from the ground up to your eye level in the cockpit. You now have the level-attitude cockpit cutoff for your aircraft.

If you find the distance you can see is 12 feet from your seat and your eyes are six feet in the air, you have a 2:1 ratio. So if you were 200 feet up at DA, you probably can’t see anything in the first 400 feet in front of you. There is some variation with pitch attitude, and you can do some testing in flight to see, but it’s a handy number to have when you’re thinking about what to expect. Some aircraft will have an entire ALSF visible at DA, while others won’t see the first third of it. The cockpit cutoff can also help with landing flares, but that’s another article. —JVW

Jeff Van West likes approach light briefings, although he struggles sometimes to keep them shorter than the actual approach.