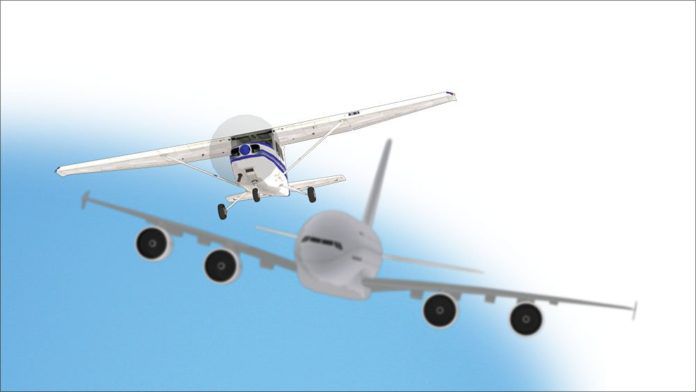 Instrument training is naturally geared towards technology-heavy procedures like ILS, VOR and RNAV approaches. In poor weather these instrument procedures are the only way to land, but when the weather’s good, there’s another option.

, a favorite tool of pilots and controllers alike. It relies on your private pilot basics: how to spot an airport, follow another aircraft to it, and set yourself up to land. Once told by ATC, “Cleared visual approach,” you are authorized to navigate to the airport by reference to the world outside your windows. No “flying the needles” or complicated procedures. Just look and go.

Still, don’t let its basic nature deceive you. Lying in a gray area between IFR and visual flight, it is a true IFR authorization with clear regulations—and a few tricky details.

Basic Mechanics
Before ATC can clear you for the visual, they need you to visually locate either of two things, one of which is obviously the airport. The controller will prompt you and tell you where to look: “Report the airport in sight, two o’clock, niner miles.” If you pick it up before ATC asks, speak up. It can expedite ATC’s planning.

Once you call the field in sight and ATC has resolved any traffic conflicts, the controller can clear you. Towered airports require a runway to be specified: “Cleared visual approach, Runway 36.” That authorizes you to maneuver and descend as you see fit to land on that runway. At some point, you’ll be switched to Tower for your landing clearance.

For uncontrolled fields, no runway is specified: “Cleared visual approach, Homestead General Airport.” Without a control tower, you pick the runway and sequence yourself with any local traffic via the UNICOM frequency. It can be useful to the controller if you tell him your intended runway in your readback: “Cleared visual approach, Homestead General. Planning Runway 36.”
The second thing you can report in sight? Any traffic that ATC wants you to follow.

Imagine: ATC is vectoring you for a visual approach to runway 36. Your GPS shows you 20 miles out with eight miles visibility. The controller tells you, “Traffic, twelve o’clock, four miles, Cessna Caravan, 2000 feet, eastbound.” You look over your nose, and sure enough, you spot it and report it in sight. “Follow that traffic,” ATC says, “Number four, cleared visual approach Runway 36.” Uh, what? You don’t even have the airport in sight, but you’re cleared for a visual approach to it? Is that even legal?

Sure is. ATC needs you to spot either your preceding traffic or the airport, not necessarily both. Courtesy of FAA Order 7110.65—the air traffic control book o’ rules—paragraph 7-4-3 (c) (2), ATC can clear an aircraft for a visual approach when “The aircraft is to follow a preceding aircraft and the pilot reports the preceding aircraft in sight and is instructed to follow it. NOTE: The pilot need not report the airport/runway in sight.”

The “NOTE” is critical. As long as you have your preceding traffic in sight, you need not have the airport itself in sight. Thanks to this rule, at major airports such as Atlanta Hartsfield and Los Angeles International it’s common practice to have one aircraft follow another, which is following another, which in turn—yes—is following yet another, extending twenty to thirty miles out from the airport. It’s just another application of visual separation and accommodates a tremendous volume of aircraft.

Of course, it has to be done with some common sense. A controller can’t very well put a Boeing 747 three miles in trail of a 90 knot Cessna. If your closure rate looks high, don’t be afraid to ask ATC what your traffic’s ground speed is so you can adjust accordingly.

In fact, ATC will use speed control as a normal and common tactic to ensure proper traffic spacing: “Do not exceed 120 knots,” or “Maintain 150 knots or greater as long as practical.” They may also give you pattern entry instructions such as, “Enter mid-field left downwind.” or “Square your base turn to final.” You may be guiding yourself, but you’re still part of the controller’s larger picture.

Missing the Point
Instrument approaches are strictly defined with fixes, frequencies, altitudes, missed approach segments and more, all clearly spelled out on the approach chart. The visual approach, on the other hand, intentionally lacks all of that structure because it’s supposed to be flexible.

A visual approach may seem like VFR since you’re referencing the outside world, so the idea of a go-around can be confusing and it has generated a lot of misinformation. Because you are still on an IFR flight plan, a go-around is considered an IFR departure and language in both the 7110.65 and the AIM back that up. If you go around, let ATC know. They will tell you what to do next. It’s their call.

At a controlled airport if things are flowing smoothly, the tower may just keep you in the pattern for another try. By visually sequencing you with other local traffic, the tower is providing “appropriate” separation.

If there is additional traffic inbound, the traffic pattern is full, or you happen to be flying something larger or faster than the rest of the crowd, the tower will likely send you back to the radar controller for sequencing vectors to another visual approach. They’ll assign you an altitude and heading that will establish and maintain the requisite three miles horizontal or 1000 feet vertical from other IFR aircraft and obstacles.

At an uncontrolled field where you did not cancel your IFR clearance, AIM 5-4-23(e) states: “…aircraft are expected to remain clear of clouds and complete a landing as soon as possible. If a landing cannot be accomplished, the aircraft is expected to remain clear of clouds and contact ATC as soon as possible for further clearance.” Tell your last controller that you went around; he’ll get you sorted out. But, if you did cancel your IFR clearance, you’re entirely on your own. Stay in VMC, complying with VFR.

On Your Shoulders
On an IFR clearance ATC is required to keep you clear of all obstacles. But when ATC issues a clearance with the word “visual,” such as “maintain visual separation,” or “maintain VFR,” or of course “cleared visual approach,” they transfer separation responsibility to the pilot. On the visual approach, you proceed visually and descend at your discretion. It’s on you to avoid other traffic, terrain, towers, antennas, etc.

If you are being sequenced behind another aircraft, there are two levels of responsibility transfer. AIM 5-4-23 (d): “If the pilot has the airport in sight but cannot see the aircraft to be followed, ATC may clear the aircraft for a visual approach; however, ATC retains both separation and wake vortex separation responsibility. When visually following a preceding aircraft, acceptance of the visual approach clearance constitutes acceptance of pilot responsibility for maintaining a safe approach interval and adequate wake turbulence separation.”

Say you’re number two behind a regional jet you haven’t spotted, but you do have the airport. ATC may clear you for a visual approach, but they must ensure you have appropriate wake turbulence and IFR landing separation behind the RJ. If you do get the jet in sight and are told to follow it, the wake turbulence and landing spacing falls on your shoulders.

Even under ideal weather conditions, you might lose sight of the preceding aircraft in the glare of the sun, or ground clutter during the day or surface lighting if you’re overflying an urban area at night. Throw a few clouds or haze in the way and the challenge increases.

Once you accept the visual, the controller believes you’re providing your own spacing, so keep ATC in the loop. If you lose your traffic, don’t panic. Take another look. Give it a moment to try to reacquire it. If you don’t get it in sight in a few seconds, advise the controller. He may reissue you the traffic, or he may re-vector you for sequence if spacing gets too tight.

Visual approaches blur the lines between IFR and VFR flight. They demand vigilance, good judgment, and—when things don’t go as planned—quick action from both pilot and controller. This most common of IFR approaches has its own set of idiosyncrasies, but overall makes life a lot easier on both ends of the radio.

Weather Minimums
Instrument approaches have visibility and ceiling restrictions to keep pilots safe. Visual approaches have their own set of minima, but their enforcement rests more on ATC’s shoulders than the pilot’s.

For vectors to a visual approach, the ceiling must be at least 500 feet above the Minimum Vectoring Altitude. With an MVA of 1500 feet and a ceiling at 1800 feet, controllers can neither advertise nor offer visual approaches. On initial contact, and via the ATIS, arrivals are told to expect an instrument approach.

But, there is a workaround. In the example above, the ceiling’s kind of low, but the airport is still VFR. The controller may tell you “Expect ILS runway 36 approach,” as required, but descend you below the cloud layer to the 1500 foot MVA close to the airport. If you get it in sight, the controller can clear you for the visual.

This is a fine line. The AIM specifically states that a visual approach must be conducted “clear of clouds.” To assure safety, if you have any doubt that you’ll keep the airport or your preceding traffic in sight, you should request an instrument approach.

If the field is IMC—the ceiling is below 1000 feet or visibility less than 3 miles—there is no workaround. Only published instrument approaches and the legalized “scud-running” (contact approaches or Special VFR) are permitted. Even if you’re vectored over the field and get a peek at the airport through a “sucker hole” in the clouds, it’s a no-go on the visual, no matter how much you beg. —TK

Tarrance Kramer “maintains visual” from the cockpit and out the tower windows somewhere in the Deep South.