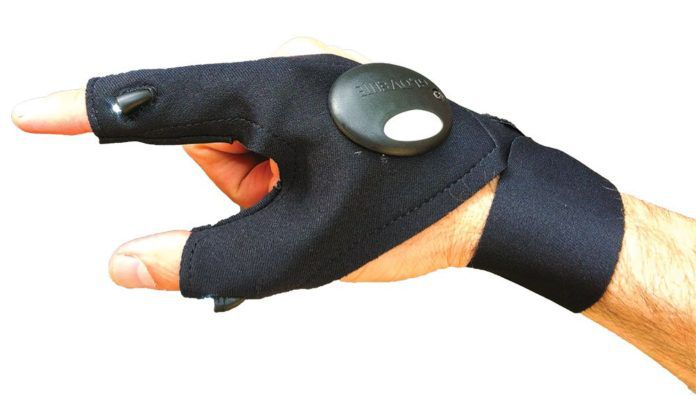 The GloveLight gives a whole new meaning to having a flashlight on hand. A couple iPhone apps also make your chart-reader double as a cockpit and preflight light.

Paul Smith was boring through the dark of night in a Cessna 182, heading in to Shelton, Wash. He kept fumbling with his red-lensed flashlight to read his charts or write something on his kneeboard and, in that great entrepreneurial spirit, thought, “There has to be a better way.”

Fast-forward to 2007 and Smith has a patent and a Mark I version of his product: a partial glove, wrapping only the forefinger and thumb, with a little LED light on each and a button between them. Push the button and light shines off both finger and thumb to illuminate wherever you point.

In 2008, when I tried a few sample GloveLights in my role as managing editor of Aviation Consumer, I wasn’t impressed. The stitching was uneven, the wrap too tight for comfort (on my relatively slender hands) and the wiring failed on one of the three units we tried. We declined to even write it up for the magazine.

GloveLight 2.0
The lack of coverage didn’t hurt Smith a bit, and I saw the GloveLight on the hands of a couple other pilots who just loved it. Really? Is this the same product?

Yes and no. Smith freely admits the early lights had exactly the problems I saw and offered a Mark II GloveLight for testing. I needed to go out and get some night flying in anyway, so I gave it a whirl.

The improvement is significant. Fit is much more comfortable and the side against your skin is better finished. It’s still a bit sweaty in a really hot cockpit, but that’s not so much an issue at night. The light on the finger might need some tweaking to get the position so it doesn’t rub.

The GloveLight really shines (pardon the pun) for reading unlit controls such as dimmers or circuit breakers in night cockpits. Obviously, in an old-school cockpit, it’s good for seeing anything, even pointing a finger at unlit instruments in the event of power failure.

It’s also good for writing. Neither of the lights shines directly where your pen hits the paper; however, there’s enough reflected light off the page that this isn’t a problem. You can also twist the exact position of an LED as suits your hand and writing position.

The best part of the light, though, is that you can put it on and forget about it until you need it. You don’t have to hold it with one hand while you try to do something else, and you can’t drop it.

Each GloveLight costs $19.95 and you specify right or left hand. If you want a GloveLight for each hand, you get the pair for $39.95. LEDs come in white, green or red (but each GloveLight is one color only), and the sizing is medium, large or “over-glove.” That last one is designed for thick work gloves, but would also work for warbird, ex-military, or other pilots whose hands feel naked without Nomex over their hands.

The company also says the two 2016 watch batteries last about eight hours with continuous use. Replacing them requires a fairly simple unscrewing and replacement of a small cover. Incidentally, you can replace the pair of 2016 batteries with a 2032 and get a dimmer light that lasts longer.
I tried the white light and found it no problem in terms of night vision. The

LEDs are so small and directional, they don’t shed much light up at your eyes unless you try to rub your face and forget to turn off the light first. The company claims the light is completely waterproof and machine washable. If they’re wrong, there’s a lifetime guarantee. The company’s website is www.glovelite.com.

Phony Light
Any cellphone with a light-up screen makes a functional flashlight in a pinch. It often won’t stay lit unless you get in on a screen that doesn’t auto dim, however. Any iPhone or Andriod aviation charting app set to show predominately white en route charts or approach plates will do the job, but a flashlight app sometimes does it better.

I like Aviator Light (Aviator Light HD for iPad). Launch it and you get four color-choices for a full-screen light, plus two strobe options. One is just a constant strobe while the other flashes an SOS. Could be handy if you put it down off-airport at night and await rescue. (There’s also a quick reference for ATC light signals in case you ever need it.)

The app works well, and the diffuse light of an entire iPhone lit to some color casts a pleasant glow over whatever you have to see in the cockpit. The app is all of $0.99 for the iPhone and $1.99 for iPad.

For more of a flashlight on the iPhone 4, I use Best Flash Light. It’s a free app that lights up the camera’s built-in flash as a steady light. It’s shockingly bright for its size and can come in real handy for preflight or something dropped on the floor.

Of course, there’s a good, old-fashion flashlight or headlamp. But the convenience of these two bright ideas is pretty hard to beat.

Jeff Van West got tired of toting around dead batteries in a flashlight case, so now he goes with what’s more easily at hand.