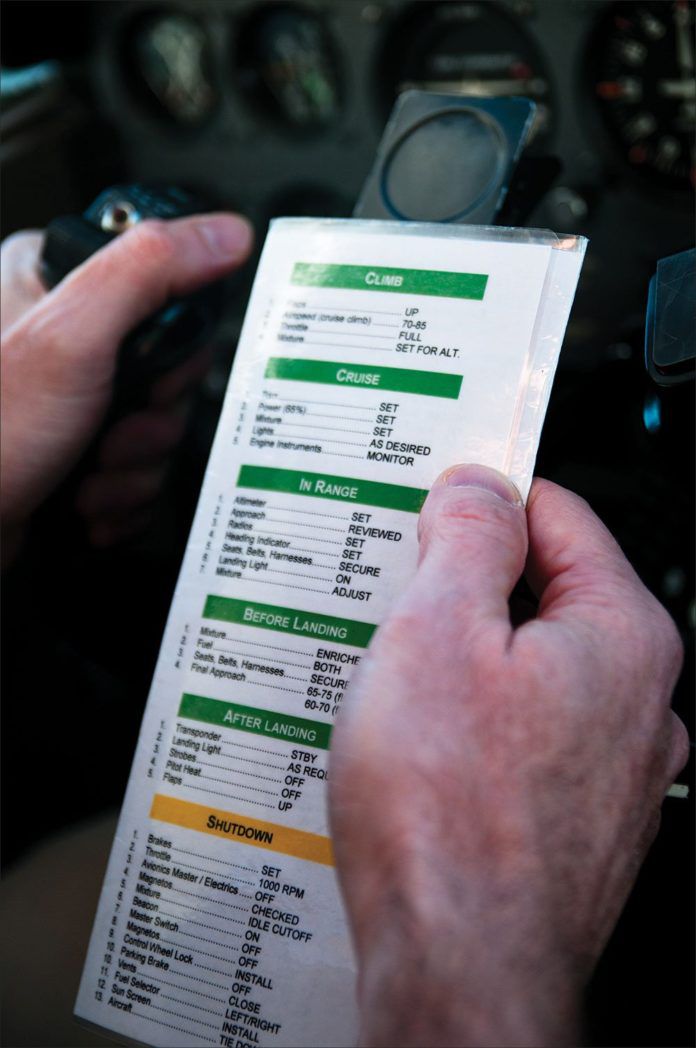 Good habits are an important part of being a safe pilot. Habits encourage consistency, which helps a pilot do the right things at the right times. But there are dark sides to habits. Even if we do the right thing at the right time, it’s easy to miss something if we’re distracted while mindlessly performing our habit. Or, a normally good habit can be absolutely the wrong thing if invoked at the wrong time. Plus, any habit done by rote without recognition or thought can be dangerous. Perhaps worst, if we’re performing these habits without monitoring them we can slip into bad habits.

Distraction Errors
When we’re doing things as habits without thinking, distractions can easily cause us to miss steps. It’s common, for instance, to get the handoff from tower to departure just as we’re mindlessly doing our after takeoff chores. The interruption makes it’s easy to miss a step and mindlessly soldier on, overlooking small items like lights or fuel pumps.

Sometimes distractions can cause a pilot to forget the most ingrained process or procedure. Every year a surprising number of pilots land with the gear safely stowed in the gear wells—quite often the result of a simple distraction.
One pilot we know had the good habit to extend the landing gear at the FAF to initiate the descent. One time when he reached the MDA he added power to level for a circle to land. He subsequently landed gear up. When asked why it happened, he said, “I must have retracted the landing gear without thinking when I added power.”

This pilot was so distracted by circling that he never did his final GUMP check. The nature of habits is that we’re often not thinking and can easily overlook missed steps when we’re distracted.

Think About It
Possibly the biggest reason habits get dangerous is that we execute deeply ingrained habits without thinking.

I used to commute daily by airplane. I’d fly the GPS RWY30 approach with a circle to land Runway 12. One unusual day runway 30 was in use. I reached the circling altitude and did what I always do—started a circle. Tower asked what I was doing. The ATIS specified Runway 30, I was cleared to land on 30, yet my circling habit prevailed absentmindedly.

Similarly, I owned one airplane for 23 years. In my new airplane I often answered ATC with my previous tail number without realizing it. Worse, one night I heard my old airplane get an approach clearance and I acknowledged the clearance with my current call sign, all without thinking.

Not only can your mouth betray you by saying familiar but incorrect things, your ears can hear what they expect when something completely different is actually being said—like me missing the landing clearance, above. I’ve also noticed when I copy a common clearance, I can write down and read back the normal clearance I expect instead of an unusual clearance I actually got that time. I now write down the clearance I expect ahead of time. then compare that to the actual clearance as I get it to ensure that I have the right clearance.

Habits, even usually good ones, can cause complacency and become bad habits in other situations. Take the pilot who usually flies GPS approaches with no timing requirements. But this time he was flying a timed VOR approach. Avionics set and verified, approach commenced, descent started. Shortly after those habits, he realized he’d neglected to start the timer. Everything he did was good, but he’d gotten out of the habit of timing and running a checklist.

Another pilot was used to operating from an airport with parallel runways where the departures began with a turn away from the other runway. Operating from an unfamiliar airport, also with parallel runways, the pilot overlooked that this SID called for a right turn for both runways. Departing from the left runway our hapless pilot followed his usual habit and started a left turn.

Manage Your Habits
Be mentally involved in every task or decision. As one of our pilots put it, “Habits are good, but performing habitually, without thinking, is bad because it removes the situational awareness and thinking processes.” Think about each item before you do it. Know why you’re doing it, what the expected result is and how you’ll verify it. Only after you’ve thought it through, execute and verify the results.

That verification step is critical. How often do we do the right thing at the right time, yet not verify the successful outcome from our actions? It’s common, for instance, to put the gear down and not wait to verify the “down, 3 green” as the final confirmation that it’s OK to continue. If it weren’t for the reliability of today’s systems we’d have a lot more gear up landings after putting the landing gear down.

Examine your current habits. If they’re not appropriate, change them or trash them altogether. If you execute habits without realizing what you are doing each and every time, it sets you up for an error.

It’s also important to note in this context that “habits” extend to all of the operations and choices a pilot makes. Every time a pilot pushes out to minimum fuel, lands in a stronger crosswind, descends below MDA or plans a flight without a reasonable alternative, he’s creating habits. History has shown us that pilots who are successful pushing those kinds of habits are the ones more likely to someday go too far.

Check ‘em
Pilots should use checklists to ensure that all required tasks are addressed in the correct order. But checklists are not a panacea for avoiding mistakes and might allow you to do the wrong thing at the wrong time, but by the checklist.

Don’t just read or recite each item and mindlessly go onto the next one. Think of the process as if you have a copilot reading the check list to you. He calls out each item, you think about it for a moment to verify it’s the right thing to do, (perform the action if you’re using a “do” list), and then verify that you’ve done it correctly.

When you’re distracted it isn’t unusual for checklist items to be missed or done incorrectly. After any interruption you should start over at a logical point well earlier in the checklist, or even at the beginning. That will ensure you cover anything you might have missed otherwise.

Everyone gets stressed and distracted at times. There’s no easy answer on how to avoid those pitfalls other than to slow down, take a deep breath, and methodically think through the steps. You’re always better off doing things correctly rather than doing them quickly. In fact, one axiom of getting rushed is that it’s often necessary to slow down to go faster because rushing causes mistakes that have to be corrected.

The most important take-away in all this is that habits are good, but slavish adherence to any habit without understanding what you are doing and why you are doing it is dangerous and potentially fatal. Take your time and think before you act. Or, as my wife says, “Keep your head in the game.”
Joe Shelton is an expert on good habits after all the bad habits he had to break while flying his Columbia 400 around Northern California.