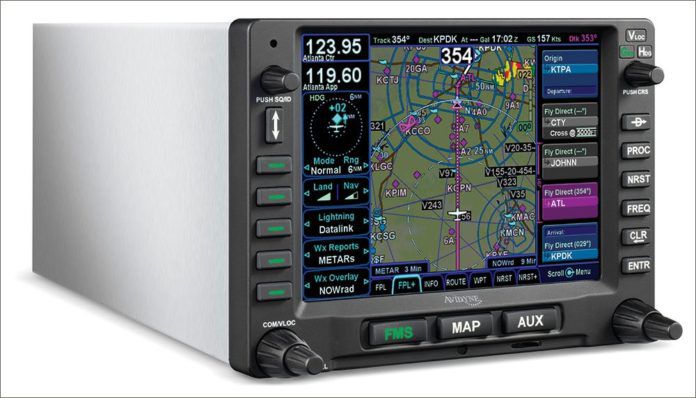 From my bench at the avionics shop, I see a lot of interest in Avidyne’s new IFD-series navigators. Many potential buyers are intrigued by the ability of the IFD540 and smaller IFD440 to slide into an existing Garmin GNS 530 or 430 installation, without the significant expense of rewiring the interface. This plug and play avionics upgrade concept is far from new. But what is new is Avidyne’s approach to making IFR flying easier, with an advanced FMS feature set that has step-saving flight planning features and a combination of touchscreen and traditional controls.

Maintaining Control
Following the lead from other Avidyne products, the bezel controls on these new navigators are designed for simplicity. The design was obviously borrowed from the screens in the Entegra integrated avionics suite and the EX-series retrofit MFD. As one would expect from a modern system, there’s a USB port for loading software, nav data and charts, including approach charts.

Keeping with the latest trend in advanced panel-mount avionics, you can operate these units with a touchscreen, which we’ll get back to shortly. Avidyne also provided full-function rocker-like bezel keys and controls that seem quite logical and have a positive feel.

Since the IFD units have on-board comm and nav radios—there are models planned that do not have the radios—there’s a dedicated rotary volume knob that serves double-duty as a power switch. This is followed by a frequency flip-flop button. For some reason I’ve yet to grasp, Garmin eliminated the power switch on their GTN-series touchscreen units. If the installing shop powers the unit through circuit breakers of the type that cannot be manually pulled, pilots have no way of shedding the systems load in an emergency. Kudos to Avidyne for leaving the power control on their unit.

There’s also a familiar frequency tuning knob, though touching the frequency field on the screen brings up a direct-entry numeric keypad for frequency entry. Avidyne says that the presence of a secondary IFD in a radio stack can serve nicely as a QWERTY-style data-entry screen, with data cross-filled into the primary unit. This data sharing cross-fill feature was successful with Garmin’s GNS units and should be equally handy on the IFD units.

The right side of the bezel houses a cursor key, FMS function keys and nav source buttons for commanding CDI course data on a PFD, an HSI or traditional navigation indicator that has a course resolver. Remember, these boxes are designed to drop in and play in an existing Garmin GNS installation, so basic interfacing, including remote CDI, must be the same as it was with the Garmin stuff. Limitations from the original are the Achilles heel of replacement upgrades like this. Last, the bottom of the bezel houses no-nonsense page tab function keys for jumping directly to the unit’s FMS, map and aux input pages.

Touch or Twist
Avidyne believes that users want a navigator that requires as little interaction as possible—thus their suggestion that the new IFD-series reduces user input by 50 to 75 percent. That should translate to a lot less heads-down time programming the navigator. The IFD has roots stemming from advanced applications, mainly the Entegra R9 advanced integrated glass cockpit, which has performed well in higher-end aircraft including Piper Meridian turboprops. The Entegra R9 has also been a desirable upgrade for existing Cirrus models with older Entegra systems and Garmin radio stacks.

Like the R9, think of the IFD540 and smaller IFD440 as mini flight management systems (FMS) rather than a GPS navcomm. But the real news with Avidyne’s IFD units is the user-input design that has a combination of touchscreen and traditional button and knob input.

Avidyne calls the user interface Multi-Touch. For the prevalence of touch technology in our daily lives, pilots remain skeptical about primary avionics based entirely on touchscreen operation. While primary operation via touchscreen on Garmin’s GTN navigators isn’t proving to be a problem, a recent owner survey in sister publication Aviation Consumer revealed at least some owner difficulty with touch operation in turbulence. For this reason, the IFDs hybrid operation could prove to be more versatile, perhaps even reducing workload.

Avidyne gives the user an option with the IFD navigators. Full control is possible from either the touchscreen or traditional buttons and knobs. Moreover, you can even turn off touchscreen functionality altogether. The 540/440 touchscreens use capacitive technology rather than resistive touch, so for cold-weather flyers, Avidyne says the screen will work with many styles of gloves.

More Pixels=Better Display
Users of modern avionics demand high-resolution display technology and the IFD, just like the screens in the R9 glass cockpit, deliver a brilliant view. These days, high-quality displays are a near necessity, especially for playing satellite weather graphics or making use of high-resolution functions, such as Avidyne’s integrated terrain and topographical mapping graphics.

Even the smaller IFD440 can display all 65,535 colors on its pixel-endowed 640×235 4.8-inch diagonal touchscreen. While this might seem small in comparison to the IFD540, its screen clarity is the saving grace. Compare that with the 240×128-pixel, 3.8-inch diagonal, eight-color TFT screen of the GNS 430 that Avidyne hopes it will replace. You can think of the IFD440 as a space-saving alternative to the IFD540 and a strategic drop-in upgrade for Garmin GNS 430 units.

Graphical Flight Planning
I’ve found the key to building intuitive avionics is a shallow menu structure. As a technician who’s witnessed countless deer-in-the-headlight stares from new users trying to navigate the complex menu structures of newly-installed avionics, I’ve concluded less is better. In the GTN-series navigators, Garmin bails out the weary user with a dedicated HOME key. Avidyne works hard to avoid the trap in the first place, with bidirectional keys and straightforward screen labels.

Avidyne carries over a feature from the R9 that’s called GeoFill. When entering and editing waypoints, GeoFill uses position to accurately guess the next waypoint in a flight plan after only one or two letters. It worked perfectly every time when I tried it. No more tedious scrolling through meaningless identifiers for the one you want. GeoFill significantly eases data-entry workload.

Speaking of high workload, a bugaboo for many users is amending flight plans on the fly, but the Avidyne IFD attempts to eliminate that frustration with limited amounts of required data entry. That’s where the touchscreen pays dividends. Simply touch any intersection, airport, VOR and so forth on the map display to add it to your flight plan.

WAIT AND SEE
Avidyne’s new IFD-series navigators, which could be available this year, have piqued the interest of would-be buyers looking to freshen up their existing Garmin panels while making use of Avidyne’s advanced FMS functionality. Garmin’s world-conquering GNS products have proven themselves many times over, bringing capability and user friendliness that gets the job done for a variety of missions. Can Avidyne build on this track record while simplifying our instrument flying with the IFD series? Will the product line’s enhanced capabilities be worth the wait? Time will tell, hopefully this year.

Larry Anglisano is managing editor of our sister publication, Aviation Consumer magazine, and works as an avionics technician.