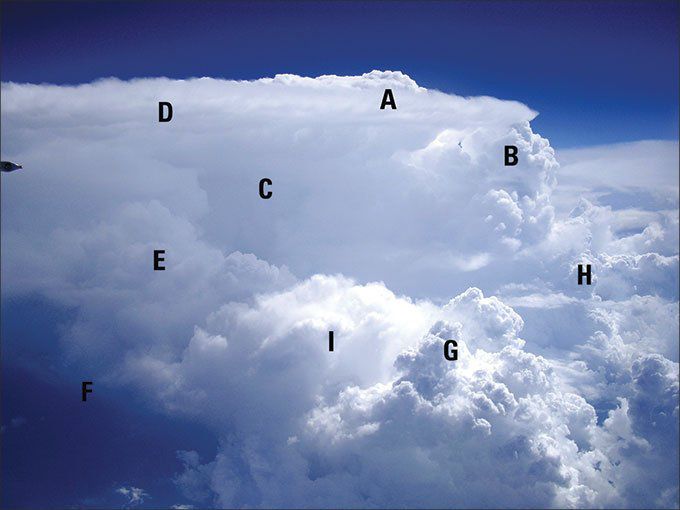 Every seasoned pilot occasionally finds a stubborn thunderstorm blocking the path like a bully in the schoolyard. We wonder not only where to deviate but what’s on the other side. If you have a weather display, you’ve got a better idea of what lies ahead, but there’s always uncertainty about how safe it is to cross the area. An understanding of thunderstorm patterns and ingredients, and considering the basic meteorology pattern of the day is what you need.

Ingredients
There are only two fundamental building blocks of thunderstorms: the updraft and downdraft. The updraft dominates the early and mature stages of a thunderstorm cell and is made up of cauliflower-like cumulonimbus towers. The downdraft occurs in the mature and dissipating stages of a storm cell, and contains mostly precipitation. The precipitation area is normally topped by a broad, glaciated anvil cloud.

Now let’s zoom out a bit and look at the bigger picture of air masses and fronts. As we all know, the atmosphere gets quite chilly with height. But if the atmosphere cools at an unusually fast rate with increasing height, it is said to have a steep lapse rate, and this in turn makes the atmosphere unstable, favoring deep vertical motion of air. Without any moisture, all we’ll get is deep thermals billowing off the ground. A clear summer day in Phoenix is a good example of this.

If we have both steep lapse rates and significant moisture in the lower levels, instability is increased, creating very buoyant thermals, but also saturation is likely. This will produce clouds, rain, and possibly thunderstorms depending on how much moisture there is. The low-level moisture is what’s most important, though mid- and upper-level moisture sometimes produces elevated storms that can be quite potent along the western slope of the Rocky Mountains.

Putting it together
If you know there will be storms along your planned route and it seems like it’s unstable with plenty of low-level moisture, you have all the storm ingredients you need. But how will things play out? Will you be able to pick your way past them? How long will it go on?

The biggest factor shaping a storm area is the strength of low-level boundaries like fronts. A cold front is usually the strongest and steepest low-level boundary. Strong low-level boundaries favor linear development along the boundary and little elsewhere. It’s uncommon that there are persistent stray storms away from the main line, so finding a way around or through the storm will usually get you out of the danger zone. If moisture is rich ahead of the storm line, though, be alert because isolated storms may develop out ahead of the line. Those that do develop are sometimes severe.

But if boundaries are weak with no fronts, storms will develop in a haphazard, seemingly random pattern. This is frequently seen in the southeast U.S. during the summer. The storm area is usually quite extensive and you may be picking your way through them for hundreds of miles. To avoid the worst, look for convergence, where low-level winds come together. The more concentrated the convergence, the more focus there will be for storm development. Higher surface dewpoints in one area may favor early development and more intense storms. Another danger zone is areas of high terrain. All of these locations will usually get the lion’s share of the storm activity. In the western U.S., almost all the storms will develop on the mountain ranges, at least initially.

The strength of mid-level inversions can temper the character of storm patterns. Mid-level inversions are most often caused when warm air is lofted from higher terrain of the desert southwest into the central United States, forming a “cap.” Caps are common in the spring and are increasingly rare as you go east of the Mississippi River. The cap is frequently found in the south-central U.S. during early spring, shifting to the north central states by late summer. If the time and season are right, a profound lack of clouds above 5000 feet, a west or southwest wind at 10,000 feet, and “dryness” on water vapor satellite imagery all suggest the presence of a cap. You can also just look at the temperatures at 10,000 feet; if they’re unusually warm and you’re in the central U.S., this probably is a cap.

If a cap is present, it acts to suppress storms until later in the day. If the storms do develop, they have a tendency to be isolated but severe. They’re quite easy for a cross-country pilot to divert around, not only because of the isolated nature of the cells but also because if you’re above 5-10 thousand feet, you’re “in” the cap where the air is almost completely clear and haze-free. But on certain days, upper-level disturbances will approach the area and break down the cap, causing the storms to spread up and down the stronger boundaries and possibly even develop along weak boundaries. These in turn may join together, forming a squall line. Very unstable, weakly capped air favors squall lines, and a squall line is when you want to have a good alternative in mind.

Cold core convection is a type of storm pattern that seems to break the rules. It does not develop in the warm air mass, but rather near the occluded front and in the cold air mass. Cold core convection forms beneath the upper-level low where there are extremely steep lapse rates. If there is some surface heating and a little residual moisture, showers and possibly storms will develop by afternoon. There is usually no axis of formation for cold core storms. They tend to develop along cloud streets and any mountain ranges. They produce strong downdrafts, turbulence, and small hail, but otherwise they rarely produce severe weather. Cold core storms quickly dissipate in the evening as heating subsides.

You may encounter “elevated storms” that develop from moisture aloft and are not connected to the surface air mass. These are most often seen in the cool air just north of fronts and during the morning hours in areas where some rich moisture has worked its way aloft. They have little vertical extent unless they’re associated with a strong frontal system. They are high-based and usually rather weak unless there’s strong heating or instability, which can produce microbursts, turbulence and hail.

Visualization
During your preflight briefing, going by the numbers might work for a local flight. But for a cross-country flight your safety may depend on a conceptual understanding of weather patterns along the route. Are there fronts along the way? Lows and highs? How will it change? The legendary A.M. Weather that aired on PBS in the 1980s and ‘90s was unparalleled for helping pilots visualize conditions. But pilots must now take the initiative if they need to go beyond just copying current conditions.

The NOAA Aviation Weather Center website (aviationweather.gov) is an excellent starting point. But don’t just stick to the SIGMET, turbulence, and icing maps. Go the extra step and check out the regional plots, then relate them to the analysis maps found at the NOAA Weather Prediction Center (www.hpc.ncep.noaa.gov) and the convective outlooks (www.spc.noaa.gov). These will help show you how things are put together.

Even if the actual patterns don’t always make sense, you still get a solid mental picture to take with you on the flight in case you’re faced with an unexpected decision. That’s a lot like pumping iron at the gym: even if you’re not exactly sure what you’re doing: the more you work with it, the stronger you’ll get.

Avoidance Tips
In addition to the safety tips in AIM chapter 7 we covered last month, here are some specific tips for dealing with storm patterns:

Crisp, hard cumulonimbus towers indicate strong updrafts that should be avoided. They likely contain violent turbulence. On the other hand, towers that appear mushy are more likely to have weak updrafts.

Can you see a thousand miles at cruise altitude with storms around you? This indicates likely turbulence. Updrafts and especially downdrafts moving vertically through layers of haze-free, dry air are more likely to be intense due to entrainment and enhanced evaporational cooling. This is especially true from the surface up to about 20,000 feet.

Lightning activity is a good approximation for the strength of the storm, but it is not good for predicting individual elements like turbulence, icing, and hail.
Radar only shows precipitation, so strong updrafts are invisible. XM radar shows all altitudes, not just yours, and there are processing and delivery delays.

Tim Vasquez, a career meteorologist, operates www.weathergraphics.com in Norman, Oklahoma. He hopes someday to have the opportunity to complete a dream and learn to fly.