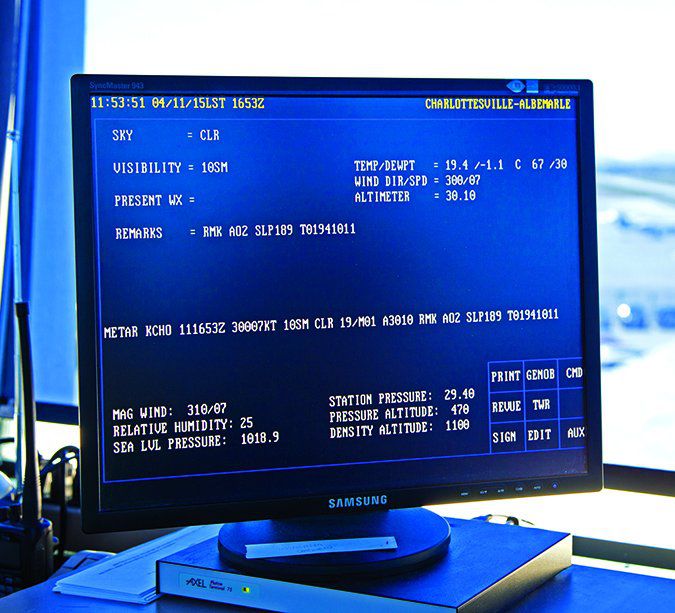 The morning fog rolled across the airport like a vast cotton blanket, smothering runways, parked airplanes and the airport terminal. Within minutes, it pushed up against the tower windows, trying to seal us inside like something out of Stephen King’s The Mist. We quickly flipped on the airport beacon and cut a new ATIS reflecting the obvious: The airport had gone IMC.

With our VFR traffic stuck on the ground or going elsewhere, the tower frequencies fell strangely silent. Soon, however, we started getting other calls. An inbound Delta airliner reached out from 100 miles away. “Hey, Tower. How’s it lookin’?” The landline phone rang. “This is American Airlines dispatch. We’ve got two flights inbound right now. What’s the latest?” A Gulfstream IV on the GA ramp reached out to Ground. “We’re just firing up. Any improvement?”

Each of these folks had one basic purpose—find out if they could safely and legally operate under the current weather conditions. Providing that information quickly and accurately is a significant part of our job as air traffic controllers. The answer comes from a variety of sources, both technological and human.

For the moment, we’ll begin with a nickel tour of both the ATC and the national aviation weather systems. Naturally, there’s some overlap between them.

The FAA air traffic control system is one big ol’ network. The chain of command begins with the ATC System Command Center in Virginia, which provides oversight and coordination between the biggest ATC facilities, the Air Route Traffic Control Centers. The major airports under each Center have their own Terminal Radar Approach Controls (TRACONs), a.k.a. “Approach” or “Departure” to pilots. Finally, we have the individual airport control towers that operate beneath parent TRACONs or directly with Centers.

The aviation weather reporting system has a similar structure. The mother facility is the Aviation Weather Center (AWC), operated by the National Weather Service (NWS) in Kansas City, Missouri. Its mission is to provide “consistent, timely and accurate weather information for the world airspace system.” They generate the Area Forecasts, SIGMETs, Convective SIGMETs, AIRMETs, and other products that feature in your pre-flight briefings. The AWC is complemented by Weather Forecast Offices (WFO) providing local Terminal Area Forecasts and hazardous weather alerts from over 120 locations nationwide. All of their information is available at AviationWeather.gov.

ATC Centers have their own Center Weather Service Units (CWSU) located on-site. The hundreds of controllers within each Center oversee a vast amount of airspace and aircraft. CWSU staff craft a localized weather picture for these controllers and pilots via a variety of weather products, conveying not just the AWC’s SIGMETs and AIRMETs, but generating their own localized Center Weather Advisories (CWA) and Meteorological Impact Statements (MIS). To view each active CWA and MIS, visit AviationWeather.gov/CWAMIS.

And last, we arrive again at the control towers. While some WFOs are co-located with airports, many ATC facilities don’t have dedicated weather personnel. The Limited Aviation Weather Reporting Station (LAWRS) program steps in by certifying tower controllers at some facilities as weather observers. No, we’re not full-fledged meteorologists. However, along with working our air traffic, we’re trained to operate weather equipment and make judgment calls based on what we see out the window. We then generate or modify METARs and SPECIs appropriately to ensure our traffic gets the latest info.

The cornerstone of our everyday weather reporting is our on-site ASOS, or Automated Surface Observation System. There are over 900 systems installed nationwide, working 24 hours a day to generate the METAR and SPECI reports you get during preflight briefings and—if you stay connected in the cockpit—in flight. Of course tower controllers use that same data to record their ATIS broadcasts. Along with the hourly METAR, each system can spit out 11 additional SPECI observations per hour to keep up with rapidly changing weather.

The sensor package located out on the airport grounds covers a broad scope. Its core metrics are the usual wind, visibility, cloud coverage, temp/dew point, and altimeter readings present in every METAR/SPECI. It can also report thunderstorms, obstructions to visibility (fog/mist/haze), wind shifts, and precipitation type and intensity (rain/snow/freezing rain). We monitor and control the system from a keyboard-equipped display up in the tower.

Like all equipment, ASOS has its limits. It can only see straight up and in its general vicinity, so if there’s rain far off-axis, the ASOS won’t detect it. On the flipside, if there’s a single large cloud directly over it, it’ll call the whole sky overcast. That’s where LAWRS-certified tower controllers take over and adjust the data.

The procedures for generating a routine METAR broadcast are straightforward. At 47 minutes past each hour, the ASOS display in the tower starts beeping to let us know it’s preparing a METAR. From that moment, we have five minutes to look out the windows, compare reality to the machine’s readings, and edit the data if needed. At 52 minutes past, it’ll start beeping again to warn us it’s “Transmitting Report,” giving us one final chance to make changes. If we leave it alone, it’ll automatically transmit the METAR at 53, kicking it out into the world’s lap with one final loud beep. We’ll then use that data to cut an ATIS.

SPECIs must be generated whenever we or the system observe a weather change that meets a certain criteria and happens outside of the 47-52 minute METAR time frame. Most commonly, they occur when the visibility or ceiling drops below or climbs above certain values: one, two or three statute miles visibility, ceilings of 3000, 1500, 1000, or 500 feet, or if either go below the lowest instrument approach minimums for our airport. No minimums published? We’ll use 1/2 mile or 200 feet as the criteria. Significant weather events—including thunderstorms, hail/ice pellets, tornadoes/funnel clouds, squalls, previously unreported low clouds, and wind shifts—also require SPECIs, as do aircraft mishaps.

The fog put us at a quarter mile visibility. Since that’s clearly below one mile, it triggered a SPECI. As with a METAR, the system will start beeping when it’s prepping the report and give us the same five minute editing window. After a SPECI is transmitted, controllers must record an accompanying ATIS and verify aircraft on frequency have the current info.

Remember all of those aircraft and airline staff calling us earlier? They don’t need us to get them the latest METAR or SPECI. That’s easily available via our ATIS broadcast, FSS, connected avionics, or company in-house weather resources. So, why are they really calling? Three words: Runway Visual Range (RVR).

RVR is an estimation of how far a pilot can see down a runway centerline. It used to be determined by someone driving out to the runway threshold and counting how many runway lights in a row could be seen. Today, automated sensors located alongside the runway do all the work, calculating the visual range in hundreds of feet. The most basic RVR systems gauge visibility only at the touchdown end of the runway. More complex setups increase the detail, adding sensors for the rollout (i.e. departure end) and midpoint runway sections. The longest runways even have a far-end sensor.

Once the prevailing visibility drops to a mile or less, or the RVR displays a value at or below 6000 feet, controllers must issue current RVR to each aircraft using the relevant runway. Example: “Runway 27 RVR one thousand six hundred, mid one thousand eight hundred, rollout one thousand four hundred.” We don’t have to say “touchdown” for the first value, since it’s implied.

Our ILS approaches are CAT I, requiring a minimum RVR of 1800 feet to be flown legally at most airports. CAT II and CAT III ILS category minimums are lower: 1200 for II and 700/150/0 for IIIa/IIIb/IIIc). Airlines and other operators require the RVR to be a legal value before their pilots can even attempt an approach. The RVR readings update frequently, leading everyone and their mother to call the tower for the latest. We advise them of the trends and try to be realistic about their chances.

Today, the RVR wasn’t looking good for our customers. Touchdown was reading 1600 and 1400 for our runways. The Delta and American flights arrived in the vicinity of the airport. Soon they were joined by other airliners, for a total of seven, all holding at various fixes. Unfortunately, the RVR kept dropping, bottoming out at 800. They waited as long as they could, and all of them diverted. Other airline dispatchers called. When told the RVR, they said they were just going to hold their planes on the ground. The Gulfstream IV remained parked. It was quite the bummer for everyone.

While weather equipment varies from tower to tower, one key component doesn’t: the human element. Even the best equipment can sometimes be fooled. When something doesn’t feel right, we use simple, manual methods to verify what’s really out there.

Let’s take visibility. When it changes rapidly, our ASOS system tends to lag behind current conditions. As the fog built up, the ASOS was still showing two miles of visibility when it was actually a lot less. With the entire airport swallowed up, I needed to report the actual conditions.

I picked up our airport visibility chart. Control towers have these National Weather Service-certified maps depicting numerous landmarks on and around an airport, and their distances from the tower. They have an anachronistic look, but get the job done. I simply looked outside the window for the furthest visible landmark that was depicted on our chart. In this case, it was the southern tip of our terminal building, 1/4 mile away. I edited the ASOS with 1/4 SM and, boom, the SPECI I mentioned earlier was born. Eventually the ASOS caught up and showed the same value.

The human element includes pilots just as much as controllers, which leads me to the next simple method. If we’re not certain about the weather’s details, why not ask someone who’s in the thick of it? It’s very common for us to solicit pilot reports on cloud bases, cloud tops, turbulence, or any number of other weather factors. These benefit all pilots and controllers in the area.

You can make a real difference with your observations. Let’s say we ask you for a base report on final. Our ASOS is showing 700 overcast. You report breaking out at 400, tops at 1200. We’ll call and advise Approach of the actual ceiling, so they can pass it on to trailing aircraft. Then we’ll edit the ASOS to show “OVC004”. Since that’s now below 500 feet, it’ll generate a SPECI, and we’ll cut a new ATIS based off that transmission. Last, we file the PIREP with Flight Service.

When the weather’s IMC, the traffic tends to slow down, but our weather duties pick up. While the fog’s keeping us snug in our tower, we know you and the other pilots out in the soup need timely data. Employing our equipment, our training and our experience, we try to paint a clear picture of bad conditions so you can make good decisions.

On IMC days out in the Midwest, Tarrance Kramer may or may not answer the tower phone with “RVR’s still below 1800. How can I help you today?”