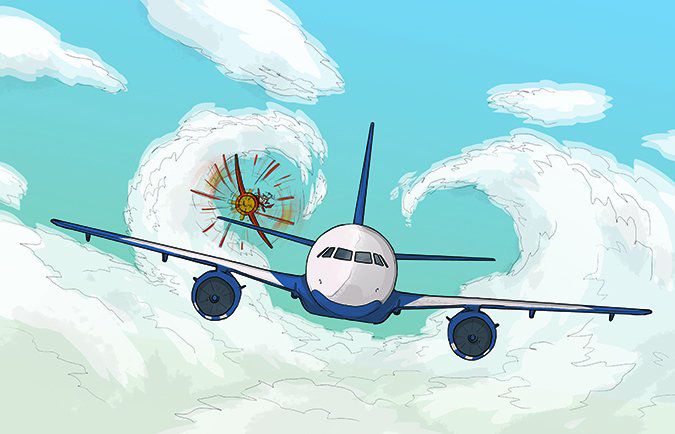 A low morning fog crept onto the airport as I cleared a CRJ-900 regional jet for takeoff. The RJ lifted, passing just above the vaporous wall, and I switched him to Departure. I waited, watching for something I dealt with every day as an air traffic controller, but had never witnessed.

I wasn’t disappointed. The fog’s white mass suddenly parted, two lanes driving through it, each a widening half-cylinder swirling with invisible force, insides darkened by sunrise shadows. The paths dissolved, reclaimed by the mists. However, for that brief moment, I’d actually observed the elusive threat we call wake turbulence.

That was the only time I ever witnessed it. For new pilots and controllers, wake turbulence may seem as relevant as a mythical monster. However, that beast can become all too real when mixing with aircraft of various sizes in the same piece of airspace, and that’s why ATC takes it into account daily.

At non-tower airports, pilots are on their own to gauge the threat of other aircraft. Where there’s ATC oversight, though, the FAA’s rules concerning this invisible threat balance the responsibility between controllers and the PIC.

Aircraft produce their worst turbulence when they’re heavy, slow, and clean. Of course, that’s takeoff and climbout configuration, when they’re fat with fuel, clawing for speed, and all their dangly bits are being retracted.

There are a couple type-specific exceptions. The heaviest aircraft in the skies—the “aluminum overcast” Antonov AN-225 transport and the double-decker Airbus A380 airliner—are each classified as a “Super.” Adding to the complexity, the Boeing 757, while technically a Large, is uniquely shoehorned between the Large and Heavy categories due to its intense-for-its-size wake.

It’s a daunting task for controllers to learn which aircraft fall into which category, considering the sheer number of aircraft types out there. Take the ubiquitous Beechcraft King Air. The Model 90- and 100-series are Smalls, but the Super King Air 200, 300, and 350 models are Small+, which includes most corporate jets. But, some—like the Citation Mustang and Embraer Phenom 100—are Smalls, and the Gulfstream IV is Large.

Controllers treat aircraft within the immediate runway environment differently based on wake category. Many factors can require you to, “Hold for wake turbulence,” including the wake category of a preceding departure, whether the aircraft is departing full length or from an intersection, and the proximity of other runways. FAA Order 7110.65—the ATC reg book—is full of the particulars.

Controllers constantly run “if/then” equations in their heads. If a Small, Small+, or Large aircraft is second at the runway’s end, and the preceding departure is up to a Large, then ATC can clear it for takeoff as soon as the first is airborne. But, if the lead aircraft is a Heavy, 757, or a Super, then all aircraft behind it, regardless of wake category, must wait either two minutes or until ATC can guarantee appropriate radar separation (see chart). That delay cannot be waived.

If a departure’s leaving from an intersection over 500 feet from the end, and any heavier aircraft departs full length (either with the standard flow of traffic or opposite direction), then the intersection departure gets a three-minute wake-turbulence delay. If the preceding aircraft is a Small+ or Large, that delay can be waived—but only by the pilot with a simple, “I’d like to waive the wake turbulence delay.” There are no waivers behind a Heavy, 757, or Super.

Vortices spread laterally outward from the aircraft’s flight path, often helped by the wind. If a parallel runway is within 2500 feet of the departure’s runway, departures on that runway are treated as if they departed from the same strip of concrete. Also, if the flight path of an aircraft departing a crossing runway cuts in front of another departure on a different runway, then intersection departure wake rules might apply.

ATC cannot allow an airborne, smaller plane to do a touch-and-go or stop-and-go within three minutes of a larger aircraft’s departure…unless the pattern plane gets the bigger one in sight. “Skyhawk 23AB, traffic departing is a Beechjet 400. Report traffic in sight.” The goal is to have you see where the traffic rotates, so—on the go—you can rotate before that point, topping the vortices. Otherwise, a full stop or low approach are the only choices.

After you report “traffic in sight”, ATC will likely tell you, “Maintain visual separation from that traffic. Caution wake turbulence. Cleared touch/stop-and-go.” Upon reading back you’ll maintain visual, you accept responsibility for wake turbulence spacing. ATC shouldn’t force you to turn base. This also applies if ATC is having you follow a larger arrival as well, whether you’re in the pattern or on a visual approach. In any of those situations, ATC should let you fly your own path to remain above or otherwise avoid the turbulence.

Radar controllers use pure mileage, rather than time, to ensure aircraft in trail or crossing each other’s flight paths have the appropriate wake turbulence spacing. This is especially critical when sequencing arrivals into an airport, and why approach controllers rely on speed control instructions. The adjacent table breaks it all down. Note: in the radar environment, there’s no differentiation between Small and Small+.

Nature, of course, laughs in the face of mankind’s rules. Just because the FAA created mileage and time requirements doesn’t mean vortices simply vanish once they’ve hit six miles or four miles or whatever’s needed for a particular separation situation. They may take more time to dissipate.

We watched a radar playback briefing the other day where a Cessna Citation (Small+) hit the wake of an Airbus A380 (Super) far more than the minimum eight miles ahead. The vortices rolled the Citation inverted. Its crew managed to recover and continue safely.

If you ever encounter what you think is wake turbulence, first, fly the airplane and recover from its effects. When able, advise ATC. They can see the traffic around you and help steer you clear. A climb may be a good recourse, since vortices sink. Whatever you do, remain calm and don’t make it worse.

In November 2001, American Airlines Flight 587—a heavy Airbus A300 departing New York’s Kennedy Airport—encountered the wake of a previously departed 747. The aircraft were a legal 4.3 miles apart. As the aircraft wallowed, its first officer overreacted, kicking the rudder pedals back and forth to their stops. His violent actions snapped the vertical stabilizer clean off the aircraft. The ‘bus entered an unrecoverable slip and crashed into Queens, killing 265 people aboard and on the ground.

As detailed within the FAA’s “Lessons Learned” accident coverage, the National Transportation Safety Board investigation revealed “that the structural loads that caused the failure of the stabilizer were the result only of rudder pedal inputs, and were not associated with the effects of the wake turbulence encounter.” Had the pilot kept his cool and made minimal inputs, the aircraft would likely have passed through the turbulence unscathed.

RECAT’s Out of the Bag

While this has all been the status quo for many years, the FAA is poised to make a major change in wake turbulence rules. Called Wake Turbulence Recategorization, or Wake RECAT, the FAA fact sheet describes it as “the safe decrease in separation standards between certain aircraft.” That’s right. The FAA wants ATC to run planes closer together, but it’s not as crazy as it sounds. This wasn’t a knee-jerk decision. Over a decade, “experts in wake turbulence, safety and risk analysis determined that the required separation between certain aircraft can be safely decreased.”

This was prompted largely by changing traffic, stretched airport capacity, and updated scientific studies. The existing system was developed before the skies were filled with regional jets like the popular Embraer 135/145 and Bombardier CRJ series. The E135 barely tops 41,000 pounds, but it was counted as equal to a Boeing 737-900 that’s well over four times the Embraer’s MTOW.

The FAA’s studies illuminated that, “in addition to weight, other aircraft characteristics—such as speed and wingspan—also affect the strength of the wake and an aircraft’s reaction to the wakes from preceding traffic.” RECAT therefore takes the heavy and large classes, and subdivides them into four wake categories: two for heavy (B and C), two for large (D and E). The Super (now category A) and Small/Small+ (now category F) classes remain the same. The new wake classifications allow a more refined approach to separation standards.

Under the older system, a huge Boeing 747 following a Boeing 767 half its size would need four miles in trail. Both are Heavies over 300,000 pounds, their weight previously the only defining measure. RECAT allows more detail.

The 747 is a class B Heavy, with a wingspan between 175 and 245 feet. Its twin-engine cousin’s wingspan lies between 125 and 175 feet, making it a C. The more robust 747 now only needs three miles behind the 767. Those single miles add up, especially at major airports handling lots of Large and Heavy traffic.

Unfortunately, RECAT has had the opposite effect on Small/Small+ category F traffic in trail of bigger aircraft. In the past, a Small only needed four miles in trail of any Large aircraft.

RECAT’s Large still lies between 41,000 and 300,000 pounds, and if their wingspan only ranges from 65 to 90 feet (like an Embraer 145), they’re a category E. Any trailing F would still need just the four miles. However, Large aircraft with bigger wingspans—90 to 175 feet—are D classifications (like the Boeing 737), requiring little guys to remain at least five miles aft. Behind a C, B, or A, any F aircraft must follow by at least six, seven, or eight miles, respectively. They also get up to a five-minute delay for intersection departures.

RECAT has only recently begun being implemented. It’ll be a while before it comes to the GA or regional airport near you. However, Memphis, Miami, Atlanta, and a few other high volume metroplexes are already using it. Airlines are definitely seeing benefits from it in terms of increased airport capacity, reduced delays, and fuel savings. While those flying smaller craft—and the controllers vectoring them—must account for increased spacing requirements where RECAT is live, it’s all part of a more scientific approach towards safety.

Tarrance Kramer likes to keep an eye out for that elusive wake menace while working traffic in the Midwest.