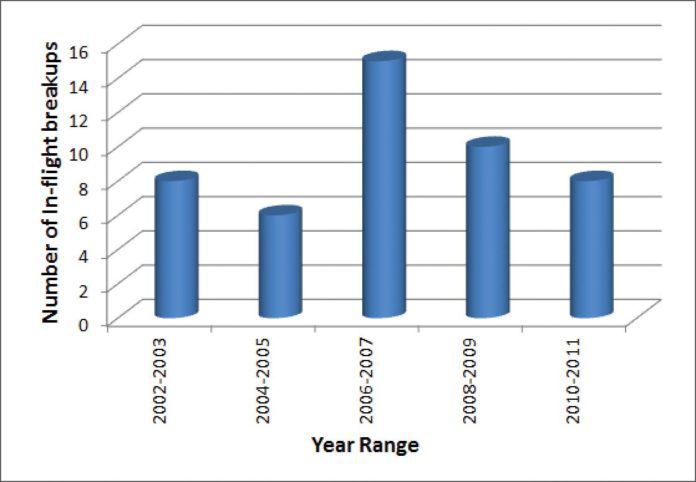 Structural failure accidents, often from getting too friendly with thunderstorms, kill both people and what little good press GA is able to garner. In the last decade, 50 accidents—about 10 per cent of all accidents—were due to in-flight structural failure. Worse, even with better weather data in flight, these accidents aren’t going away.

Turbulence, Not Precip
As we blast merrily along watching the weather on our tablets, we often forget—or simply don’t know—that radar shows precipitation, not turbulence. Exceptionally heavy precipitation, particularly the more solid types, can definitely hurt your airplane, but it’s the turbulence and convection, often outside the area of precip, if any, that can rip the wings off. Add the delays between the real weather and what you see on the tablet and the result may find you uncomfortably close to the heart of the worst of it and forever immortalized in NTSB records.

Of course, severe turbulence is not limited to convection. Flying on the leeward side of a mountain range with strong winds across the range or getting too close to a much larger aircraft can make for some punishing turbulence as well.

The key to safely operating in turbulence, of course, is to avoid exceeding the design limits of the aircraft—typically +3.8 G and -1.5 G for a general aviation aircraft. In your initial flight training, your instructor probably told you to slow to maneuvering airspeed (VA) in turbulence, and to simply keep the aircraft upright while accepting altitude deviations.

We think of VA as a safety valve where the aircraft will aerodynamically stall before something breaks off. In fact a somewhat dated Jeppesen Private Pilot manual instructs students that “VA is…the maximum speed for flight in turbulence conditions.” Since in-flight breakups continue with such regularity, this suggests that we may not have the full story.

This was illustrated in 2001 when an Airbus A300 lost its vertical stabilizer after encountering wake turbulence at a speed well below VA. The NTSB report stated that “…loads beyond ultimate design loads…were created by the First Officer’s unnecessary and excessive rudder control inputs.” As a result, the FAA and NTSB cautioned that “flying at, or below VA, does not allow a pilot to make multiple large control inputs in one airplane axis or single full control inputs in more than one airplane axis at a time without endangering the airplane’s structure.”

Load ‘em Up
Loads are imposed on an aircraft by any combination of pilot control inputs and external forces like turbulence. These forces are additive, so if an abrupt control input results in a 2G load simultaneously with a 2G turbulence load, the aircraft experiences a total 4G load.

You should begin to see that VA isn’t the best speed to use in turbulence, even if this contradicts what you were taught. To illustrate, we’ll use thunderstorms with their strong vertical currents, although the principles apply to any source of turbulence. Seen from the aircraft wing in level flight, a vertical gust creates an increased angle of attack and a corresponding increased force on the wing. If this increased force exceeds the design limits of your aircraft, you may bend or even shed important parts, like wings.

“But,” you might ask, “Isn’t the aircraft supposed to stall at the load limit when flying at VA?” Yes, but there’s a catch. In turbulence, airspeed isn’t constant. In fact, studies by the British Royal Air Force years ago showed that light turbulence may cause short-term airspeed variances of 5-15 knots while moderate turbulence may cause airspeed variances up to 25 knots. Even the FAA is onboard, with a source from the Small Airplane Directorate in Kansas City agreeing that VA provides “no speed margin…to cover inadvertent over-speeds which could result in over-stressing the airplane structure.”

Any combination of airspeed and load factors within the designed flight envelope and your aircraft is structurally safe. But, consider an aircraft at VA in level flight—a load factor of 1G—that suddenly experiences an upward gust generating a 3G load. In a fictional world with the gust having no effect on the airspeed, the aircraft will stall at the limit load factor prior to reaching the load limit of 4G. In reality, at VA a gust yielding 3G will also cause an increased airspeed. Under these circumstances the aircraft is now forced outside of the normal operating envelope risking structural damage. See the sidebar for some science on this.

By now you’re hopefully seeing that VA isn’t the safest speed for turbulence. What is? Transport-category aircraft have a turbulence penetration speed, VB—also known as rough air airspeed—which is slower than VA. VB is the maximum speed at which a gust will not overly stress the aircraft.

The FAA, in 23.333, defines a wind gust as 1,500 or 3,000 fpm depending on flight level. This isn’t a lot of help, and neither is the POH or AFM for most general aviation aircraft because VB isn’t stated. The FAA has considered this and an archeological dig through their web site will yield that VB for most GA aircraft is 10-20 knots slower than VA. If that’s good, you might consider reducing speed even more as gust intensity (turbulence) increases.

But now you might point out that flying too slow in turbulence will increase the risk of an accelerated stall. True, but a gust-induced stall usually is very brief and the wing recovers almost before the pilot realizes that it has happened. Safety is unlikely to be compromised unless the houses are filling the windshield or the aircraft has undesirable stall characteristics.

Not Perfect
Digging deeper, you’ll find that VA and VB are calculated for gross weight, but decrease at lighter weights. This is somewhat intuitive: wind gusts act more easily on lighter objects. Thus, light chop reported by a B-737 will easily shake up your Cessna 172. So, VA and VB are slower at lower weights. For the typical light aircraft slow by 2 additional knots for each 100 pounds below gross weight.

While maintaining altitude is a cardinal rule of IFR aviation, this is one time to disregard this obsession. But, unless you want to do some paperwork post-flight, it’s a good idea to advise ATC and possibly even request a block altitude. If you’re flying an aircraft with retractable landing gear, you might also consider extending it (at the right speed) so it can act somewhat like an additional vertical stabilizer. It also increases drag for better speed management in turbulence.

Here’s one more interesting tidbit: In an aircraft with wingtip tanks, VA does not change whether the wingtip tanks are full or empty. From an engineering perspective, these tanks (empty or full) provide bending relief by exerting an inertia load in the opposite direction to the force of the wind gust.

Naturally, avoiding turbulence altogether is the safest idea. Pay due diligence to conditions ripe for its development—convective activity, strong winds across a mountain range and wake turbulence behind a transport-category aircraft. Nevertheless if you’re unfortunate enough to get caught in severe turbulence, slowing to your VB, adjusted for your current weight, and trying to ride it out might make the difference between something for you to talk about and something for the NTSB to write about.

Douglas Boyd, PhD is a FAAST Representative and member of the Aerospace Medical Association Safety Committee who gives convective activity a wide berth, especially when his son, aerospace engineer Stewart, is on board.

The importance of flying below VA for turbulence penetration is best explained by reviewing a V-G loading diagram for an aircraft in clean configuration. The curvilinear lines represent the maximum lift that the wing will generate for a given airspeed. Another way of stating this is that this curved line also represents the accelerated stall speed (remember the wing can stall at any speed). Thus, the hatched area left of the curved lines represents the stalled region as it exceeds the lift that the wings can generate.

The boxed area shows the normal flight envelope specific to that aircraft. The horizontal lines of the box indicate the positive and negative G load limits of that particular aircraft (typically 3.8 and -1.5 respectively for normal category general aviation aircraft). Fly at any combination of airspeed and G load factor within the solid line boxed area and you run little risk of structural damage. On the other hand, fly outside of the area contained by the box/curved lines but excluding the stalled regions and the aircraft may experience structural damage or failure. —SB

VA and VB are derived as a function of VS, clean stall speed: