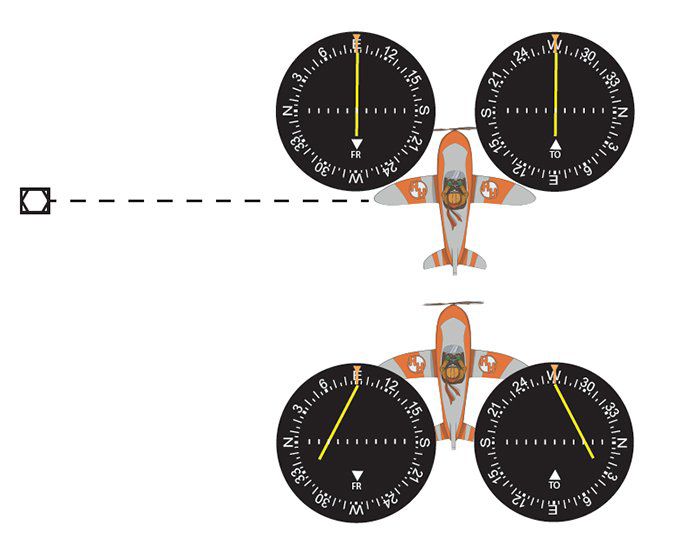 Some of you are already yawning, thinking to yourselves, “With GPS and moving maps, who needs VHF nav anyway?” To an extent, that’s a valid argument, especially regarding VORs. But, there are still a lot of localizer and localizer back course approaches out there, and you may have to fly one. You shouldn’t entirely dismiss VHF navigation just yet.

Look at the Grand Forks LOC BC Runway 17R approach. If you know right away how to set up your navigation, what OBS settings to use and how to read your instruments (HSI or VOR/LOC indicator) on the approach with procedure turn and missed, you can stop here and even skip next month’s clinic.

However, if like most pilots, the setup for these approaches makes you at least think—or worse, look for an alternative—this is for you. (Oh, and you’re not alone in being confused. It’s common. As a newbie, I flew with a seasoned ATP who nearly flew us into a mountain because he misunderstood this stuff.)

Localizers first require an understanding of VORs, old school or not. I’m going to use a series of technologically inaccurate, but conceptually useful examples. Let’s start by thinking of a VOR as a lighthouse whose light sweeps the horizon.

Say the beam from the lighthouse has the direction embedded in it. Thus, a person east of the lighthouse will see “090” in the center of the beam as it sweeps past. Similarly, an observer northwest will see “315.”

That’s it. That’s how a VOR works. The station broadcasts a VHF signal from which the receiver can tell its direction (radial) from the station. The magic happens as the received radial is combined with a selected radial (omni-bearing selector, OBS) to determine a to-from indication (ambiguity indication) and a left-right course correction.

On the other hand, with 270 in the OBS, you’ll get a “To” indication, saying you’re in a position that’s 270 degrees (or, between 180 clockwise to 360 degrees) to the station. One implication of this is that as you turn the OBS, the ambiguity indicator will flip or reverse as you turn the OBS beyond 90 degrees difference between it and the received radial.

Let’s add the course deviation indicator (CDI). The CDI works with the ambiguity indicator, while both are determined by the received radial and the OBS setting. You’re still east of the station with 090 in the OBS and a “From” indication. If you drift southward, the CDI will move to the left. The concept behind this assumes you’re flying away (“From”) from the station, so you’d correct to the left to get back onto the 090 course from the station.

Conversely, if the OBS is 270, with a “To” indication, as you drift south the CDI goes to the right. Again, the concept is that if you are indeed flying toward the station on a course of 270 and drift south you want to correct by turning right.

Above I said that if you simply turn the OBS past 90 degrees difference from the received radial, the ambiguity indicator will flip. Now, say you start with the CDI centered and a “To” indication. Turn the OBS value counterclockwise, reducing the numbers. Test: Which way will the CDI move? As you turn the OBS to that 90-degree difference from the received radial, both the ambiguity indicator and the CDI will reverse. If the CDI was to the right (it was), when you get a switch to a “From” indication, the CDI will flip to the far left.

Another test: Same situation, but the CDI is centered with “From.” As you turn the OBS counterclockwise, which way will the CDI move? If all this makes sense to you, let’s move on to localizers.

A localizer is technologically quite different, but the usage concepts are similar. A localizer transmits a static signal—the lighthouse is stuck—and your navigation receiver knows if it is on that beam or not. Since the beam doesn’t move, the idea of to/from and an OBS becomes irrelevant. Your navigation receiver knows when it’s getting a localizer signal so it ignores the OBS and (depending on model) removes the ambiguity indicator, leaving just the CDI.

Instead of the idea of to and from, a localizer signal has a similar concept of front course and back course. The localizer signal actually radiates directly out from the antenna in opposite directions, as if the lighthouse is actually bipolar, with a front beam and a back beam. When a localizer is installed conventionally, if you’re inbound (to the station) on the front course and you’re left of course, the CDI will move to the right to get you to correct back to the inbound course.

Charts help figure out which way to turn. Note the localizer symbol or “feather” on the chart. One side is shaded, hashed or otherwise differentiated. If you’re over there, in that shaded area, the CDI is to the left. Like a VOR, it doesn’t matter which way you’re actually headed; it only matters where you are. When you’re inbound on the front course, that shaded area will be to your right, so you correct toward the needle. Likewise, you chase the needle when outbound on the back course. But, if you’re inbound on the back course or outbound on the front course, the shaded area will be to your left, meaning you would correct away from the CDI. Got all that?

So, with discreet nav instrumentation, how would you setup and fly this approach? Say you’re inbound from the south to the GFK VOR. You get cleared for the approach, own nav. At GFK, you intercept the localizer back course and fly it outbound. Note, “back course” and “outbound” were in that sentence, so you’ll chase the needle to correct. Plus, the shaded part of the localizer feather is on the right, also telling you to chase the needle. What should be in the OBS? Well, it doesn’t matter since OBS is meaningless to the localizer, but the best habit (preview: as we’ll see next month) is to always put the inbound front course in there, in this case, 354 degrees.

Is that “reverse sensing”? Well, not really because the needle just goes to the left when you’re in the shaded area. It doesn’t know front from back courses, or inbound from outbound. It only knows which side of the localizer feather it’s on. It’s actually just your senses that have to be reversed to correct properly. You can decide if that’s reverse sensing or not.

Of course, this is all true if you’re using a conventional navigation indicator. If you’ve got an HSI, well, you never have to fly away from the needle. We’ll talk about that next time.

Frank Bowlin was about to risk the ire of that seasoned ATP who was headed into a mountain. Just then, though, the controller interjected vectors to save Frank’s butt—and career.