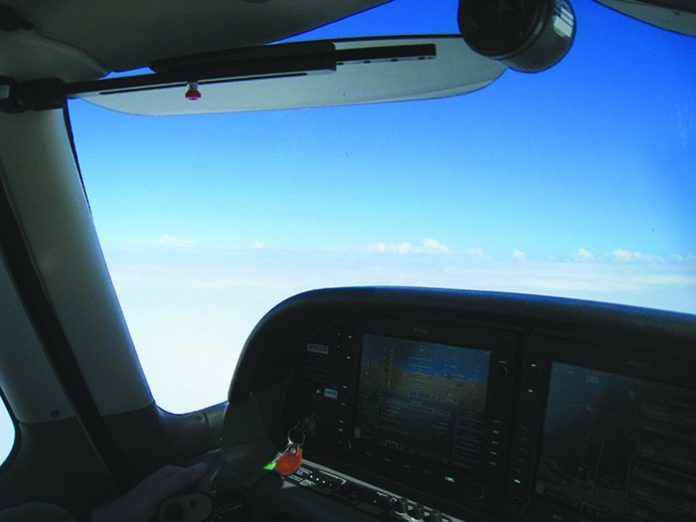 Let’s fire up the Wayback machine and set it for high school physics class. As an aircraft climbs, it burns fuel (and by extension, money) to provide kinetic energy. That energy is used for climb performance and airspeed (countering that demon drag in the process). Once the aircraft is tucked away at a cruise altitude, some of that formerly-kinetic energy is available as potential energy due to the force of gravity acting on the aircraft. Potential energy can be converted back into kinetic energy by initiating a descent, which you can observe as increasing airspeed (all else remaining equal).

OK, that’s over simplified. But the fact remains that there is an opportunity latent in the energy stored by being up high. Here’s some similarly simplified logic: Airplanes speed up during descents; pilots usually like going fast; a faster airplane gets to its destination quicker, which usually saves money; pilots like saving money. Therefore, pilots should descend fast.

Except that many don’t.

“What’s learned first is learned best” is a wonderful tool if used properly by instructors. However, the majority of pilots that I’ve flown with over the years exhibit the same behavior when it comes to descents. These pilots initiate a descent by first reducing power, then pitching down to maintain their cruise speed, further reducing power to keep that speed while descending at a reasonable rate. Sound familiar?

When flying a low-performance aircraft like a Skyhawk or a Cherokee, at relatively low cruise altitudes, it really doesn’t make much difference whether you fly a cruise-power descent or a reduced-power descent—you might hit 120 at cruise power as opposed to 105 at reduced-power. It’s when these same pilots upgrade to higher-performance aircraft with cleaner airframes and higher cruise altitudes, such as a Centurion or Bonanza, and don’t alter their style of flying that it becomes an issue.

The basic premise is that after spending a significant investment of time and fuel (money) climbing up to cruise altitude, you want to plan and execute your descent on the other end of the flight in order to make optimum use of your stored potential energy. You also don’t want to give up too early the higher true airspeed at altitude due to the thinner air or spend longer than necessary down low when clouds or wind make it a bumpy mess near the ground. Don’t worry, it’s not as scary as it sounds and there won’t be a test at the end, just smaller bills to pay.

Planning a descent is not rocket science, it’s just some simple mental math. I prefer to plan for 500 FPM descents because it makes the math easy and it’s easy on unpresurized ears. For instance, if you’re 8000 feet above your target altitude, it will take you 16 minutes to get there at 500 FPM, regardless of your airspeed. What trips up many pilots is determining how far from the target the descent should begin.

I like simple numbers for mental math because they build in wiggle room. Will your descent be roughly 120 knots, such as in a Skyhawk? Plan on two miles per minute over the ground, which means you start down 32 miles before your target (16 min x 2 nm/min). Going a bit faster, such as in a Centurion? Ballpark it at 180 knots and plan on three miles per minute. The same 16 minutes requires starting down 48 miles out. Now pad each of them by a couple miles and you should be good to go. Most modern GPS units have VNAV planning built in, but it usually takes just as long as the mental math to set up.

Staying below the yellow arc on the airspeed indicator makes one less thing to think about when you hit some bumps punching through a cloud layer. During a descent rate in the 500-FPM neighborhood, this is usually not a factor because in a cruise descent like this, I’ve found most clean retracts will pick up about 25-30 knots. You would have to shove the nose over real far to have airspeed limitations become a problem, and by that point any passengers in an unpressurized cabin would probably be strangling you anyway.

I’m in the camp that says cruise power descents also avoid shock cooling the engine(s) and that you make gradual power reductions of one inch of manifold pressure per minute to keep big-bore engines happy. Just look at the difference between your current power setting and the desired power setting at your target and then apply the same 2 nm/min or 3 nm/min rule discussed above. Reduce power not only enough to keep the MP from increasing as you go down (if you’re not turbocharged) but enough to actually decrease the MP every minute. Remember that once you nose down and pick up some speed, it takes a little while for the speed to bleed off when power is reduced and the descent maintained.

No discussion of descents could be complete without bringing up ATC. ATC demands can be the limiting factor when it comes to your descents, regardless of what you had in mind, but only if you let them. Correlating your needs with ATC’s needs usually isn’t that difficult.

For starters, asking for a descent at pilot’s discretion (PD) might be all that’s needed. During a PD descent, ATC gives you the freedom to descend at any rate you choose, and to begin descent whenever you choose. Contrast that with the standard “descend and maintain” verbiage, which expects you to descend “at an optimum rate consistent with the operating characteristics of the aircraft,” but it’s not to be lower than 500 FPM.

Second-best to the PD descent is a crossing restriction, which is stated as “Cross ALDAN at and maintain 7000.” This restriction still gives you a little freedom by allowing you to descend however you choose, so long as you are at 7000 by the time you pass ALDAN. You may need to redo your mental calculations to make it work. Sometimes the controller has his hands full in a busy terminal area and can’t give you much wiggle room. That’s just the nature of the game.

Cruise descents result in an incremental gain. Saving 5 to 10 minutes per flight might seem insignificant and could easily be wiped out by a bad vector in the terminal area. However, shaving off that kind of time on average over the course of just a handful of flights, could easily save a half hour or more. The engine health benefits resulting from this change are indeterminate, but there’s a reason the companies that sell spoilers for high-performance airplanes are still in business and why Part 135 operators that practice good energy management get extended TBOs on their motors.

Both those factors translate directly to your wallet, and that surely makes every pilot happier.