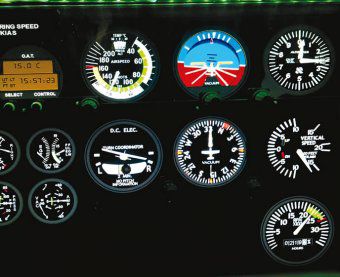 When we started our sim-training business, we thought our strongest selling point would be logging cheaper time, such as the 20 hours of the instrument ticket’s required 40. We were wrong. The sim is a more efficient pilot training environment and shouldn’t be seen as a replacement for the airplane. Time logged is a nice bonus, but the real value is the learning efficiency and effectiveness. Once pilots and CFIs understand this, the training opportunities are vastly expanded.

A goal of training is to take knowledge and procedures that are new and unfamiliar and make them routine. One of the best ways to accomplish that is through repetition, something the sim is superb at efficiently providing.

Teaching in a Redbird AATD for the last couple of years, we’ve learned a lot about how to use it, and how not to. The most important thing we’ve learned is the need to change our mindset to use the simulator as the efficient classroom it is.

First, Do No Harm

Perhaps the most important thing to remember is practice doesn’t make perfect—perfect practice makes perfect. A sim allows you to repeat an identical task until it becomes second-nature, but you must get it right from the start. Michael Jordan said, “You can practice shooting eight hours a day, but if your technique is wrong, then all you become is very good at shooting the wrong way.” The same goes for flying, but with higher stakes.

Because of potential negative learning, most flight instructors are wary of people who claim to have taught themselves on their home computer. If their fundamentals are flawed, there may be a lot of un-teaching to do.

We had a young man recently who claimed to have over 3000 hours flying virtual airliners on Microsoft’s FSX program. When he comes in for his first lesson, will he be ahead or behind the curve? He might have done considerable damage that will have to be undone by his CFI.

Gaining proficiency in an airplane is also inefficient because safety of flight must be the first priority. Every time an instructor takes over, we not only diminish the learning, we may be impeding it. Many students interpret the transfer of flight controls to mean they’ve done something dangerously wrong. This can heighten their anxiety and reduce their learning receptivity. In short, they might become too afraid to learn.

With no danger in the sim, both the CFI and the flight student relax and concentrate more on the lesson than the inherently dangerous environment of an airplane in flight.

We use the sim to teach one skill at a time. When teaching ILS approaches, we start with just intercepting the localizer. We place the pilot a few miles out on an intercept heading. As they turn to intercept, we’ll move them back and do it again—over and over. When they’ve mastered that task, we add variable winds.

The best tool we have in a sim is the pause button, because we can stop at any time and discuss what’s going right (or wrong). We keep working on technique until it becomes second nature.

We do the same thing for each task of that approach. By the end, the student can fly an ILS flawlessly, intercepting and following the localizer and glide slope all the way to DA with ease. We vary the ceiling and visibility for realistic land/miss decisions, something that’s almost impossible in the airplane.

As a result, students learn to incorporate their scan while controlling the airplane, and still have brain cycles left over to make good decisions. Nothing accelerates learning like this repetition. The instructor is able to concentrate solely on the teaching, allowing him to look for and quickly correct bad practices .

Partial panel work is a snap in the sim, and we make sure the student gets lots of practice on every type of approach. In the sim, like in real flight, a vacuum pump failure is an insidious surprise, unlike airplane training where it’s announced by the appearance of instrument covers, rendering the exercise nearly pointless. Nothing has the impact (or instructor viewing enjoyment) of failing the vacuum pump and watching the student work through it. I discovered it will always catch them the first time, but seldom a second.

We frequently pause the sim to discuss the situation. We can then resume, either from that point or the beginning. This way, the student hones right in and quickly learns the lesson, later taking that knowledge to the airplane.

Covering anomalous circumstances in the airplane ranges from dangerous (engine failure) through artificial (failed vacuum pump) to impossible (wake turbulence). Randomly throwing these in the sim program produces a pilot who, if ever confronted with the real thing, will likely react with a bit more comprehension than, “Now what?”

I’ve seen brilliant flashes of imaginative instruction from my CFIs. But, just as often it’s students who suggest something so effective I end up adopting it. By stretching the simulator, you can train outside the box. For example, sometimes our scenery includes aircraft carriers. We developed our own VOR approach to a carrier in San Francisco Bay. Throw in some low ceilings and your pilot gets as precise as possible because there’s little room for speed, altitude or track errors. That was a great idea; I wish it were mine.

Another CFI likes to gradually reduce visibility to see when and how smoothly his student makes the transition to instruments. We also do that to teach good weather decisions to a VFR pilot.

One favorite trick is to add some substantial turbulence or a shift in wind direction just as the student commences a critical task like intercepting final, leveling at MDA or missing. There’s nothing like the unexpected to teach us to handle distractions.

We recently had a CFI come to us to add her instrument instructor. She was an excellent pilot but she’d only flown airplanes with glass-cockpits; she struggled with conventional steam gauges. Addressing this might have taken many uncertain hours in an airplane, but it was an easy fix in the sim. Her instructor positioned her at altitude and just moved her around in pause mode, changing her heading and bearing from a VOR and then had her identify her location. In short order, she was as proficient with the round dials as she was with a G1000.

As they gain experience, flight instructors develop a toolbox of teaching aids. A flight sim, properly used, will expand that toolbox to provide a learning experience far superior to an actual airplane. Just as a good fitness trainer will tailor a program to your weak areas, a simulator can make your training far more efficient in time and money.

Some might argue that a simulator does not perform realistically enough. In my experience, most do. In fact, although we regularly find pilots who can fly an airplane well but struggle in the sim, almost never does a successful simulator student struggle in the airplane. Simulators work.

I hope by now you’re getting a taste of the different, but far superior, learning paradigm that simulators offer. Even experienced pilots who spend a few hours in the sim practicing what they can’t or don’t do in the airplane, end up far better pilots. After all, that’s what we’re all after, isn’t it?

Mike McCurdy, CFII, owns and operates CRAFT, a flight simulation training center in Charleston, SC. He has so much time in the sim, he occasionally reaches for the pause button in his airplane.