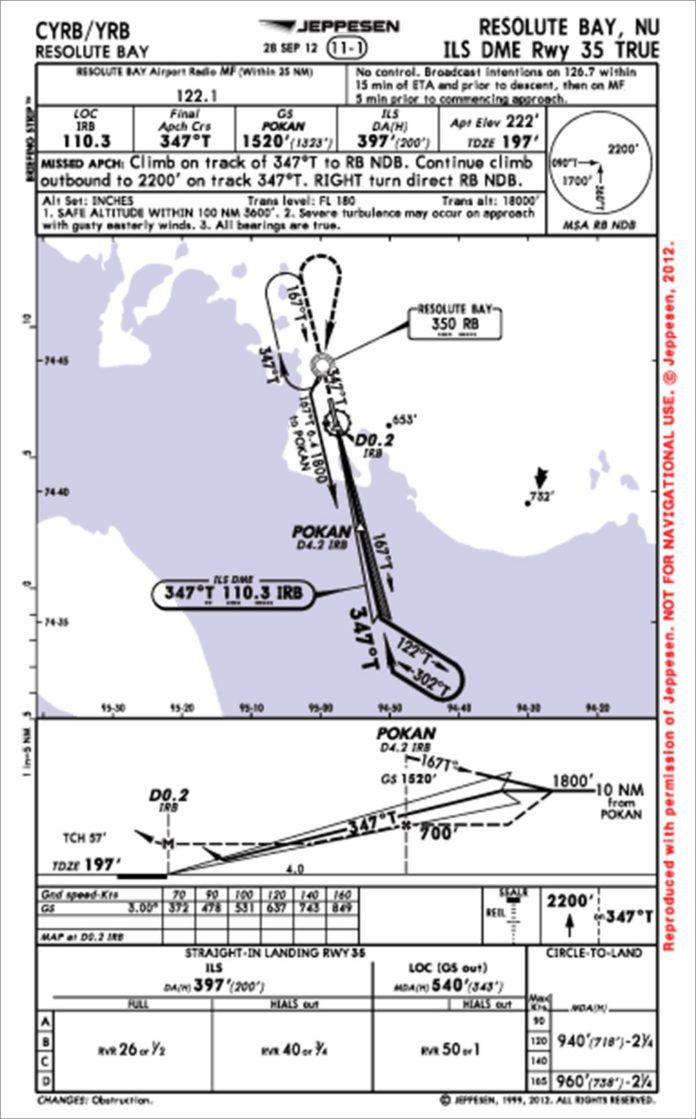 You asked for an iPad 4 last month, but the guy in the red suit brought you a mini. You want to visit him to discuss his error, so you plan a trip to the airport closest to the north (magnetic) pole: Resolute Bay. But, when you open the approach plates, you’re confused.

Compasses align with the horizontal component of the earth’s magnetic field. But near the poles, the vertical component gets in the way, causing errors. Plus magnetic variation changes rapidly. With navigation constructed around magnetic courses, lacking reliable magnetic indication causes interesting navigation problems.

For navigation in the Northern Domestic Airspace (NDA, north of about 60 degrees) NAV CANADA uses all true courses—VORs, runways, wind direction, etc. The ILS/DME RWY 35 approach into Resolute Bay has the suffix “TRUE” on the name to point this out. The FAA uses grid and magnetic courses for approaches north of approximately the Arctic Circle, but all other published FAA courses are still referenced to magnetic north.

The Barrow VOR/DME RWY 25 approach shows grid courses (“040 G”) and a notice, “Grid courses are true polar courses and convergence angle factor shall not be applied.” While we understand true course, what is a grid course?

Grid Navigation 101
Navigating with true courses permits more accurate navigation than magnetic courses at high latitudes. But, at extreme north latitudes, referencing the true North Pole, from which everywhere is south, accuracy diminishes with the rapidly converging meridians and the need to constantly adjust headings.
Grid navigation in high latitudes was developed in Canada after World War II. It overlays a grid of meridians parallel to the Prime Meridian. These do not converge and conceptually flatten the earth, which causes the true North Pole to be a line rather than a point. This system allows a pilot to fly a constant indicated heading along a straight line, with no intermediate heading adjustments.

Your initial course can come from a GPS, a course to or from a true aligned navaid, a true aligned runway before departure, or over a point with known magnetic variation, such as a VOR.

Corrections are similar. Longitude displayed on a GPS can be used to adjust a grid course, as can a direct course to a true aligned navaid, or a shot with an astrocompass if you’re feeling sporty.

After studying polar navigation theory during your flight to Resolute Bay, you see there’s nothing magical about true and grid courses referenced on high latitude approaches. Once the new heading reference system is started, it’s business as usual, as long as you pay attention to position checking and gyro drift.

As luck would have it, once you finally make it to Santa’s shop, all you find is a note saying that the Clauses had gone to their winter home in the British Virgin Islands. Well played, old man.

Lee Smith can think of many places he’d rather fly than the North Pole in the middle of winter.