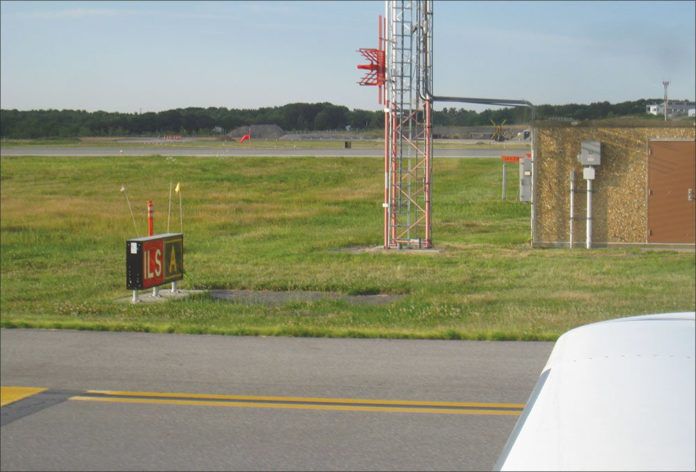 Even though the ILS is still the gold standard for instrument approaches, it has an Achilles heel that catches even the professionals off guard. Don’t let it happen to you.

Our CRJ-200 was sliding down through an overcast layer, following the glideslope to Runway 28 at Chicago O’Hare. Everything was normal, just like it always is. My airline job means I make this approach a couple of times a week.
Suddenly, the glideslope went up and then down. The autopilot followed, pitching the airplane like a roller coaster with wild fluctuations in airspeed. I got on the controls to both shadow and dampen the autopilot’s control inputs. This put me in a position to quickly disengage the autopilot if necessary. Just before we clicked off the autopilot and aborted the approach, the glideslope settled down and behaved.

Because it settled down there was no need to disengage a properly working autopilot, especially during the high-workload environment of an ORD approach. But you can be sure we were ready for further disruptions. Since that day, I’ve seen several more glideslope fluctuations on approaches, although usually not so severe.

The FAA recently released a bulletin advising professional airplane operators of ILS fluctuations. However, the proliferation of advanced autopilots that can lock on to an ILS also makes this a problem for general aviation. Sudden glideslope fluctuation sets you up for loss of control at a point in the approach where there’s not much room for recovery. If you’re not prepared, the day might not end well.

Critical Details
The thing to keep in mind is that localizer and glideslope signals are susceptible to interference by objects on the ground—objects that move. Airplanes and airport vehicles moving on the surface could mess with your ILS if they move between you and the antenna.

Remember that an ILS is composed of a localizer and glideslope antenna. In this sense, it’s really two approach systems: one for your lateral position and another for your vertical. The localizer controls the lateral, and transmits very-high-frequency (VHF) radio waves. The glideslope controls the vertical and transmits ultra-high-frequency (UHF) radio waves. You only tune the VHF frequency because there’s only one UHF frequency paired to each VHF one. Your nav radio actually tunes the paired UHF frequency for you.
The point is that because these are two separate systems, it’s possible to have interference with only one while the other provides perfect information.

Both of these signals travel line-of-sight from the transmission point, but the glideslope antenna is more frequently blocked than the localizer antenna because of its location on the airport. The localizer antenna is normally placed at the departure end of the runway it serves. It’s possible to get localizer interference from an aircraft ahead of you on the same approach, from an aircraft rolling out to the end of the runway while you’re on approach, or from a vehicle crossing a runway near the departure end. But these are not that common.

Check your AIM 1-1-9 (d) to see that “the glideslope transmitter is located between 750 feet and 1250 feet from the approach end of the runway (down the runway) and offset 250 to 650 feet from the runway centerline.” Normally, the glideslope transmitter is located parallel to the touchdown zone aiming points. This location can result in aircraft standing in close proximity to the antenna when waiting for takeoff or to cross the runway.

There Oughtta Be a Law
ILS critical areas are established to mitigate exactly this kind of interference. These critical areas are locations where vehicles on the ground could block the signal from a transmitter to an airplane on approach, and are demarcated by hold lines. The ILS critical area hold lines are two, yellow solid lines spaced two feet apart, connected by pairs of solid lines spaced 10 feet apart extending across the width of the taxiway. You could find them on taxiways or even apron areas, depending on the exact layout of that airport.

ATC only protects the critical area during a very limited window: Vehicles must be instructed to hold short of the critical area only when the ceiling is below 800 or visibility is below 2 miles, and an aircraft is inside the final approach fix (FAF).

Consider that most FAF altitudes are approximately 2000 feet AGL. You could be on a coupled approach with a reported ceiling of 900 feet, and at 1200 feet AGL experience distortions as a Citation Jet taxies up to the hold-short line through an unprotected ILS critical area. It’s entirely possible something like this happened to us at O’Hare.

A pilot can request that ATC protect the ILS critical area (although I wouldn’t try it at O’Hare). This can be done directly, or it’s taken as a request if the pilot advises ATC he’s conducting an autoland or coupled approach. ATC might be unable to grant the request due to traffic or other conditions at the airport. Certain airline operations require periodic coupled approaches. The ability to request that ATC protect the critical area when weather conditions are greater than 800-and-two is to facilitate that requirement. Requesting protection for every approach wouldn’t be appropriate.

ILS critical areas are only protected when a control tower is in operation. If the tower is closed, or it’s an uncontrolled field, there’s no guarantee the critical area will remain clear regardless of the weather conditions.

Don’t just brush off this thought. When the field is uncontrolled for whatever reason, you not only have no way of knowing the ILS system won’t be interfered with at the last minute, you also may not be reachable by a controller with a low-altitude alert—or have someone on the ground respond right away when you end up in approach lights.

It also matters if you’re the airplane on the ground. In fact, this might be more important. If you’re taxiing out at an airport that’s uncontrolled (due to a closed tower or otherwise) and you notice an ILS critical area, pause and think before you taxi past. If conditions are IMC and there’s an aircraft on approach, don’t taxi past until the aircraft has the runway in sight. If you’re not sure whether there’s an aircraft inbound, it might be worth checking with approach (if you can reach them from the ground) to see if someone is coming and might get a wild ride because of your taxi. Technically, you’re not required to worry about this, but think how awful you’d feel if someone else had an upset because you taxied out without thinking through the consequences.

Don’t Get Upset
When you experience a distortion it is critical to maintain control of the airplane. One way of doing this is to turn the autopilot off. The “gain” of a pilot is less than an autopilot, so a pilot can average the distortions to remain on the glidepath.
One method for maintaining glideslope through distortions is knowing the required vertical speed. Both Jeppessen and AirNav charts contain tables indicating the required descent rate for a given groundspeed. By maintaining the required vertical speed, the glideslope can be maintained.

Of course, if the distortions are so severe you think the overall integrity of the glideslope signal is flawed, then you can disregard it entirely. There may be an option to continue the approach localizer-only. Or you may have to fly the missed.

As automation becomes more prevalent and sophisticated, new threats emerge. ILS fluctuations in a low-tech cockpit might have a pilot scratching his head. The same signal wobble on a coupled approach could have the pilot’s head smacking the ceiling. If you’re prepared, however, it should be no more than a bump in the road on your way to a smooth landing.

Jordan Miller keeps the needles centered as best he can as a regional airline captain. He has also been an active GA instructor for 10 years.