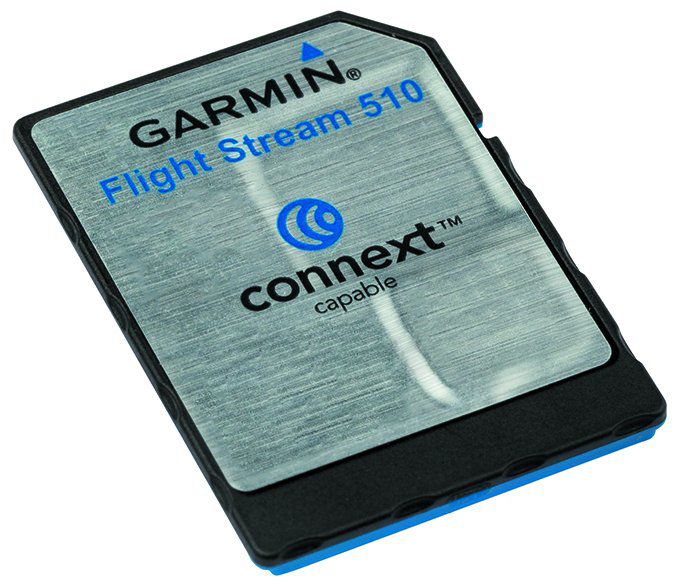 We’ve taken wireless connections granted for years now in our daily lives. But, when our airplanes play, it’s again pretty exciting. We wrote about Garmin’s Flight Stream 110 and 210 in February 2016. Now, the next generation of this device will cut your database costs and effort to boot.

Using a Bluetooth connection provided by the Flight Stream, you can connect your iPad or Android tablet running ForeFlight or Garmin Pilot. (I’m using an iPad with Garmin Pilot.) With some capability variations between Flight Stream models, that connection allows two-way transfer of flight plans and changes between your tablet and panel-mount navigator. It also sends AHRS attitude, heading, speed and altitude data, ADS-B traffic and weather, and Sirius XM weather from the panel-mount equipment to the tablet.

You can also control Sirius XM radio from the tablet and even send text messages or make phone calls through Garmin’s GSR 56 Iridium satellite device.

Before you ask, Connext allows certified data sources to transfer data to your tablet. You can’t take portable, non-certified sources (such as Garmin’s GDL 39) and transfer their data into the panel-mount devices.

The Flight Stream 110 and 210 devices are black boxes that are installed by your avionics shop. The next generation device, the $1500 Flight Stream 510 that I tested, is a patented multi-media card (Think SD memory card with a lot more capability.) that replaces the data card in your GTN navigator. Sorry, there’s no equivalent for GNS users. That small card houses 32 GB of memory, plus Bluetooth and WiFi transceivers. The FS 510 provides all the capability of the FS 210, but with the newly added WiFi connection you can wirelessly transfer all the databases from your tablet to your compatible panel-mount devices.

We pilots have long complained about the cost and difficulty of keeping the data current in our navigators. This goes back to LORAN where we had to actually replace memory chips inside the device. Garmin heard us and responded.

Garmin previously offered a single-subscription “PilotPak” covering multiple devices to offer some savings over subscriptions for individual boxes. Nonetheless, PilotPak data was expensive, running $1122 a year for Americas data with FlightCharts for my GTN 650 and G500. U.S. standard and IFR data for Garmin Pilot adds another $150, bringing the total to $1272.

Garmin’s OnePak enters the field with Garmin-sourced data, allowing deeper savings on that data. Now, a North America subscription with FlightCharts covering the GNS or GTN navigators and Garmin EFIS installed in one aircraft with Garmin Pilot can be had for $924, about $350 less. Smaller, less expensive packages are available.

Once you’ve got a OnePak and a FS 510, you’ve also got something Garmin calls Database Concierge—a fancy name for WiFi database updates using Garmin Pilot and a GTN navigator equipped with that FS 510.

You update data in Garmin Pilot over the Internet at home. At the aircraft, Pilot can use the WiFi connection to the FS 510 to transfer data to the navigator. From there, it can automatically propagate to your other navigator and your EFIS (G1000, G500/600, etc.) Until our aircraft have Internet connections of their own (at affordable data rates) updates aren’t likely to get much easier.

It’s important to note that every device participating in this new database update process requires a new software update. Be sure that everything you expect to connect is ready to play along.

This is my first experience with any Flight Stream device and I’ve only used it long enough to play with it a bit on the ground and a brief flight around my home ‘drome in Santa Fe, NM. Here are my observations.

As is often the case after your navigator or EFIS visits the avionics shop for a software update, the first task is a database update. I arrived at the airplane armed with my iPad already sporting all the latest Garmin Pilot software and data updates. I expected the connection to my tablet and the database update to be simple. It wasn’t. See below.

I’d prepared my flight plan in Pilot on the iPad at home. Previously, I’ve found it somewhat tedious to work all that out once and then have to key it into the GTN 650. While flight plan entry is easier in the GTNs than in the GNS and other navigators, a flight plan of any length is still a bother, particularly considering all the other pre-flight duties. This time, though, all it took was a couple button pushes on the iPad and the GTN flashed a message asking if I wanted the new flight plan.

After all the initial setup, it was no muss, no fuss, no bother—with a few button pushes the databases were updated and my flight plan found its way from the tablet to the panel. Gee, nothing left to do but, you know, actually fly.

There’s nothing new for the in-flight capabilities, but I will point out that the availability of the G500’s AHRS data to the tablet is a comfort. If the display on the G500 takes a break, I’ve got a good backup via my iPad.

Likewise, the iPad is easier to control than the G500, so managing the weather display takes less effort. As a bonus, if you fly with a right seater as I often do, your “copilot” can get the weather while you attend to other flight duties, thus saving you from potential distractions.

Getting the FS 510 to play with its friends and neighbors was about a three-hour challenge. As of two months after product release, there’s no detailed user documentation. So, it took some non-trivial effort with Garmin support. They were also new to the device and a bit unsure, but they did get me up and running. The key for me was to avoid touching to continue on the GTN—just leave it alone—because the WiFi is only on and database transfers only take place on the first static page. If you leave that page, the WiFi turns off and the Bluetooth turns on, ready for your flight.

My next challenge was just the setup of the GTN and the G500. The necessary configuration isn’t difficult, but must be done manually to get the database updates from the GTN to the G500. Perhaps your shop will do it; perhaps not.

Last, was the time required for an update. The WiFi update to the GTN finished in about 10 minutes—not bad; it takes me longer to do a thorough preflight. But the database synch to the G500 took over an hour, primarily for the FlightCharts. Then, the unit required a restart after the update. I can’t see doing that. Instead, I’ll synch the other G500 databases in under 10 minutes, reboot the G500 so they take, then let FlightCharts update while I’m underway. Garmin cleverly allows requested charts to stream to the EFIS from the GTN before the G500 chart update is complete, so I won’t lose any capability.

Overall, I like the FS 510. Once the requisite software updates were available and I got through the setup and learning curve, the result is ease of database updating with lower cost, some significant redundancy, and better information management. That’s a lot to get from a $1500 avionics purchase.

Never lacking for an excuse to go flying, the addition of the Flight Stream 510 has given Frank Bowlin yet another reason to go “play” with his airplane.