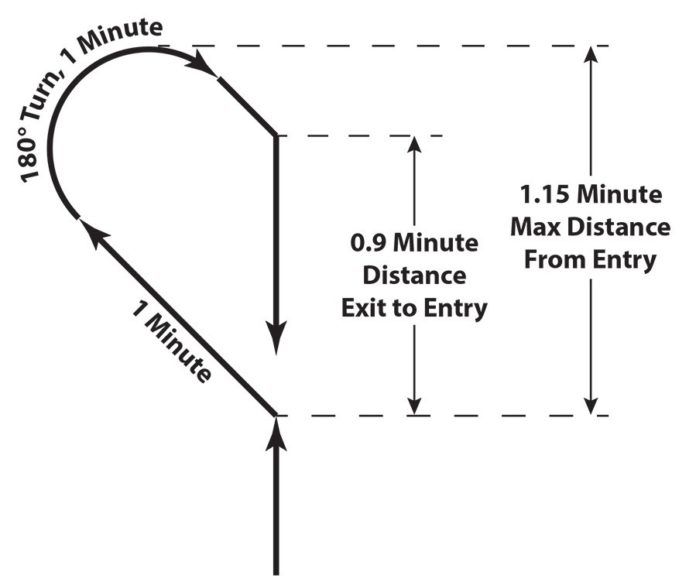 It seems pretty obvious—start the procedure turn (PT) past the “remain within” fix and don’t exceed the specified distance. But, there are other considerations such as having enough time and distance to make the FAF altitude inbound.

Then, there’s the Buchannan Field VOR Runway 19R approach at Concord, CA (KCCR). Here, the chart clearly shows that the procedure turn begins after HUKVI. Or does it?

Despite how seldom we need to fly them, the FAA considers the default procedure to be the full approach with the procedure turn (or hold in lieu of procedure turn). In 91.175 (j) the regs prohibit flying a procedure turn without ATC permission in three cases: receiving radar vectors to the final approach course, a timed approach from a holding fix, and where it is explicitly prohibited by the notation, “No PT” on the chart. Clearly, most of the time we’re on vectors to final. But if none of these prohibitions exist, you’re expected to fly the full procedure.

So, say you’re in the hinterland where Center radar doesn’t go low enough and there’s no approach control. Here, you’ll be required to fly the PT. So, most of us practice them occasionally. It was after flying one such practice session at Concord that reader Phil Blank asked us when he should actually start that turn.

Before we answer Mr. Blank’s question, let’s take a quick review. The Instrument Procedures Handbook (FAA-H-8083-16A) has some good information in Chapter 4 under the section, “Course Reversal.” Here’s a quick summary.

Most approaches require us to remain within 10 nm of the procedure turn fix (also called the “remain-within” fix). Approaches for higher-speed aircraft might extend this to 15 miles and some low-speed and helicopter approaches might limit the distance to five miles.

The purpose of the procedure turn is simply to reverse course, and that facilitates transitions from the enroute environment. You start by going outbound on the desired course and then turn around after getting stabilized and losing some altitude.

The feds don’t usually care how you turn around. Yes, there’s a designated procedure turn using 45- and 180-degree turns. But, they also mention the 80/260 turn, a teardrop and even a hold. All are acceptable, so long as you meet the stay-within distance.

But if the chart depicts an actual procedure—typically a hold—that’s what you should fly. This is where it can get a bit confusing. Unless a specific procedure is required, AeroNav charts just show that barb. The courses shown on the barb are those you’d use in the conventional 45-180 procedure turn, strongly suggesting that’s what’s required. It’s not, as we noted. (Of course—and hopefully this is obvious—you’ve got to make the turn on the depicted maneuvering side. Don’t make a course reversal to the left if it’s shown to the right.)

Jeppesen joins that confusion by showing the full conventional 45-180 procedure turn. Again, when that’s shown, you merely need to get turned around. Do it however you want.

How High? How Low?

Before we discuss when to start that course reversal, let’s discuss altitudes. The profile view shows the outbound course from the PT fix, CCR VOR. The path descends away from the airport with the “Remain within 10 NM” note, and ends with the altitude restriction to remain at or above 2500 feet.

Once inbound, the profile view has a stepdown to 1500 feet at HUKVI and to 1100 feet at the final approach fix (the CCR VOR again). These altitudes are important; they’re called out to provide needed obstacle clearance.

If you’re enroute to CCR and planning to begin the approach from there, you’ll probably be higher than 2500 feet. In this case, the CCR VOR is a bit off the beaten path, only serving one airway. That airway has a 3500-foot MEA from the east, so you could be at least that high as you approach the VOR. Your clearance would probably be something like, “Cross the Concord VOR at or above 3500 feet, cleared for the VOR Runway 19R approach.”

Your briefing prepared you to descend to CCR. At the VOR you turn to the 011-degree outbound course and continue descent to 2500 feet. Your briefing also identified the 1400 feet to lose (2500 feet while outbound to the inbound at the FAF at 1100 feet) on the inbound after the procedure turn.

Ready to Turn Yet?

Reader Blank was confused by the plan-view depiction of the procedure turn, thinking the turn must begin after HUKVI as shown. The actual course reversal, however, need only take place somewhere between the PT fix (CCR) and the remain-within distance of 10 nm. This particular depiction was merely a graphic convenience minimizing clutter. You wouldn’t want the barb on top of the intersection, so they simply placed it a bit further out.

AeroNav’s standard is that the tip of that barb must be at the remain-within distance except when a terminal or feeder fix is along the outbound course as it is here with FAWNE. So, the barb is placed inside that fix. With HUKVI only four miles from the PT fix, the barb would be outside that in any case. Jeppesen’s standards are similar.

The plan view isn’t intended to show where to turn, but that you turn and in what direction. The profile view clearly shows the outbound leg must begin after CCR and complete within 10 miles. That’s it. So, we’re back to when you turn. The best answer, like so much in our flying, is a less-than-definitive “it depends.”

To fly the approach as cleared from the enroute environment, you’ll cross CCR at 3500 feet and turn over to 011 degrees. You might want a mile or so to get stabilized on the new course before launching into a procedure turn.

You’re at 3500 feet over the VOR and descending to 2500 feet outbound after CCR. But, you want to cross the VOR at 1100 feet inbound. So, where do you turn? The answer lies with your approach briefing.

Say you’re flying at 120 knots. (Ignore wind for this example.) Being concerned for passenger comfort, you limit your descent rate to 500 fpm. With more altitude to lose inbound, use that. With 1400 feet to lose at 500 fpm, you want to complete the PT and be inbound almost three minutes from the VOR. At 120 knots, that’s six miles from the VOR.

You should know the distance a standard procedure turn covers at your speed. (If you don’t, use the diagram showing time and convert to distance for your speed.) Here, at 120 knots, you intercept the inbound course at about 1.8 miles from where the PT began. Thus, to intercept inbound at least six miles from the VOR, you’ve got to begin it at or after 4.2 miles when outbound.

But there’s also that pesky remain-within distance. At 120 knots your procedure turn will carve a path that goes 2.3 miles out from where it began. So, in no wind, the PT must begin no later than 7.7 miles from the VOR. Thus, you want to begin the PT between 4.2 and 7.7 miles outbound.

I like to give myself as much time as possible, but I also like to be conservative with limits. So, my rule of thumb is to begin the procedure turn at the minimum distance I want to intercept inbound—in this case six miles. I just have to be careful to check the additional distance covered during the PT (2.3 miles here) to assure I’m within the maximum distance. Beginning at six miles, I’ve got plenty of time to descend and get stabilized both outbound and inbound, with the intercept at about 7.8 miles.

Of course, you’ve got to account for winds in all this.

WWGD? (What Would George Do?)

How would your aircraft fly the PT if fully coupled? According to Garmin, all their navigators from the first GNS 430 onward use essentially the same logic—they’re groundspeed and track aware and start the PT early, but planned to complete at least 2 NM outside the FAF. However, no common GA navigator integrates vertical navigation calculations to plan approach descents. So, you should still make your altitude-based calculations of where to start the PT and make the box wait, if necessary. In fact, you might well want to start the PT long after the box would, requiring you to take a bit more control.

Frank Bowlin is so used to getting vectored to final that he breaks out in a cold sweat when he hears, “Radar service terminated” before “Cleared approach.”