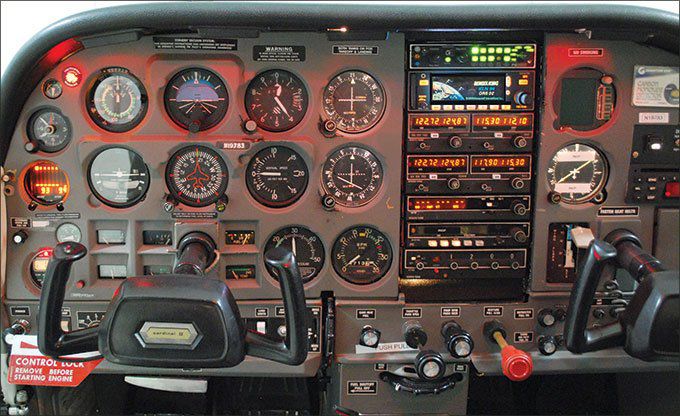 At my day job flying airliners I get a lot of idle time for my brain. To avoid the clich of that becoming the devil’s workshop, I try to occupy myself with deep thought. I’m not often successful, but on a recent rather long leg, I was. I’d just reviewed the sensor data for our single FMS and my mind began to look critically at our on-board equipment compared to what we see in general aviation, specifically the whole concept of “dual” installations of identical equipment.

Don’t be fooled by the supposed technological pinnacle of the average airliner. It’s a myth. A compact aviation GPS handheld today has more capability than we’ve got in the hundreds of thousands of dollars of avionics in the flight deck and down in the avionics bay. In fact, there is still a—fortunately dwindling—number of airliners flying in the U.S. today that don’t even have GPS, but still rely on the good ol’ dual NAV/COMs and DME

The stuff I fly is a bit newer than that, so it does have GPS. But, unlike a lot of well-equipped GA aircraft, we have but one GPS sensor driving one FMS. For those unfamiliar with FMS, you can think of it as similar to the front end of a modern GPS, with the database and routing capability, but it uses multiple sensors (VOR, DME, INS and GPS) to know where it is. Anyway, that’s where my thinking settled: do we really need two?

A Little History
When I learned to fly—a time I keep trying to convince myself really wasn’t that long ago, but avgas was well under a buck—the economical trainer of the time sported a single radio that could be used for both VHF communication and VHF navigation. Pick one. You couldn’t do both at the same time, but had to throw a switch to tell the lone receiver whether to handle voice or navigation.

The serious IFR platform just about required dual VOR receivers. Have you ever tried to identify a fix formed by radials from two VOR stations with but one receiver? It can be done, but there’s a high risk of carpel tunnel syndrome from all the rapid knob twisting. No, you needed two.

And the need for two communications radios remains obvious—what if one breaks? Gotta have a backup. Besides, with two of them you can continue to monitor ATC while you sneak off to get some weather on the other radio.

Yeah, you need two of those, too. Thus, technology advancements eventually allowed the panel of even the modest trainer to contain a matched set of two NAV/COMs, doing both at the same time, without that either/or switch.

You probably also had an ADF and the well-heeled owner might even splurge for a DME as well. With all that, you were wearing the golden crown.

Was it really just over 20 years ago when LORANs became popular, starting to upset the balance of power in aircraft navigation? That’s what started this whole mess, you know.

Before the LORAN, the only area navigation (RNAV) available to GA was the rather quaint rho/theta VOR/DME RNAV. It was great in its time, but a real handful. It had no database, so if you wanted to navigate directly to some point in space, you’d have to define that point in terms of VOR radials and DME distances and keep those VORs and DMEs tuned in.

Through electronic mathematical sorcery (and adequate signal strength), the box could navigate to that point by continuously calculating the aircraft position from the designated VORs and DMEs. Pretty cool stuff when you got it right—but that box may well have been the origin of the expression known to TAA pilots the world over, “What the hell is it doing now?”

Fast forward a couple decades or so and the tiny electronic abacus inside that RNAV wonder-box became sophisticated and cheap enough that the calculations added a database and the LORAN RNAV receiver just about instantly killed the rho/theta version.

But LORAN accuracy was limited and you still had to occasionally select the stations, so satellite became the wunderkind of GA. GPS receivers took LORAN from the darling of GA to “Why bother?” in just a few years. Meanwhile, though, the collective psyche of general aviation pilots was still consumed by the single notion of dual NAV/COMs.

When Garmin introduced the game-changing GNS 430 and 530 in 1998—yes, 15 years ago—we still had that dual mindset, and the GNS 430/530 became right at home in that thinking. Sure, many owners wanting a GPS now made the switch by swapping out an older NAV/COM for a single GNS 430 GPS/NAV/COM, but those who could afford it and wanted a full retrofit naturally installed either dual GNS 430s or a 530 and a 430.

Dubious Benefits
There are some benefits to the dual GNS installation. First, and not to be underestimated, is the “gee whiz” factor of not one, but two fancy color moving map do-it-all GPS/NAV/COMs.

Impressing your neighbors notwithstanding, there are other benefits. Since Garmin allowed the boxes to talk to each other, changes made on one were instantly cross-filled to the other.

This led to some interesting operating modes, where a pilot might keep the flight plan, for instance, on one GNS and a map on the other. I know one pilot who has no HSI so he keeps the HSI display on the 430 and a map on the bigger 530. These modes increased the popularity of the 530/430 installation because the 530’s larger screen could indeed mimic a full-on MFD for those map displays.

Aside from the questionable value of GPS redundancy and the occasional right side flight panel in general aviation, these dual GNS installations are frequently being used as a navigator and an MFD. But, the 530, as good as it was, is no MFD. Its screen is too small and it doesn’t have the full gamut of inputs, although it does better than you’d think.

A better solution at nearly the same or sometimes even lower cost, has been to install a full-fledged MFD and but one GNS, along with either retaining an existing NAV/COM or replacing it with a new one. This increases the overall functionality and provides a bigger screen on which to view the good stuff. The dual screen operating modes are largely retained and in many cases enhanced by the larger screen on the MFD, supplementing the one on the navigator.

The only drawbacks to this approach are the lack of redundancy for the GPS receiver itself and the added space requirements of the separate NAV/COM and MFD. If this article were being written 10 years ago, this is about where it would end. It’s not 10 years ago.

Dual is Better Again
A couple years ago, Garmin brought out the follow-on products to the GNS 430 and 530, the GTN 650 and 750. Their operating logic is similar, but more advanced, and there are two key differences—the GTNs are touch-screen operated and even the smaller 650, but especially the in-your-face display of the 750 does, indeed, have just about all the capabilities and screen resolution of top MFDs.

The advantage over the single navigator with a separate NAV/COM and MFD is still the a smaller overall package while providing GPS redundancy for backup or dual flight panels, but the disadvantages of restricted MFD capabilities are all but eliminated.

This installation has some distinct advantages. In essence, you’ve got two MFDs in the GTNs and you can use them independently. But there is still no new functionality over one GTN, an MFD and a separate NAV/COM, although the price and panel real estate advantages clearly go to the dual GTNs.
It’s interesting how our single-minded focus on dual NAV/COMs drove excessive installations with little real benefit just ten years ago, but now bring us full circle to make the dual concept a useful and practical installation. It’s good to have two.

As it’s turning out though, an increasingly common installation today starts on the flight panel for an EFIS with an MFD. So now we should revisit the whole idea of whether we need dual radios. With that MFD in the EFIS is there an advantage to a second MFD/GPS/NAV/COM over just a NAV/COM that makes it worth the expense?

I’m not seeing an operational advantage beyond the dubious benefit of a second GPS, but this may be mostly personal choice. For my money though, an EFIS MFD in front of me with a radio stack of one MFD/GPS/NAV/COM and a separate NAV/COM is all the functionality and gee whiz I need.
Frank Bowlin‘s first IFR airplane just had dual NAV/COMs. He’s been upgrading ever since and wishes he could start over to do it right, once.