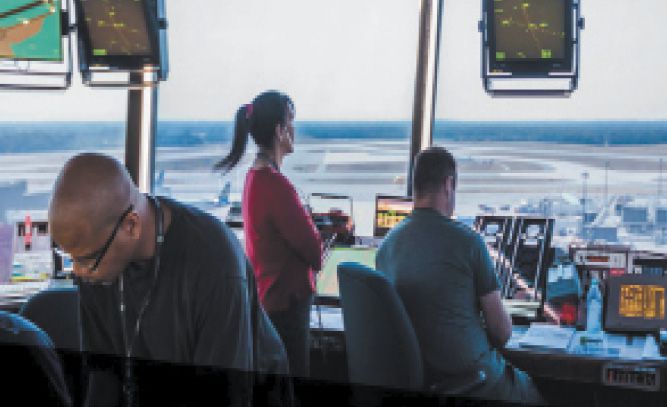 Pilots have a general sense of who is on the other end of the radio, but controllers have a different internal name for the position they are working. While hearing but one or occasionally two voices on frequency, who else is standing there and watching what’s going on? There is more than one voice behind the voice. Since I work a Class D Tower, we’ll mainly stay focused on that.

Depending on the airport, there can be as few as one position in the tower (with every other position combined) or as many as 10. It depends on traffic volume and type (airlines, GA, military). The basic positions are Local, Ground, Flight Data, Clearance Delivery, Assist, Coordinator, and Controller in Charge (CIC). All positions in the tower have a similar responsibility but don’t always overlap with the others. Of course, our goal is to keep traffic moving as smoothly as possible; delays pilots experience are rarely a controller’s direct fault.

We’ll start with the main control position needed in the Tower, which is called Local. When pilots call Tower they are talking to the Local controller. Local is responsible for working the immediate airspace around the airport to ensure separation, initiate control instructions, monitor and operate equipment, continuously scan the surface-area environment, and help out wherever else needed. Local controls who enters and departs the airspace and clears traffic to use active runways for takeoff, landing and pattern work.

While the core responsibilities stay the same at every airport in the U.S., airport requirements and conditions add on other responsibilities that are tailored to each airport. For example, at Class Bravo airports, most of the sequencing and separation is done for Local by the arrival controller, so Local’s main focus is utilizing the runways and departing aircraft with good spacing. They rarely have to worry about the airspace except for a VFR here and there. In some places, it’s literally, “Cleared for takeoff, cleared to land, line up and wait, cross, cleared for takeoff…” The workload is definitely there, but the responsibility is quite different from a Class D Local controller’s.

Class D towers generally will have the IFR sequencing done for them by Approach Control, but Local has to mix those in with all the non-sequenced VFR arrivals and departures. At the Class B, Local is the “easier” position, but at a Class D, Local is where things get busy, often quite quickly. Fly out of a Class D with two or three runways? Then it could really get interesting. Again, they have to sequence all the VFR arrivals and if needed, adjust some speeds of the IFR arrivals to make things work.

On my busiest day I can remember, I had 15 arrivals with a line waiting to depart and five in the pattern on another runway. That definitely kept me hopping. You might think, “15 airplanes? No way. He’s exaggerating.” No, I’m not exaggerating. I remember it vividly because it’s the closest to breaking I’ve ever been. This particular day, we were a bit short staffed in the tower, so Local was busy. On normal days, staffing levels would permit Local to call for help to reduce overall workload on one position.

If needed, some towers have a “Local 2” position. This position has the same responsibilities as a normal Local controller; however, their area of control is just a piece of the bigger picture cut down. In the case of having two runways, Local 2 (when open) controls the smaller runway that is generally used for pattern work. Splitting positions off can tremendously reduce workload on a single Local controller. “But why not just open an assist?” We’ll get to that.

Sitting relatively close to the Local controller is Ground. Most of you can guess what Ground does, yet their responsibilities are very similar to Local as mentioned above. The main difference is—yep, you guessed it—they control the “movement area” on the ground (except runways). If you have any confusion on movement/non-movement area, see “On Your Marks” in the July issue. Ground is a control position but does not issue anything related to airborne communications, meaning if the normal Local frequency is out, you still can’t use ground. Simply, Ground issues normal taxi instructions to and from parking while avoiding any “head on” scenarios. Ground will also ask Local for permission if needed to cross a runway or utilize any area that is under Local’s jurisdiction. As the number of taxiways on a field grows, the responsibility does with it. Depending on the type of airport, Ground can have a fraction of space to work with compared to Local.

The complexity of responsibilities of Ground is also based on the type of airport. At a Class D airport, Local is generally the more complex position. It’s made that way by a mix of roughly 80/20 VFR aircraft to IFR aircraft. So, most of the traffic doesn’t have a set “route” until they check in and Local assigns it, (i.e., “Report a four-mile final, Runway 18”).

Since Ground mainly issues taxi instructions and governs vehicle movement in the movement area, it’s pretty simple at the smaller Class D airports. If we shift gears to a Class B airport, it’s flipped. Ground is the more complex position and Local is relatively easy. Why? As some of you may know, Bravo airports have a lot of taxiways and a lot of airlines all trying to go to the same places at the same time. I’ve seen it happen, there will be nothing and then 10 airplanes in a minute. It literally puts the phrase, “that escalated quickly” to shame with how quickly things can get complex.

Two of the “non-control” positions we’ll discuss now are Flight Data (“Data”) and Clearance Delivery (“Clearance”). In many towers, these positions are combined as one. These positions are responsible to operate interphones, process all flight data information, observe and report weather (make the ATIS), issue clearances to aircraft, and ensure correct readback, etc. That includes VFR flight following requests and IFR clearances, re-routes, and the data those entail.

Every facility has their own way of staffing these positions. Once you have a general idea of routes, points, and how to make the ATIS correctly, it can be a cake walk from there. At the towers where I have worked, one had Data all by itself, another had every position combined, another had clearance combined with Data and also combined with Ground.

Since Local and Ground have a lot more responsibility as control positions, they are more difficult positions on which to obtain a rating. From a training perspective, Data and Clearance are normally used to start a brand-new person in ATC because they are slower positions with significantly less responsibility. Assist and Coordinator (below) are slightly more complex but are not trained until after Ground and Local. If you were able to get Local at a Class D or Ground at a B, Data and Clearance are easy.

Next up are the non-control positions of Tower Associate and Tower Cab Coordinator. The Tower Associate is also called an Assist. Their job is to assist Local or Ground in their activities by ensuring separation, operating the equipment, maintaining awareness, assisting with handoffs/point outs, managing flight plan information, etc. Basically, they hover around and make sure things look right, and say something if they don’t.

The Tower Cab Coordinator is generally known as just Coordinator. Their responsibilities are similar to Assist, but are more related to the big picture instead of focusing on a specific task. These positions are essentially another pair of eyes to watch and make sure things stay safe and are normally combined at Local or Ground. In the Tower where I work, we don’t have an Assist outlined in the SOP, but we do have Coordinator. Almost all of the time, Coordinator is combined with Local. 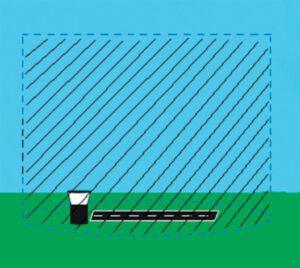 Now you see a good portion of the positions that are or can be utilized in a tower, but who is in charge? The Controller in Charge (CIC) is the PIC equivalent in the ATC environment. It is a non-control position but heavily influences the actions of Ground or Local in the interest of the even bigger picture. 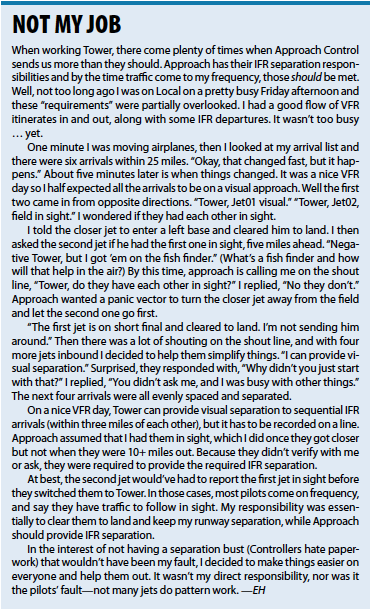 The CIC is responsible for the whole operation. They must listen to as much going on as they can. In the Tower, they would generally listen to the most busy/complex position. The CIC (if they are paying attention) is the one who sees something that neither Local or Ground see and lets them know. If combined with a slower position like Ground, CIC is still responsible for the operation, but a careful eye out for Local. In some TRACON/ARTCCs, the IFR room might be divided into many different sections each with a CIC so one single person doesn’t have to worry about 1000 square miles of airspace. If anything happens as a direct result of a controller’s action or inaction, the CIC would bear most of the responsibility.

Now you could be thinking, “What’s combining?” Combining is exactly what it says. Two separate positions are worked by one person, which means a single person inherits those position’s responsibilities. Depending on time of day, all positions can be combined and worked by just one person.

Doing so can limit the rules applying to that single controller and even limit flexibility, thus it is generally only done during night hours or slow times. On Christmas day, the only people out flying are a select few air taxis and pilots who got a new toy, so one person should manage just fine. However, during normal working hours and busy ops, positions are decombined to handle the more typical workload.

Most of the time at my tower, Data and Clearance are combined with Ground, which is combined with CIC. Coordinator and Local 2 are usually combined with Local. We can go from one position of responsibility to potentially six if needed. Imagine being told you have a list of chores to do, then it becomes easier because you suddenly have others who can help.

Sometimes the controller you’re talking to is not always sitting next to or has the same priorities as the previous or following controller. Their responsibilities start well before you even come onto that frequency and continue until you’re switched. Even the weather could determine which way the complexity of responsibility actually flows. For a VFR Tower controller, there isn’t much to do on an IFR day except collect some PIREPs. For the Approach controller, “Pushing Tin” becomes reality. 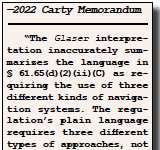 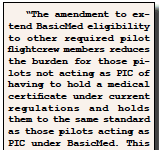 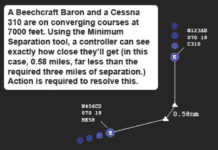