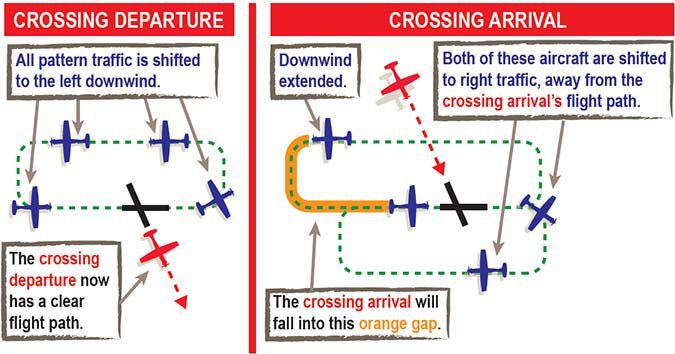 Working as an air traffic controller has been likened to being a symphony conductor. Sure, it’s perhaps a cheesy, overblown analogy, but there’s some truth to it.

An orchestra has many elements: the strings, the brass, the woodwinds, and the percussion. All players, from the violinists to the French horn players, are responsible for intimately knowing their instrument, just as pilots know their individual aircraft. However, it’s the conductor who ensures they all fall in sync with one another.

In music, timing is everything; and so it is in ATC. Many pilots are unsure of when—and with whom—to make special requests and check in with required information. No one wants the orchestra off-beat. Knowing when to request and report certain things keeps the sweet music flowing.

This probably isn’t a shocker, but air traffic controllers don’t really like surprises. A last-minute request for a runway other than the active counts as a surprise—an unpleasant one at that.

There are multiple reasons you might request a different runway for takeoff. A hot day compounded by a heavy takeoff weight, a large crosswind component in a taildragger, and a medevac with a critical patient all qualify. Maybe the inactive runway is just a shorter taxi. Whatever the situation, you’re asking for something special, so give us a fighting chance to work it out.

If the airport requires a call to Clearance Delivery for an IFR clearance or VFR departure, you needn’t wait until you call Ground for taxi. Just tell CD. After the controller verifies your clearance readback, tell her, “I’ll be requesting Runway 9.” You’ve now informed a member of the tower team. They can let you know about any possible issues regarding that runway. Also, when you call for taxi, Ground should be aware of your needs.

Controllers thrive on situational awareness and pre-planning. If you made that runway request while I worked Clearance, I’d write “REQ RWY 09” on the flight progress strip. Then, the request is obvious when you call for taxi. If Ground spots you firing up on the ramp or doing a runup, she might start looking ahead at possible taxi routes and coordinating with Tower or Approach.

When you call for taxi, restate that runway request. “Ground, N3AB’s ready to taxi with information Zulu. Requesting Runway 9.” Controllers are human, and we get a lot on our plate. A memory jogger like that helps a ton in case Clearance didn’t pass your request yet or we didn’t think about it yet. If Ground is the first controller you contact—like at smaller airports—your request could catch them off guard and require extra time to work out.

Ground will inform Tower. While you’re trucking out to the runway, they may be adapting their traffic flow already. Since we may be tweaking a lot of things to accommodate you, be ready to go upon reaching your requested runway, or tell us how much time you’ll need: “Ground, N3AB’s ready to taxi with information Zulu. Requesting Runway 9 and I’ll need about five minutes in the runup. I’ll advise when ready.” This lets Tower keep the traffic flowing until you’re ready.

As with departures, if you’re an arrival in need of a specific approach to a specific runway, let Approach know as soon as you can. When you’re checking in with the ATIS—something we’ll cover momentarily—just go ahead and state your needs. “N3AB, 8000, with Zulu. Requesting RNAV Runway 24.”

Again, you could want that different piece of concrete for a number of needs, like meeting currency, training, or simple expediency. The other day, one airline’s flights all requested the inactive. By the third one, I was curious as to why and asked. The PAPIs on our active were NOTAMed out of service, while the inactive’s were fine. Given the option, their company greatly preferred runways with working vertical approach guidance. Extra safety’s a good thing.

Let’s talk spacing. Does the runway you want cross the active? Approach and Tower have to ensure that when you land, you verify you’re turning off onto a taxiway prior to the active runway, or roll through the intersection of both runways before another arrival crosses the active’s threshold. When the weather is IMC and Tower can’t see you out the window, the rules get even more stringent. Landing traffic on the active runway has to be at least three miles from the threshold.

If Tower’s got touch-and-go pattern traffic, they’ve got to be maneuvered out of the way to make room for your approach. There have been days when I’ve had to extend, 360, and vector the stuffing out of six pattern aircraft to make room for one crossing arrival. It’s not a complaint, just a fact that some requests can require effort and time.

Setting up these kinds of crossing operations takes timing and planning. Let ATC know your request within a reasonable amount of time. Sometimes you get your desired runway right away. Other times, you may have to sit on the ground or get vectored in the air a bit until we coordinate everything.

Good timing also comes into play when reporting information, even as ubiquitous as the ATIS. Sure, there’s nothing quite as dry as an ATIS broadcast. But per AIM 4-1-13, using the ATIS to acquire preflight or prearrival information is a commonsense practice. It also ties in with ATC’s requirements, as laid out in FAA Order 7110.65 2-9-2 (d): “Controllers must ensure that pilots receive the most current pertinent information. Ask the pilot to confirm receipt of the current ATIS information if the pilot does not initially state the appropriate ATIS code.” In two words—”…with Sierra.”—you’ve checked a big box for ATC.

At what point, though, do you tell ATC you have it? Well, as you’ll hear on many an ATIS broadcast, “Advise on initial contact you have ATIS information…” You’re not going to tell a guy 500 miles from your destination that you’ve got the ATIS for an airport he’s never heard of. So then, initial contact with whom?

Departing? That’s easy. Tell the first controller—whether Clearance Delivery or Ground—that you’ve got the ATIS. Many towers have standard operating procedures that reinforce the 2-9-2 (d) requirement. At our tower, Clearance must verify pilots have the ATIS and write its letter on the aircraft’s departure strip. If the ATIS changes between then and when the aircraft taxies, Ground or Tower will verify the pilot has the current info and update the strip.

This isn’t just looking out for our customers. There’s a self-preservation aspect as well. If something tragic happens to that airplane, investigators will pull all recordings related to that flight. If we didn’t ensure the pilot had good info, we’re going to catch flak for it. By the time the aircraft reaches the runway—and ideally before it starts moving—somebody inside the tower cab needs to have confirmed the pilot has the latest ATIS.

How does that change on arrival? This can be more difficult to pin down. A typical cross-country flight might see you transitioning multiple radar facilities: standalone terminal radar approach controls (TRACONs), bigger consolidated TRACONs (CTs), and centers. When do you report having the ATIS?

Take a look at the A/FD listing for your destination. Under “Communications”, check for “APP/DEP” contact info. The timing is easy if it’s a smaller approach control. You can tell because they’re typically named for the primary airport/city beneath their purview, like Omaha Approach or New Orleans Approach.

The first time you’re switched to that particular facility, tell the first approach controller there that you’ve got the ATIS (or ASOS). You can assume each of that TRACON’s subsequent controllers knows you have the info, since it’s now “in-house” knowledge. You probably won’t need to restate that ATIS code, unless ATC asks for it.

Perhaps, instead, your destination lies under a center or consolidated TRACON’s jurisdiction. Both types of facilities work vast regions of airspace. Southern California TRACON (SCT) covers 9000 square miles from Burbank to Mexico. Many airports lie in the center-controlled lands between approach facilities as well. It’s not exactly easy to tell where the boundaries lie. Los Angeles Center alone controls portions of four different large states.

The “first controller” tactic won’t necessarily work here. If you traverse a center or consolidated TRACON’s entire length, the first of that facility’s controllers you contact may be working airspace hundreds of miles away from your destination. Instead, use distance or time. Once you’re within 40-50 miles or 15-20 minutes or so of your destination (whichever’s sooner) I’d recommend grabbing that ATIS and checking in with it on each frequency change. When someone tells you what approach/runway to expect, you know you can stop.

What if the ATIS changes after you’ve reported it? Here goes 7110.65 2-9-2 (d) again: “Controllers must ensure that changes to pertinent operational information is [sic] provided after the initial confirmation of ATIS information is established.” You’ve likely heard blanket ATIS update broadcasts before, such as, “Attention all aircraft, (Airport name) ATIS information Alpha is current. Altimeter 29.89.” ATC may ask you to report the new ATIS, or just tell you the changes. “N3AB, ATIS Alpha’s now current. Runway 28 is now the active. Wind 230 at 15. Altimeter 29.87.”

What if you forgot or weren’t able to pick up the current ATIS? Again, there’s guidance in 2-9-2 (d). “Issue the current weather, runway in use, approach information, and pertinent NOTAMs to pilots who are unable to receive the ATIS.” Of course, that takes time on frequency. A busy controller may rattle through it. If you’re unsure about anything, don’t be afraid to whip out the ol’ “Say again?”

Jamming with the air-traffic orchestra gets a lot easier when you know when to hit the right notes. Even if you’re off a bit, ATC can try to make it work, given some patience on both sides.

Tarrance Kramer is bummed he’s not allowed to play some of his tunes in the background while working traffic in the Midwest.