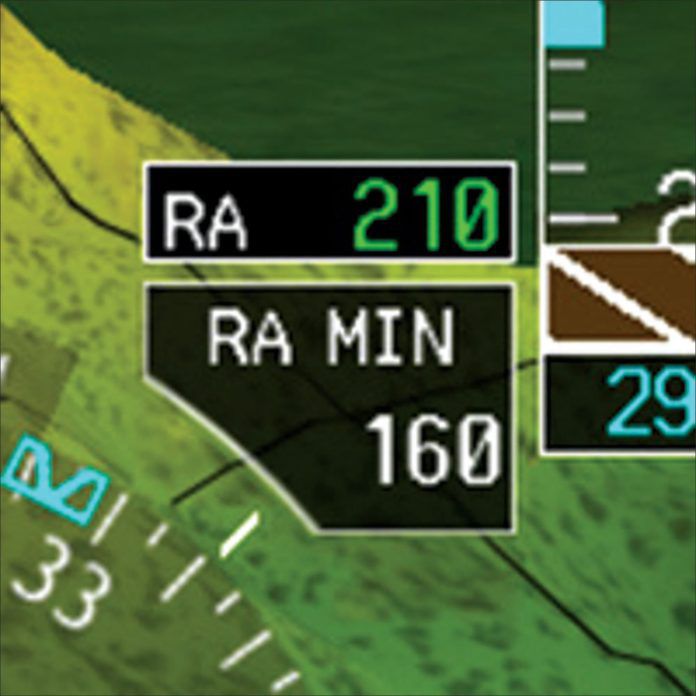 When I first started flying, the concept of altitude was confusing. For pilots the reference, of course, is this thing called mean sea level. But all I was interested in at first was my height above the ground—a measurement with some substance that made sense to me.

But as my training progressed, I saw the folly of my nave thinking, and the importance of using that common reference became obvious. Yet, as my experience continued building and I flew more sophisticated and capable aircraft, I eventually flew one with a radar altimeter. As I got comfortable and began really using that simple device, knowing my altitude with reference to the ground below became, once again, rather useful and—yes—that little bit of technology even simplified a few things.

What Is It?
Let’s start with a review. You should know this part, so I’ll try not to bore you.

The altimeters we use in our aircraft, regardless of whether they’re a simple mechanical instrument with bellows, gears, shafts and such, or the product of mysterious electronic bits and pixels, all measure the same thing: atmospheric pressure. That’s it. They don’t measure distance in any dimension. They simply measure the pressure of the air through which we fly. Fortunately for us, though, there is a direct correlation between the pressure of that air through which we fly and our altitude within it.

As we climb, the pressure falls at a reasonably predictable rate. Thus, that old mechanical altimeter that just measures pressure is simply calibrated to read, not pounds per square inch or pascals or other pressure, but our altitude. There you have the simple pressure altimeter that has governed flight for a century.

A radar altimeter (often called a radio altimeter, rad alt or simply RA), though, works differently. It doesn’t measure pressure, but it still doesn’t directly measure distance, either. No, this one measures time. Again, fortunately for us, there is a direct correlation between time and distance if you know the speed.

Radar altimeters work by measuring the time it takes for a transmitted signal to be reflected from the surface back to the aircraft. That time measurement, like the pressure from our pressure altimeter, is calibrated not in nanoseconds, but in feet. Since radio waves travel at a predictable speed, the time for the reflected pulse to return to the antenna can be calibrated to read the distance the antenna is above the object that reflected the pulse.
While other common uses of radar—air-traffic surveillance and weather mapping—have significant range, the typical radar altimeter has limited range, usually 2500 feet. It’s only useful close to the ground.

“So,” you may be wondering, “after years of flying solely with a pressure altimeter what possible use is a radar altimeter telling me feet above the ground?” That’s a good question and I have three answers for you.

Watch Out
Transport category ground proximity warning systems, GPWS (pronounced, “jipwiz”) use radar altimetry to supplement and fine tune their data-based predictions of when an airplane might be getting alarmingly close to the ground. GPWS, however, is well beyond the scope of a typical general aviation aircraft.

A well-equipped GA aircraft will have an informal terrain awareness and warning system, perhaps in the form of a map that turns yellow and red as you get close to or below nearby terrain, respectively. This could be a certified system called TAWS or it could be as simple as a portable device that provides similar awareness. Without spending the big bucks for a full-up certified system of either type, even the pretty colors on a portable device provide a close and comparatively affordable alternative. Radar altimeter data, however, is not an additional sensor input to those systems, even if present.
But, there’s no reason your own observations can’t include RA data for a fuller picture of the terrain below. Imagine yourself in the following situation.

It’s night. You’re flying the only approach into an airport located inconveniently in a mountain valley. The wind, of course, is blowing the wrong way so you must circle to land. (You may question the wisdom of this situation, but go with me here—it’s a good example.) You note that not only are there mountains all around, but the terrain in the valley near the airport has some rather prominent hills. You’re extra vigilant about circling.

Realizing that not all the obstacles could be depicted and that you couldn’t remember ‘em all anyway, you stay at the relative protection of the circling altitude as long as possible. But at some point, you must descend to land. Plus, you’ve recently adopted a requirement to be stabilized by at least 500 feet AGL, so this requires something more than a chop-n-drop descent near the end of the runway.

Keep your radar altimeter in your scan as you circle and begin your descent. Yes, you’ve got the initial protection of the charted altitude, but the confidence from absolutely knowing your height above the ground is reassuring. Plus, as you begin your descent from that charted altitude, well, that ground-clearance information becomes not just reassuring, but a significant factor in your safety.

You simply set the AGL minimums (MDH or DH) in the radar altimeter and it alerts you at that altitude. But since the altitude, not the height, is controlling, you might again ask what good the radar altimeter is.
Enhanced situational awareness and improved decision making is the answer. Regardless of whether you can bug your altimeter, you bug the minimum height on the rad alt.

Now, as you descend toward minimums, if you’re like me, you’re doing the math over and over again in your head to make sure you’re keeping track of minimums. My personal procedure involves silently articulating 500, 400, 300, 200 and 100 to minimums. With a radar altimeter, I still do that and I do it from the pressure altimeter. However, I’m also keeping an eye on the radar altimeter to make sure it’s in agreement.

Minimums are typically expressed in nice round numbers, like 400 feet AGL. So, while the ground might be at 1362 feet MSL, the MDA is at 1762. My recitation of distance to go would begin at 2262 feet on the pressure altimeter.

But, as I said, I’m also watching the radar altimeter. When flying over reasonably flat terrain, my chant should start at an RA of 900 and count down to minimums at 400. Of course, the terrain is seldom that flat, so there will usually be some disagreement, but you’ll be surprised how closely your RA and pressure altimeter agree at most airports.

Procedures
We’ve stressed the importance of a stabilized approach, even in visual conditions. In May’s “Airline-Crash Trifecta,” Jordan Miller even recommends making a call out to check that you are stabilized. This is a good idea and helps keep the need for a stabilized approach in our minds.

On an instrument approach, you can just incorporate the stabilized check into your present call outs or countdown to minimums. But, if you’re on a visual approach you don’t usually have anything to prompt you for the stabilized check. One way to do that is to set the radar altimeter to 500 feet, for example. As you descend to 500 feet above the ground, the rad alt will sound its alert and you can use that as a reminder that if you’re not properly stabilized, it’s probably time to go around and try again.

Similarly, for most complex aircraft, there’s an after take-off check that involves things like reducing take-off power, turning off fuel pumps and lights and other housekeeping chores. A busy departure can make us forget those items, often for many thousands of feet. So, setting the radar altimeter at 1000 feet, for example, will provide an alert to remind you to perform those tasks.

Do you need a radar altimeter? No, you certainly don’t need one, just like you don’t need that fancy EFIS or even a portable moving map. But, would your precision and situational awareness—and ultimately your safety—increase if you used one? Absolutely. And that’s what all those gadgets on the panel and in your lap are about, right?

Garmin’s New Radar Altimeter
The engineers at Garmin have been busy. In addition to their market sweet spot of GPS navigators and EFIS packages, they’ve gradually expanded their product portfolio to provide just about anything the well-heeled pilot might want. One of the latest products they’ve added to their catalog is a moderately affordable radar altimeter (MSRP $6995).

The GRA 55 is a remote-mount device. By itself, it’ll display on your G1000, G500 or G600. They’re also making a dedicated GI 205 display. The GRA 55 has essentially the same guts as Garmin’s high-end GRA 5500 that’s robust enough for transport-category aircraft, but skipping the extra certification and extreme environmental capabilities brings in the GRA 55 at a lower price.

Garmin’s Bill Stone, Senior Business Development Manager, had quite a bit to say about their entry into radar altimetry. First, he acknowledged that their target market is helicopters where the last few feet before landing are often quite critical and where a radar altimeter can be a life saver. Beyond that, however, he explained that radar altimeters could benefit from a fresh application of the latest technology to provide significant benefits to fixed-wing GA.

Mr. Stone went on to explain that their radar altimeters employ a modern digital design and make use of extensive digital signal processing to provide accurate readings that reject most false data from variable and uncertain surfaces like blowing snow, soft vegetation, choppy water, etc. They not only incorporate a pilot-settable alert point, but up to three fixed alert points can also be programmed during installation. So, in addition to setting the DH or MDH, you might have it installed to alert you at 1000 feet to use on departure, at 500 feet for a stabilized check on landing and even, say, at 10 feet as a just-in-case reminder, “Flare, dude!”

It’s doubtful that radar altimeters will ever be common in piston singles, even those with G1000s, but it’s obvious that Garmin is serious about this market and we believe that pilots definitely benefit from knowing their height above the ground. As Stone pointed out, those who fly with radar altimeters typically find them indispensable. That’s been my experience. —FB

Frank Bowlin often flies with a radar altimeter and finds that they help him cut back on his bone-headed mistakes.