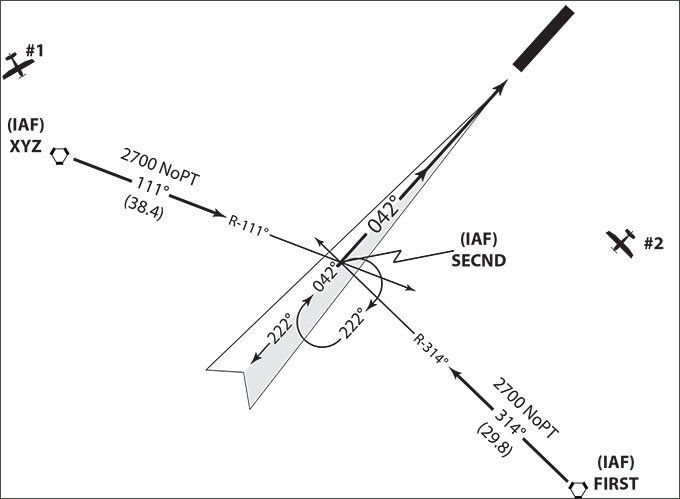 Controller guidance for getting an aircraft onto an approach was a hot topic at a recent Air Traffic Procedures Advisory Committee meeting of various organizations of pilots and airlines.

Previously, there were two basic ways to join an approach, 1) Fly the full procedure starting from a charted route, feeder route, or Initial Approach Fix (IAF); or, 2) Get vectored to the final approach course.

With the direct capability of RNAV systems, two additional options become possible: 3) Fly direct to an Intermediate Fix (IF) on a GPS or RNAV approach and 4) If a Terminal Arrival Area (TAA) is charted, use the entire TAA as if it were a depicted portion of the RNAV approach.

Scheduled beginning June 3, 2013, controllers have a fifth method of joining the approach where an RNAV equipped aircraft can be cleared direct to a step down fix between an intermediate fix (IF) and the final approach fix (FAF) on all approaches (not just RNAV approaches).

The FAA is expanding the options that controllers may use with RNAV equipped aircraft to join the approach. The changes are thus far all in FAA Order 7110.65, the controller’s reference, where a few more goodies are lurking. It may take a while for guidance to make it into pilot publication such as the Aeronautical Information Manual.

This is consistent with AIM guidelines, so it shouldn’t be confusing to pilots.
There are four exceptions to a mandatory procedure turn:

If none of these exceptions apply, a procedure turn is mandatory, regardless of whether it seems necessary. Conversely, if one of the exceptions does apply, it is assumed the pilot will not fly the PT and must obtain a clearance before doing so. As always, confusion is covered by part of 91.123(a), “When a pilot is uncertain of an ATC clearance, that pilot shall immediately request clarification from ATC.”

To further reduce the possibility of confusion, controllers may no longer clear an aircraft direct to the FAF unless it is also an IAF, in which case the aircraft is expected to fly the PT. The logical exception is for a visual approach.

ILS or LOC
In the US, we’ve been able to fly an approach named “ILS” without the glideslope if the chart provided localizer minima. Now, however, many charts are being renamed with “LOC” in the title to remove ambiguity. For these you’ll be explicitly cleared for the localizer approach. Where the procedure isn’t or hasn’t yet been renamed, the controller may still clear you for the localizer portion, but with the new phraseology, “Cleared (ILS/LDA) approach, glideslope unusable.”

New RNAV Options
As noted above, RNAV equipped aircraft could join an RNAV approach from direct to an IF if certain conditions were met. The NBAA and various airlines requested that this capability be extended to non-RNAV approach procedures, which the FAA has now authorized.

The rules are the same for direct to an IF for a RNAV, GPS, or other approach procedure:

1) The course may not require a turn at the IF greater than 90 degrees.
2) An altitude must be assigned by ATC that permits a normal descent to the FAF.
3) ATC provides radar monitoring to the IF.
4) The approach chart must identify the fix with the letters “IF.”
5) When an IAF is published, ATC must advise the pilot to expect the clearance to the IF at least 5 NM from the fix.

RNAV equipped aircraft may now also be cleared to join the approach at a fix between the IF and the FAF on both conventional and RNAV approaches if radar coverage is available, the stepdown fix is at least 3 NM from the FAF, and the intercept angle doesn’t exceed 30 degrees. These are essentially the same rules ATC must follow when vectoring an aircraft to final, except that the pilot may be cleared direct to the step down fix.

Before RNAV, all ATC had to say was, “Expect ILS Runway 10 approach.” You only needed to tune and identify the frequency, set the course and you were ready. With RNAV, you have to program the destination, select the approach from the database and finally select how you’re going join the procedure, which can be a feeder fix, IAF or vectors to final. Of course, if an IF or stepdown fix is where you join the procedure, you’ll have more programming to make that fix next. Throw in some additional confusion if the pilot sets up for a vector to final and then is cleared to a fix that might not be there and things may get busy.

RF Legs
RF (Radius to Fix) legs are part of the RNAV (RNP) and RNAV (GPS) specifications. However, they are primarily used as part of RNP procedures. The RF leg is a curved path between two fixes using a constant radius turn. The use of the RF leg permits procedures with greater lateral precision, requiring less protected airspace than fly-by fixes with turn anticipation accommodating a wide range of speeds, thus a wide range turn radii.

With this update, ATC now has specific guidance permitting clearances on a course or direct to a fix on procedures that incorporate RF legs. Directly joining an RF leg or joining within 3 NM of the lead fix of the RF leg is not permitted. Aircraft can be cleared to a fix with an angle of up to 90 degrees to the course if it is at least 6 NM prior to the lead fix of an RF leg. Between 3 and 6 miles from the lead fix, that shrinks to 30 degrees. Intercepting the course or fix inside the 3 mile limit is prohibited. Radar monitoring is required and speed restrictions may apply.

Garmin wrote a white paper for the FAA demonstrating that pilots of varying experience using typical general aviation avionics were capable of flying RF legs within the containment criteria established by the FAA. Since RF legs are part of the RNAV (GPS) specification, they are likely to show up in the future. There is already one RNAV approach today at Carlsbad, California that incorporates an RF leg; in Ketchikan, Alaska there is an RF leg on a feeder route for the ILS. Garmin navigators do not currently support RF legs, but we’re hoping that changes.

In Practice
In my experience, controllers rarely advise a pilot to expect a clearance to the IF. Instead, they use phraseology such as “Vectors to final” or “Vectors for the approach” when they intend the aircraft to join at an IF. Instrument instructors teach their clients to avoid using the vectors to final option on their GPS/FMS and to load the entire approach so that all available options remain for the pilot when they get surprised by the clearance direct to a fix.

In this revision of the 7110.65, there is an example using the phraseology, “Expect vectors to SHANN for RNAV Runway One-Eight Approach.” It might be less confusing if the phraseology was: “Expect direct SHANN for RNAV Runway One-Eight Approach,” since direct to a fix is not a vector. Hopefully the phraseology will be expanded to any fix on the procedure, and advise pilots to expect a clearance direct to any fix on the approach and not just an IF or step down fix. This would ideally be when you’re initially told which approach to expect, but certainly no later than the current 5 NM rule.

We should be careful while controllers adjust to these new procedures. We need to be particularly wary of any clearance that suggests a vector to final when direct to a fix might be the plan. With a few growing pains like these, the latest changes should both clarify previous uncertainty and offer new options for more efficient operations. Be prepared for these changes; they’re here.

John Collins, a CFI, CFII, MEI in North Carolina, has a keen interest in ATC procedures.