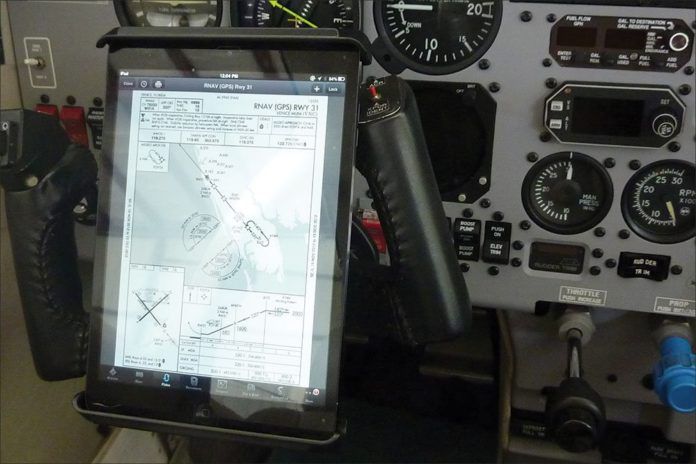 If you’re still using an iPad in the cockpit, you’re about to be so 15 minutes ago. Well, maybe. As we go to press this month, Apple has been pumping the new iPad mini into the market for about two weeks and after a couple of flight trials, we like what we see.

When the iPad first appeared two-and-a-half-years ago—yes, that long—it gained almost immediate acceptance as the ideal plate reader and chart manager. Apps multiplied and adopters swooned over the iPad’s escalating capabilities. A brisk cottage industry offering peripherals emerged and more such gadgets are on the way.

But there were complaints, too. Size was one. The iPad is just too big to comfortably place on the yoke and finding space for it elsewhere in a small cockpit isn’t easy. Wouldn’t it be better, some surmised, if the thing were 30 percent smaller? And that’s about what the mini is.

More Options
If you’re using an iPad and you’re comfortable with it, the mini is nothing but more of the same, only smaller. In our view, its scaled down size makes it what we could call the best plate reader yet. The fact that it weighs less than half of the original iPad’s 1.6 pounds is a plus, both for carrying and for yoke mounting, which is now quite practical and without compromise.

The mini’s overall dimensions are 7.8 by 5.3 inches and it’s only .28-inch thick. That compares to 9.5 by 7.31 inches for the iPad 2—the original was about the same—and a depth of .34 inches. The mini weighs .68 pounds.
The mini runs the latest IOS, 6.01, so it sports Siri and other advanced features. Display resolution is the same 1024 by 768 pixels or 163 pixel/inch Apple uses on the iPad 2. And here, Apple ran into some grief from the tech press, which was expecting better, given that the fourth-generation iPad has the high-res Retina display. That’s 264 PPI and 2048 by 1536 pixels. If you compare the iPad with Retina side-by-side with the mini, you’ll definitely notice the difference.

But is it a functional difference worth twice the price? In our view, it isn’t. The lower-res display is just barely noticeable in pixilated type, but not nearly to the point of illegibility. Although it was introduced with Apple’s typical hype, the mini is a catch-up product for Apple. Google has been dominating the 7-inch display market with its Nexus 7, forecast to sell nearly a million a month heading into 2013. The Nexus does have a better display (216 PPI) and the least expensive variant of it, with 8GB storage, sells for $199, $130 cheaper than the $329 entry-level mini. If you’re using an Android phone and/or prefer Android apps, the Nexus is every bit the player that the mini is, in our view. It’s the smaller size that’s the bonus, not that it’s made by Apple.

In the Cockpit
Following the iPad’s intro, various contrivances—kneeboards, yoke mounts, glareshield mounts—emerged to make its use practical in the cockpit. All of them were compromises that worked only by degree. In a small cockpit, a kneeboard the size of an iPad will, at various turns, interfere with something, if not everything. On the yoke, it’s large and heavy and can obscure things you’d like to see.

The mini fixes this or at least improves it. We tried it on a RAM yoke mount in a couple of steam gauge airplanes and found that it can be readily positioned to be viewable from the pilot seat without obscuring instruments in the center panel. Further, it’s sufficiently lighter than the iPad to function adequately with a RAM mount that clamps to the front edge of the glareshield in some airplanes, again without obscuring anything important.

But there are tradeoffs. Because the mini screen’s live area is two thirds the size of the full iPad, so too are graphic elements it displays smaller. While an approach plate displayed in full aspect may be readable for some of us on the iPad, the same is not necessarily true of the mini. Pinch scaling up addresses that, as does finger scrolling around the display to pick off the data you need. However, we note that on a yoke mount, with the display much closer to the pilot’s eyes, full-aspect mini plates may be readable by some.

On the other hand, some things aren’t scalable, such as the menu icons for functions in such apps as ForeFlight and Garmin’s pilot. This means these icons are slightly less readable on the mini than on the iPad. No problem if you know where and what they are, a bit of a squint otherwise. Whether the tradeoff for the smaller size is worth it is an individual decision, but we think the equation favors the mini.

One thing Apple has not addressed is screen glare. The iPads have the highest reflectance displays in the industry and in all but the most subdued lighting conditions, this proves to be a hindrance. An anti-glare screen protector is a must.

Buying Advice
Here’s where the analysis of the mini becomes murky. If you own a first-gen iPad now and want to upgrade, should it be the mini, the iPad2 or the iPad with Retina? We don’t think it makes sense to buy an iPad 2. It’s old technology now and although the mini is nothing but a downsized iPad 2, it does have the advantage of smaller size and lower weight. The advantage isn’t trivial.

If you like the full-size iPad, the Retina model is a terrific performer, but also the heaviest current iPad and, at $499 for the entry model, expensive. For pilots whose aviation use of the iPad is secondary to daily-life use, the full-size version may still be the better choice, especially if you like or don’t mind the larger size in the cockpit. For someone new to the tablet game, our money recommendation is the mini. At $329 for the wireless-only 16GB version, you’ll still need to spend another $100 for a remote Bluetooth GPS (Garmin’s GLO or the Dual are our choices) and a good screen protector.

Bump up to the cellular version and you’ll spend $459, but the cellular models have onboard GPS. iPad GPS chips seem to function well these days so that may be good enough. Still, we like the remote receivers which provide more robust positioning. If you want just a plate reader, you needn’t bother with GPS at all.

And let’s give the Android Jelly Bean OS its due. The Nexus 7 is a credible performer at a good price. Although Android doesn’t support as many apps as the iPad does—it will run WingX and Garmin’s Pilot, for example, but not ForeFlight—it has enough apps to offer a choice in plate reading; more are coming. If you’re a tablet newbie, the way to shop is via apps first, then the pad to run them. The iPad will run all of the principle aviation apps, but the Android tablets won’t, at least not right now. Also, it makes no sense to over-buy on technology you’re only going to have for 18 months before upgrading to a newer model.