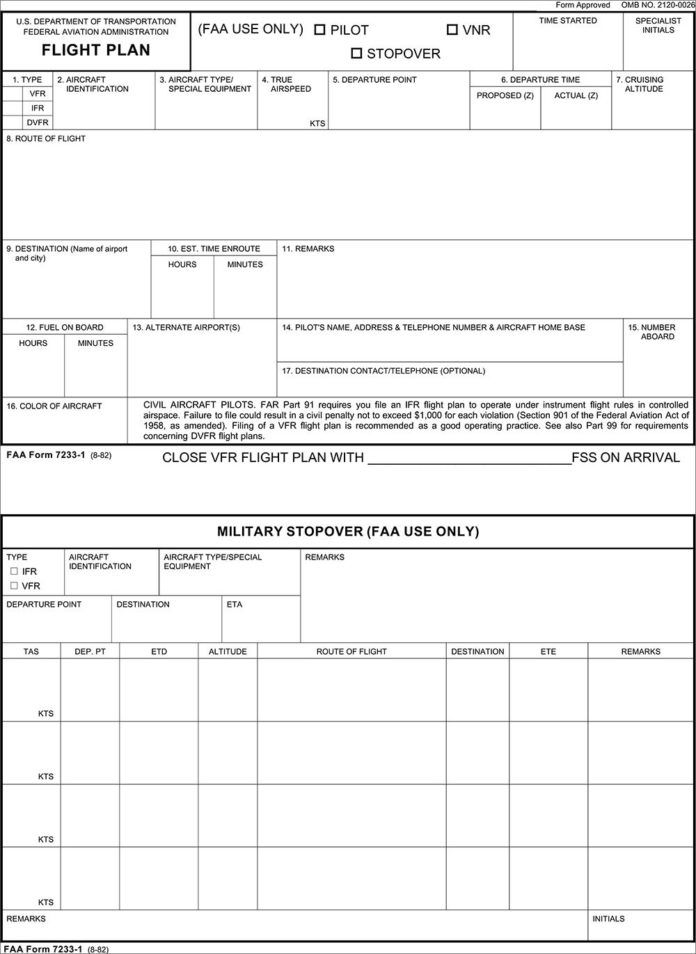 If the international aviation bureaucracy were ever mated with a one-size-fits-all computer program, the progeny might well be the ICAO International Flight Plan. Everything anyone might wish to know has a place on this form. But, in case there’s an obscure bit of trivia without a special code or box in which to put it, there’s a way to handle that. If Wilbur and Orville had been faced with anything like this, we’d still be looking wistfully to the sky.

Who Cares?
For now, you can still use the same old flight plan form we’ve been using for decades, if you don’t file an RNAV departure or arrival route and you won’t leave the relative insulation of the US borders. But there is speculation that the old form will be completely replaced by the ICAO form at some point. As of late last year, if you do want an RNAV route or you fly out of the US, we’re sorry, but you must use the International Flight Plan form, FAA 7233-4.
To be fair, most of this form is simple, self-explanatory, and translates well from the existing form. But there are some nuances and places that are so complex they defy understanding.

Walk-Through
Let’s walk through the form. Reference the mapping of data from the old form to the new. In a flash of brilliance only a person working under a spotlight over his eye shade can appreciate, the form starts with Item 7. From there, the numbers at least increase, but they’re not necessarily consecutive. Perhaps all the missing items have joined your sox that are missing from the laundry.

In Item 7 enter your full registration number: “N340FB.” Next, tell ‘em if you’re IFR, VFR or a combo and which is first. Next is the type of flight (Airline, GA, etc.).

You specify a flight of multiple aircraft in Item 9. Use “1” if you’re alone. Next is your aircraft type—often a different designation than you’ve used for years. Look up your aircraft in ICAO Doc 8643. (Google it.) Now, it’s critical that you tell them the wake turbulence category of your C-182, but at least those codes are simple for light, medium and heavy. The equipment designation is in Item 10 and the transponder type goes after the slash. More on those below.
In Item 13, put the ICAO designation for your departure airport and proposed departure time in UTC. Cruising speed and altitude go in Item 15, formatted as indicated in the table.

The route is similar to what you specify now, but instead of listing consecutive fixes between which you’re going direct, you insert the designation ” DCT ” (with spaces) between those fixes. You may specify a fix using distance and radial from a VOR in the format VORrrrdd where VOR is the VOR name, rrr is the radial and dd is the distance. Item 16 holds your ICAO destination, estimated time en-route and alternates. Note that the requirement for a second alternate is primarily for certificated operators, not GA.

Other Information, Item 18, holds data that doesn’t fit the requirements of the items where you think it should go. If you’re using an airport that has no ICAO designation, use “ZZZZ” in the item for that airport and put the actual airport in Item 18 after a code indicating which airport it is. Do not leave Item 18 blank; it needs a “0” (zero) if you have nothing that goes there.

Equipment
The complex equipment coding for GNSS RNAV and Performance Based Navigation starts in Item 10, with further delineation in Item 18. The exact codes you enter are determined not just by the capabilities of your wonder-box, but by any POH/AFM or installation restrictions, and also by pilot training (or Operational Specifications requirements for certified operators). We assembled the most common unrestricted GA codes in the tables.

A typical GA airplane with a Garmin GNS430W/530W or a new GTN-series navigator with a Mode S transponder with extended squitter (ADS-B Out) and 1090 MHz ADS-B In, assuming an unrestricted installation and pilot, would specify equipment in Item 10 as SGR/LB2 and would put NAV/D1E1A1 PBN/D2C2O2S1 in Item 18.

The challenge of these two items comes from not knowing your exact equipment capabilities. For example, you may well simply not know if your Mode S transponder has ID and enhanced surveillance capabilities. (If it’s new in the last few years and up to date on software revisions, chances are it does, but you may have to check with your avionics installer or the equipment manufacturer. You may need exact part number and serial number, along with software revision level before you can get the information you need.)

Item 19, the entire lower section of the form, is search and rescue information. Enter your fuel endurance in the first block, the number of persons on board, and various information about any survival equipment you may have. As you’ve always done, you can provide information about your aircraft colors and markings, the name of the pilot-in-command and any free-text remarks.

Tip of the Iceberg
Although this information should suffice for the vast majority of general aviation aircraft, pilots and operations, the full description of the form runs to dozens of pages. The simplified version for the AIM is only 17 pages.

One final note is in order. We’ve taken great pains to present this information to you as accurately yet simply as possible. However, the depth of this form for the equipment codes and subcodes in particular is staggering. We spoke to major equipment manufacturers to see how they believe their equipment should be coded, and the lengthy conversations were littered with the words, “it depends” and “we’re not sure.” We suspect that clarifications and simplifications will be forthcoming for the use of this form in FAA-governed airspace for years to come.