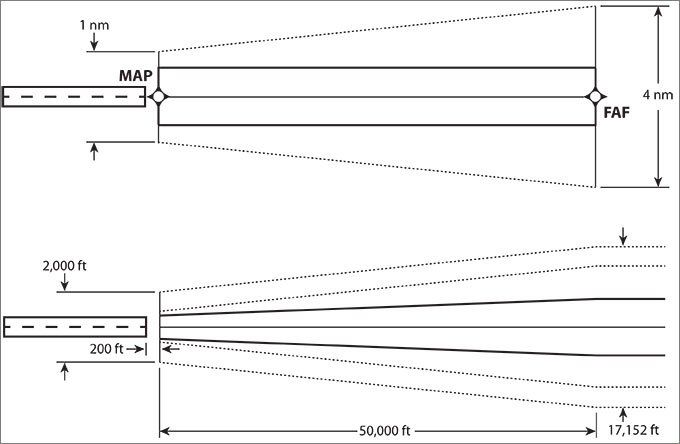 One of the things I see often on IFR stage checks and IPCs is a lack of familiarity with the different kinds of GPS approaches and their respective capabilities and idiosyncrasies. Introduction of Localizer Precision (LP) approaches has made that worse. Given that the U.S. has over 12,000 GPS approaches, it’s time we mastered the variables.

GPS-derived vertical guidance is called a glidepath, and is indicated on most electronic displays as a diamond pointer in the same magenta color as lateral GPS navigation. ILS glideslopes are usually shown on displays with a green diamond pointer.

Because ICAO Annex 10 defines the ILS as a precision approach, and specifies all its components in great detail, a different term had to be found for GPS approaches that offer the same precise vertical guidance. Hence the term APV, Approach with Vertical Guidance, is defined in ICAO Annex 6. LNAV/VNAV and LPV approaches are both APVs.

The LNAV+V approach is a hybrid approach where the vertical component is mathematically derived instead of using GPS vertical position. So, even with the glidepath indicator they’re still considered non-precision. This has led to a lot of confusion as is well documented in Lee Smith’s excellent articles on vertical descent angles in March and June.

Note also that all GPS navigation is to-to; there is never a reference to a waypoint behind you. And you can retire your stopwatch for GPS approaches. Nothing is timed on any GPS approach.

A VOR approach is the nearest equivalent to an LNAV, but LNAV approaches offer much greater stability, no course scalloping with the VOR needle wobbling back and forth, and 66-foot horizontal accuracy.

LNAV approaches have fairly high MDAs, typically 400 feet or higher. One reason is that the TERPS-defined Obstacle Clearance Area is fairly large, a trapezoid beginning at 4 NM wide at the FAF and narrowing to 1 NM at the MAP waypoint. This is the same clearance surface for LNAV+V and LNAV/VNAV approaches.

The other reason for higher minima is that LNAVs lack WAAS precision: WAAS improves signal accuracy both horizontally and vertically from 20 meters to about one—a 20:1 improvement.

LNAV+V
The first GPS approach with any vertical component was the LNAV+V, a Jeppesen mathematical construct. It offers a non-precision “advisory glidepath.” Many pilots incorrectly assume that an LNAV+V, offering a glidepath that looks and acts like an ILS glideslope, offers obstacle clearance to the runway. That’s not necessarily true.

To recap a bit of the information across those two articles mentioned above, there is clearance between the FAF and the MAP, same as always. Between the LNAV’s MDA—it’s a non-precision approach—and the runway, you’re only assured continued clearance if the AeroNav charts depict the gray stipple line below the MDA. Without that symbol, you’re on your own. Jeppesen has no direct equivalent, but if there is a note that says only authorized users can substitute DA, you know you’re safe. But lacking that note is ambiguous—you may, or may not have a clear glidepath below MDA.

The vertical descent angle (VDA) depicted as an advisory glidepath starts at or shortly after the FAF and continues to the runway threshold at the crossing height. In some cases this is actually part of the underlying TERPS data, but in others it is just a mathematical model. It offers a stabilized approach, eliminates the more challenging “chop-and-drop” between the FAF and MDA, and assures obstacle clearance between them. The VDA is calculated to clear step down fixes. If necessary it will delay the start beyond the FAF.

Like any non-precision approach, you may not descend below MDA unless you meet the visual requirements of 91.175. Those are the rules, regardless of what your glidepath needle is telling you.

The vertical component of LNAV+V is not an FAA specification, which is why you won’t see LNAV+V on an approach chart. Remember, these are simply lateral navigation approaches (LNAV) with a mathematically derived VDA glidepath as a supplemental reference. The FAA is beginning to replace VDA data with the note “Descent Angle NA” on approaches lacking proper obstacle clearance. If no VDA value is present, no LNAV+V will be available, and vice versa.

To help sort out the confusion, Garmin only displays an LNAV+V if LNAV minima are published and no LNAV/VNAV or LPV minima are available. The unit must also be receiving WAAS with the same accuracy as if for an LNAV/VNAV approach. If only circling minima are published or if the approach course is misaligned more than 30 with any runway heading, no vertical advisory guidance is offered.

LPV
The design of an LPV approach incorporates angular guidance with increasing sensitivity as an aircraft gets closer to the runway. Sensitivities are nearly identical to those of an ILS at similar distances. This helps pilots translate their ILS flight skills to LPV approaches. There are over two and a half times more LPV approaches than ILSes in the U.S.

An LPV is similar to an LNAV/VNAV except it is much more precise with one meter vertical and horizontal accuracy, courtesy of WAAS. LPVs enable descents to 200 to 250 feet above the runway with visibility minimums as low as mile. LPV approaches are operationally equivalent to ILSes but cost significantly less because no ground based navigation equipment is needed. An LPV must meet the same TERPS criteria as an ILS and requires at least a 3,200-ft runway. An LPV is a Category I approach.

LP
Localizer Performance, the newest non-precision WAAS approaches, are being sited at locations where terrain or obstructions prevent vertically guided LPV procedures. They’re gaining popularity; if you haven’t seen one yet, you will soon.

WAAS receivers certified prior to TSO C-145b and TSO C-146b, even if they have LPV capability, may not contain LP capability without an upgrade. GNS 430W/530W units require at least version 3.3 from August 2009 to support LPs. G1000s of all revisions should support LPs.

Receivers capable of flying LP procedures must contain a statement in the Flight Manual Supplement or Approved Supplemental Flight Manual stating that the receiver has LP capability, as well as the capability for the other WAAS and GPS approach procedure types. Jeppesen began including LP approaches in NavData distributions in February, 2013.

LPs offer WAAS-enhanced lateral guidance. Lateral sensitivity increases as an aircraft gets closer to the runway. Unlike an ILS and a localizer, an LP is not a failback mode for an LPV.

LP approaches have more sensitive angular lateral guidance and smaller position errors to provide a lateral-only procedure similar in accuracy to a localizer. An LP may provide lower minima than an LNAV, around 300 feet, due to its narrower obstacle clearance surface.

Da Box
Your navigator will offer you the best approach(es) available. Once you choose, the navigator cannot upgrade on its own to a more accurate approach.

Nor do navigators fail backward to a lower service level once an approach becomes active. A WAAS G1000 will issue an APR DOWNGRADE advisory if WAAS vertical guidance is lost, in which case you load an LNAV approach. If flying an APV and the vertical needle flags, you may be able to revert to the LNAV depending on circumstances. However, if the lateral limit is exceeded on an LP approach, you will have to miss because there is no way to reset the alarm while the approach is active.

I’ll leave you with a little secret. You can load a WAAS approach by the channel number—a five-digit code found on the approach chart.
In addition to having some rather impressive instructor credentials, Fred Simonds tends to geek out on critical details like this, and we’re fortunate he does. See www.fredonflying.com.