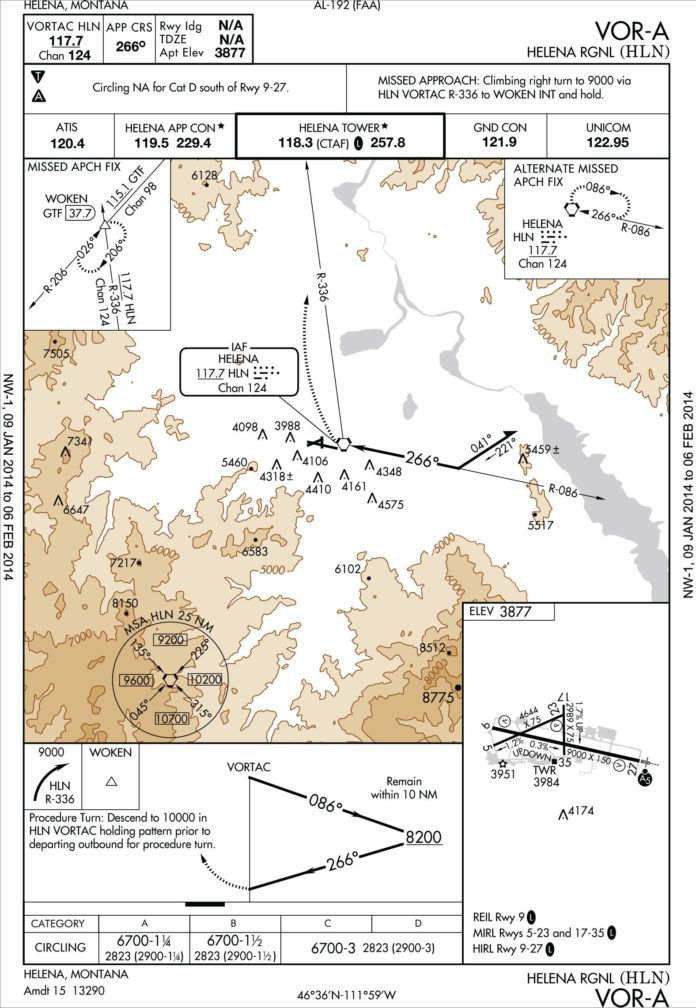 A solid understanding of the rules and types of course reversals on an approach is essential. Course reversals are part of the FAA’s guidance for IPCs. So, if you come out of proficiency training without feeling good about them, you didn’t get your money’s worth. Regardless, you should be familiar, lest you hear “unable radar vectors” in the soup when you least expect it.
There are two types of course reversal: the procedure turn (PT) and the hold-in-lieu-of-procedure-turn (HILPT). They both have the same basic definition: A maneuver prescribed when it is necessary to reverse direction to establish an aircraft on the intermediate approach segment or final approach course.

That reversal is necessary if you can’t be lined up with the approach course on your own, such as via a route to an initial or intermediate fix labeled “NoPT,” or by vectors from ATC. If adequate radar coverage is not available, or the controller cannot comply with the requirements in the ATC handbook, you will not be getting vectors. If there is no other way to line up on final via a published route, you will be doing a course reversal. It’s best to know how.

The Good Ol’ Procedure Turn
According to the FAA’s Chart User’s Guide (CUG) and AIM 5-4-9, the standard procedure turn is depicted on AeroNav charts by a barbed arrow that “indicates the maneuvering side of the outbound course on which the procedure turn is made” and nothing more. The arrow juts off of the outbound course at a 45-degree angle, and suggested headings for a 45-degree diversion and subsequent intercept are listed.

The point at which you begin the actual PT and the rate of turn is up to your discretion, so long as you remain within the required distance. Look at the VOR-A approach into Helena Regional Airport, Montana. The barbed arrow tells us that our procedure turn is to be flown on the north side of the course line. The chart suggests a 041 degree heading followed by a turn to 221 degrees to intercept final. This works well, so long as we “Remain within 10 NM” as instructed.

The standard procedure turn distance limitation is 10 miles. But, you might see five-mile limits where only Category A or helicopter procedures exist, and 15 mile limits might be used at airports dealing with high-speed traffic for whom 10 miles is a little tight.

Approaching the HLN VORTAC, you’re cleared for the VOR-A and are told to maintain 12,000 feet until crossing HLN. Your briefing discovered the note in the profile view telling you to descend in the HLN holding pattern to 10,000 feet before attempting the course reversal. (You also noticed the HLN holding pattern depiction in the Alternate Missed Approach box.)

Once you descend to 10,000 feet and cross HLN on a 266 degree heading inbound in the hold, you need to head inbound on the approach. Remember, the barbed arrow is just a suggestion and there is no requirement to get re-established outbound on the HLN 086 degree radial and do the 45/45 turn as depicted. You would be well within your rights to just do another turn in the hold (or as the AIM refers to it, the “racetrack pattern”) and get established inbound, provided you have enough room to get to the desired altitude.
In this case, with no intermediate approach segment, once you’re established inbound within 10 miles of HLN, you are inside the “final approach point”—there’s no FAF—and you can descend to the MDA of 6700 feet MSL. The published procedure turn altitude of 8200 feet permits a more gradual descent to MDA than starting from 10,000 feet.

This raises a common question: when can you descend to this altitude? Could you do it while outbound in the racetrack pattern, or would you have to get established on the 086 degree radial to make use of this nice intermediate step? AIM 5-4-9 clarifies: “Descent to the procedure turn (PT) completion altitude from the PT fix altitude (when one has been published or assigned by ATC) must not begin until crossing over the PT fix or abeam and proceeding outbound.” The same paragraph cautions you to look on the chart for a requirement to become established outbound, even providing a handy sample picture in AIM Figure 5-4-15.

With no such note, you’re free to descend to the procedure turn altitude of 8200 feet once abeam of HLN outbound in the hold. Bear in mind as you plan your approach that HLN is on the field and doubles as the MAP, so you’ll want to give yourself enough room to descend to 8200 feet outbound, then to the 6700 foot MDA inbound on the 086 degree radial (266 degree course).

Flying one-minute legs in one circuit would be far from stabilized, requiring 1800 feet per minute outbound and 1500 feet per minute inbound. You’re probably better off to grab that 086 degree radial outbound after descending in the hold, using a good chunk of the available 10 miles, and make a procedure turn (45/45, 80/260, or whatever you want) to get established inbound well out from the field. Also, if you’re landing into the wind, you likely have a tailwind outbound, so a standard two or three minute outbound time could put you over the 10-mile foul line.

A common misunderstanding that you must perform your turns away from the airport probably comes from Jeppesen’s clear depiction of a 45/45 procedure turn, with the intercept leg further from the airport. Done within limits, this is fine. However, you aren’t restricted to following Jepp’s black lines.

Many students get close to the 10 mile limit, usually either from poor speed control or poor wind awareness. They then exceed the limit as they turn away from the airport. If you’re close to the limit after flying the turn outbound, turning back towards the airport to intercept could save the day. You have to follow the charted course reversal only on a teardrop or a hold-in-lieu-of-procedure-turn.

HILPT
The HILPT is shown on both AeroNav and Jeppesen charts as a solid black holding pattern line at an IAF. Note the full thickness of the line. Some charts show a holding pattern at an IAF using a thin line, which simply indicates that it is a common holding fix, not a HILPT.

Look at the RNAV (GPS) RWY 10 approach in Caldwell, New Jersey. If you’re cleared for the approach via SBJ, you’d fly the SBJ 042 degree radial to the intermediate fix (IF) at WOKPU, then turn inbound towards HILKI.

According to 14 CFR 91.175(j), “In the case of a radar vector to a final approach course or fix, a timed approach from a holding fix, or an approach for which the procedure specifies ‘No PT’ no pilot may make a procedure turn unless cleared to do so by ATC.”

Why would ATC give you a procedure turn if it’s not required? AIM 5-4-9 (a) says it would have to be at pilot request—perhaps to lose altitude or to gain time. If no such request is made or ATC approval is not given, you’re not authorized to make the turn and must proceed straight in.

At WOKPU you’re expected to reverse course via a standard holding pattern entry. To WOKPU via SAX, it is a simple direct entry, with a right turn to 276 degrees. What leg length? The profile and plan views show it to be a four mile holding pattern—fairly typical of RNAV approaches. Other approaches use a standard one-minute leg length (inbound leg time, of course). One minute isn’t much time, so it’s best to hit that IAF on speed and properly configured.

To reduce your stress on the inbound leg, especially on a one-minute hold, begin descent towards your intermediate approach altitude as soon as possible—once crossing or abeam the fix outbound. Coming from SAX, as you cross WOKPU, you could descend to 2700 feet if you were higher. Maintain your holding speed in the descent for best holding pattern time management.

After the HILPT
With a HILPT, a common question arises about when we can cross the FAF inbound. Say you’re inbound to WOKPU from SAX, and are instructed to hold as published due to traffic still on final. Your approach clearance comes while outbound in the hold. Would you treat WOKPU as the IAF and make another turn in holding as a HILPT? Toss that one around next time you’re hangar flying to stimulate the conversation.

AIM 5-4-9 explains: “If cleared for the approach prior to returning to the holding fix, and the aircraft is at the prescribed altitude, additional circuits of the holding pattern are not necessary nor expected by ATC.” The statement goes on to say that if you want another turn, it’s up to you to advise ATC. So if you’re holding at WOKPU at 4000 feet and received approach clearance, another circuit would be expected to reach the prescribed altitude of 2700 feet. But, if you’re at 2700 feet, the requirement is to cross WOKPU and continue to HILKI.

Any confusion on this matter while it’s actually happening can be cleared up with simple communication. If at 4000 feet in the hold and ATC clears you for the approach, a simple statement that you could get to 2700 feet by WOKPU and continue straight in might get you an amended clearance, or at least a clarification.

Remember, if given a hold at WOKPU, you must report “the time and altitude or flight level upon reaching a holding fix or point to which cleared” per AIM 5-3-3(1)(f). That’s when you cross WOKPU, not after you’re established.

While we’re on the subject of reports, it is common for ATC to ask you to report procedure turn inbound on a full procedure. Since you are likely doing a full approach because there’s no radar coverage, this acts as a position report for ATC. The Pilot/Controller Glossary defines “procedure turn inbound” as, “that point of a procedure turn maneuver where course reversal has been completed and an aircraft is established inbound on the intermediate approach segment or final approach course.” Since the same glossary defines established as “to be stable or fixed on a route, route segment, altitude, heading,” it’s pretty clear that this report should be made once you have positive course guidance for the inbound leg.

Note in AIM 5-4-9 the speed limit of 200 KIAS for all procedure turns, and the holding speed limits (200 KIAS below 6000′ MSL, etc.) in AIM 5-3-8(j)(1)(a) apply to the HILPT. It’s always a good idea to get the speed back before crossing the IAF outbound on a full procedure approach, just so you can make the most out of the 10 mile limit or HILPT leg length.

The course reversal is a very straightforward maneuver, and one that all instrument pilots should be comfortable performing. A good understanding of AIM 5-4-9 and a mental picture of the protected airspace will have you prepared when a full-procedure approach becomes necessary, and will make you see radar vectors to final as a luxury and not a necessity.

This article started life as a two-page IFR Clinic, but Evan Cushing got so turned around while writing it that it became a three-page feature. Evan is a career aviator and educator.