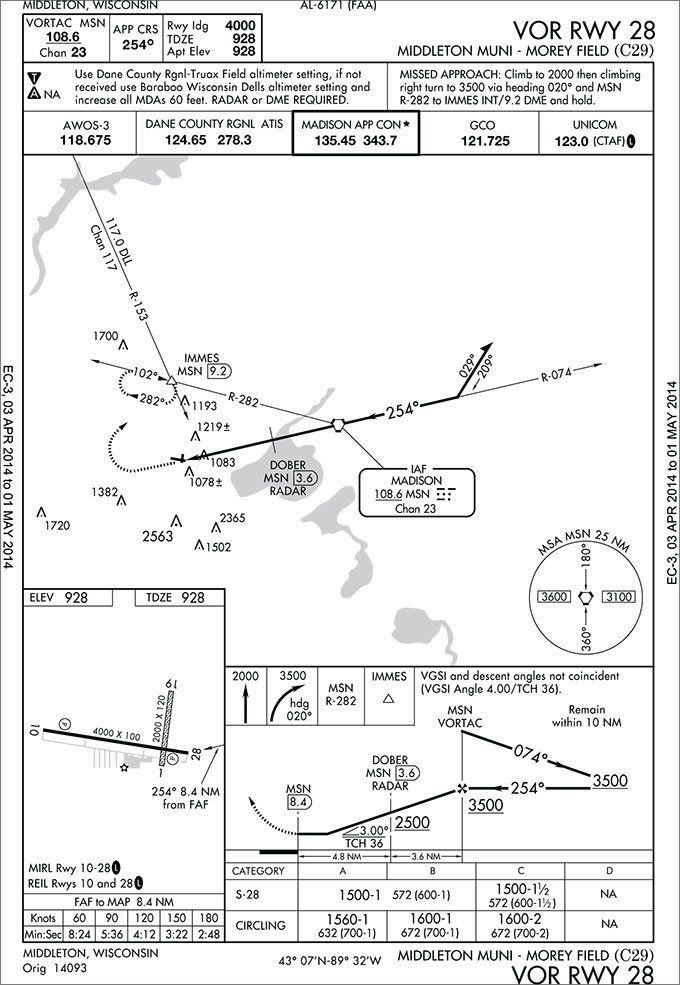 We learned 14 CFR 91.171—the “VOR Check” rule—during instrument ground school. In this era of satellites and GNSS, this rule is often overlooked as VORs become just named fixes instead of navigation beacons. Even with the latest navigation equipment, however, 91.171 can rear its head from time to time.

The Wind Up
You have a trip tomorrow to visit your brother in Cortland, N.Y. (N03), and you hope to visit the Baseball Hall of Fame in nearby Cooperstown.

As you fire up the plane and turn on the avionics master, the screen on your GPS does a supernova. It’s toast. Looks like you’re down to VHF navigation.
Say you actually performed a VOR check 27 days ago by overflying an airborne checkpoint that is published in the A/FD. NAV 1 was within five degrees, making it compliant with 91.171(b)(3).

Your destination is Cortland County-Chase Field. You’re relieved when you see that there is a non-RNAV approach. The VOR or GPS-A approach is a circling-only approach, based off the Binghamton VOR (CFB). It will get you within 1082 feet of the field and requires visibility of 1-1/4 nm. Off you go, planning your first VOR approach since your last IPC.

Let’s look at the TERPS-protected airspace for this approach. A VOR approach with a FAF, has the protected area divided into two components. The primary area, centered longitudinally on the final approach course, is 1 nm wide at the facility (1/2 mile on either side of the centerline), and expands uniformly to 5 nm wide (2.5 nm on either side of the centerline) at 30 nm from the facility.

The VOR or GPS-A at N03 is a true marathon of an approach, with the MAP falling 26.2 DME from the CFB VOR. At a 1 mile final, we would be at roughly 25 DME, or about 83% down that 30 nm protected corridor. A little math shows that our primary area is about 4.2 nm wide at that point. At 4.2 nm wide, we have about 2.1 nm on either side of the centerline with 250 feet of obstacle clearance.

The Pitch
To put this in some perspective, let’s revisit some rules of thumb regarding the VOR. Remember, since VOR course deviation is determined by degrees of error, the actual distance you are off course increases as you are further from the VOR, all with the same deviation indication.

Remember, our receiver is five degrees off. Five degrees at our 25 DME point would be about two miles—if we showed ourselves precisely on the 002 degree radial, we would actually be at the edge of the primary area. A one-dot error—well within PTS limits—puts us at the edge of the secondary area with just a few feet of obstacle clearance. That also explains why this approach is not authorized without a local altimeter setting.

Any popular mapping program shows that the obstructions grouped east and northeast of IILEN (the FAF) are some fairly impressive antennas on the appropriately named Tower Road. These structures are just under 300 feet tall and exceed 2000 feet MSL—uncomfortably close to our 2280-foot MSL MDA.

With the angular deviation of our inaccurate-but-legal VOR receiver, and the distance from the VOR station being so great on this particular approach, you can see that it is quite easy to be fat, dumb and happy with the needle nearly centered while you’re pushing the borders of TERPS protected airspace and flirting with steel structures.

Perhaps you figure the obstructions are located far enough from the FAF, and that a stabilized descent from the intermediate approach altitude of 3800 feet MSL would be safe even if we were that far off the published course laterally. Well, if your DME is functioning (provided you even have DME, which few GPS-equipped aircraft do), your identification of the 22 DME to the FAF could be reasonably accurate.

Swing and a Miss
But, let’s assume we don’t have a DME and when we tested VOR #1 over the airborne checkpoint, we weren’t able to check the now-necessary VOR #2. So, we check it against VOR #1 with a dual VOR check, per 91.171(c). It showed four degrees to the right of VOR #1—at the legal limit. Remember though, VOR #1 was already off by five degrees, so if this were a right-hand error as well, VOR #2 is now off by nine degrees to the right.

Looking at the approach chart, we see that IILEN can be identified by the ITH 092 degree radial. ITH is about 11 miles from IILEN. (Not charted.) For ease of calculation, we’ll call it 10 nm. At 10 nm from the station, each degree is 1/6 of a mile, or about 1000 feet. With our VOR #2 being nine degrees off to the right of the actual radial, we push our FAF roughly 1.5 miles to the south, which gets our descent started sooner.

At a 90 knot groundspeed, this distance would be covered in a minute. At a nice 500 fpm descent, this would put you about 500 feet lower as you crossed the “real” IILEN. Notice, however, that IILEN is only 4.2 nm from the MAP, and you need to lose a little over 1500 feet to get from the intermediate approach altitude to the MDA.

If your plan was to be at MDA a mile prior to the MAP so you could get oriented for your circle, you would need to lose 1500 feet in a shade over three miles. At 90 knots groundspeed, you would need to lose this altitude in about 2 minutes, requiring a descent of about 750 fpm. This would put you 750 feet lower over the “real” IILEN and descending. It now doesn’t seem so unrealistic to be skimming those radio towers that looked so comfortably out of the way on your approach chart, does it?

The moral of the story is that, even in this modern era of GPS when we might go years without actually using VOR navigation, taking the time to perform proper VOR checks is good practice. Many times, a half-hearted dual-VOR check is used to satisfy the regulation, and it’s easy to settle for the errors permitted by 91.171. However, let this scenario be a word to the wise: Just because it’s legal doesn’t make it a good idea. VOR checks are mandatory, a good idea, and can indicate when you should consider a repair, even if they do meet the letter of the regulations.

Evan Cushing had a long career at a regional airline, but has now switched to a cushy job as an educator where he has plenty of opportunity to check his VORs.