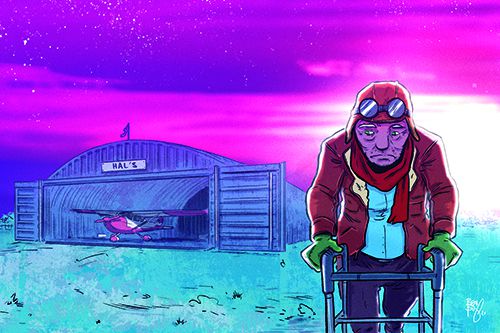 Recently I had an e-mail conversation with a friend who’s also been a contributor to these pages. I’ll fictitiously call him “Hal.” Hal started flying early in life and was lucky enough to make it his life’s work. He flew heavy iron in the military, and then went to work for one of the major U.S. airlines. His timing was perfect; he never got furloughed, so he flew his entire adult life with no interruptions.

When Hal aged out of the airline, he was far from ready to actually retire. He bought a small ranch that was big enough for a 2900-foot grass strip. The ranch house suited him and his wife quite well. The property included some nice outbuildings that consisted of a shop and the ample storage a ranch seems to need. Of course, one of his first orders of business was to clear a runway, build a hangar, and get an airplane.

Hal wasn’t done. He started instructing at a major commercial flight training center, where he imparted his decades of wisdom and practical humor to younger aviators.

As it turns out, Hal and I needed a hip replacement about the same time. Since I’m over 10 years younger than Hal, in good time mine fully healed, “Know When to Fold ’em” leaving absolutely no lingering indication that I even have an artificial hip. His remained troublesome enough that he said, “After my hip replacement, it was difficult to get in and out of my [airplane]. Plus it just wasn’t fun anymore. So I sold it. I will fly again no more, forever.” He added, “I also quit my gig at [the training company]. It got to where it was not fun anymore [either].”

”Of course, this led me to reflect on my own life. I’d wanted to be an airline pilot since my first flight in high school, but circumstances and timing conspired to make that a singularly bad idea. Instead, I had a rewarding 30-year career in high tech, only to quit in my early 50s and start over as an airline pilot. I flew at the airline for over 12 years, during which I also landed here.

With a nod to singer/songwriter Kenny Rogers, as conceptually sad as it is to realize you’ve gotten too old to keep flying, it’s far better than the alternative. Congratulations, Hal. You set a standard for the rest of us.