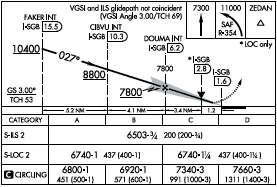 Recently a reader wrote to ask me a question that’s been provoking a lot of thought here in the IFR virtual offices. This particular reader is an airline pilot for a foreign airline that operates into the U.S. and under FAA Part 121. Besides “flying the line” he’s also part of their Flight Standards, so it’s not a trivial question.

The reader noted that an ILS is often published as an ILS or LOC approach. Such approaches will therefore offer minimums for the ILS and for the
LOC-only version. But, many will also often publish circling minimums, such as shown above for my home ’drome of Santa Fe, NM.

Okay, enough setup. The reader’s question was simply “Can you circle from the ILS, or do you have to fly the LOC version if you’re going to circle?”

I admit that my knee-jerk first response was, “Who cares?” But, recognizing that is neither an appropriate response to a foreign pilot nor a suitable answer as editor of a respected aviation journal, I gave it more thought.

That additional thought took me in a number of directions, but before I explored any more, I concluded it would be best to reach out to our resident TERPSter. So, I fired off an
e-mail to him and he had both of the same responses I did. So, let me lead you though our thinking.

Like our reader, I thought I read in passing on some forum or someplace that to circle, you’d have to fly the LOC version. Then it hit me.

But let’s keep digging. Let’s not call an ILS to circling mins a precision approach. Instead, just for this discussion, let’s call it a LOC/GS to an MDA. Would that work?

On a localizer approach, it doesn’t matter how you descend, so long as you 1) clear any stepdowns on the way, and
2) don’t bust the MDA. Well, if you’re on the LOC and your descent rate happens to precisely match the GS, you’ve usually got #1 covered. So, then, while following that GS if you don’t bust the MDA, you’re safe, right?

Why do I mention this here? To me, this is great stuff. It keeps the juices flowing, keeps me thinking, and prevents me from falling into the rut of blindly following along. Hope it does the same for you.