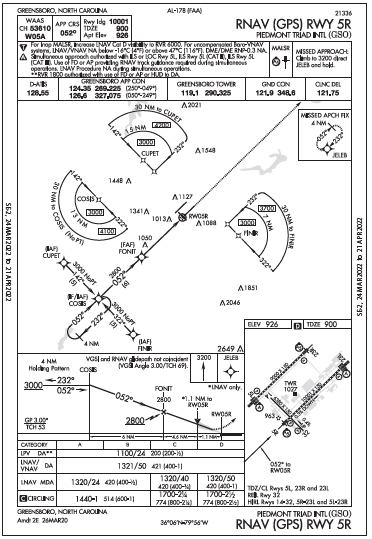 When looking at the KGSO GPS Rwy 5R approach in “Gettin Down” from June 2022, I thought the TAA in this case was the 30 NM arc from COSIS. So at 25 NM heading 052 toward COSIS I should be at 4100, at 13 NM 3000. Once cleared for the approach without altitude instructions I should change altitude. Is the TAA just the “T” at COSIS?

We’re not entirely clear on your question, Mark. Note that the segments of the TAA are each centered at a different fix as noted on the arced text on the outside ring. But, yes, once cleared for the approach, if you are southwest of COSIS on a 052-degree heading toward COSIS, once inside 30 NM you may (but don’t have to) descend to 4100 feet and at 13 NM from COSIS you may descend to 3000 feet.

If you’re north and heading south toward CUPET, once 30 NM from CUPET you may descend to 4200 feet and at 15 NM you can descend to 3000 feet. Similarly, there’s a TAA segment at FINIR.

As a commercial 121 air carrier pilot I have had several instances where wind and ground speed information assisted in a safe operation. Most if not all IFR aircraft now have access to ground speed and this should be closely monitored on approach and landing. I have seen as much as a 40 knot tailwind on an ILS approach into Chicago shearing out to a headwind at ground level.

This is, of course, very dangerous when combined with a short runway (KMDW), precipitation, and excess energy to dissipate. Another strange example is that of landing and roll out at a foreign location after an all-night Atlantic crossing. While on approach the tower stated that the last 2000 feet of runway had a light coating of frost.

Okay, frost is ice. Not realizing the serious potential implications of this situation I came out of reverse thrust about the same time I reached the ice, uh “frost.” While monitoring the groundspeed the first officer shouted “we are speeding up.” I again went into reverse and stopped just short of the end of the runway with almost no braking action and a steep drop-off at night. Monitoring groundspeed is important in these situations.

I appreciate your magazine.

I remember one time at Denver in winter after a rather nasty ice storm. I was taxiing and, of course, the route was long and circuitous because of some construction. Our company SOP prohibited use of thrust reversers below a certain speed.

Anyway, the taxiways were a sheet of ice and braking was useless in keeping idle thrust from propelling us far too fast for safety. So, using some of that “Captain’s authority and judgement” they taught us about, I cracked the reversers and all was well … until the turn.

Nosewheel steering was about as useless for a 90-degree turn as the brakes, so I ended up navigating the turn with only one reverser out on the inside of the turn, and the engine on the outside of the turn at ground idle.

It seemed to work out. We stayed on the taxiway and didn’t hit anything, and nobody felt it necessary to ask me about using the reversers for that low-speed taxi.

But, I suspect it took a few minutes at least before my blood pressure returned to acceptable levels. 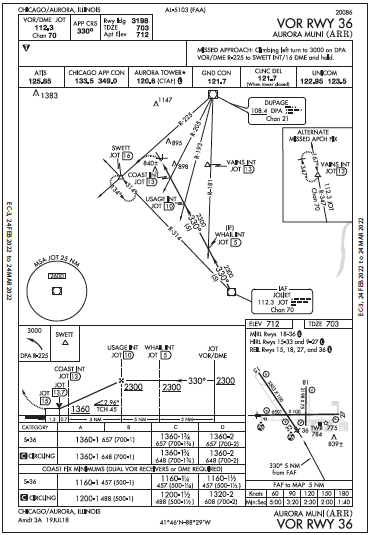 Yes, I see the S-36 in the minimums section of the chart. But it makes no sense to me whatsoever. The FAA requirement to access all relevant information in preparing for a flight, surely could not in all reality require looking up the January 28th, 1988 Chicago Tribune for preflight information, could it? Do you really think this makes sense or is the safer option rather just flying straight in to Runway 33?

We agree, this approach arrangement is odd. That’s why it was a good one to review in the Clinic. No, you don’t need access to old newspapers to comply with the regs; that was included in the article just as some interesting background information on how the approach came to be. But, as designed and published, the VOR Runway 36 approach final approach course is for all practical purposes straight in to the longer Runway 33 with its superior lighting. But being a Runway 36 approach, circling minimums are required to land on Runway 33.

Note that we don’t design these approaches. We only analyze and explain them the best we can. 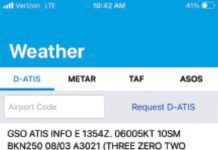 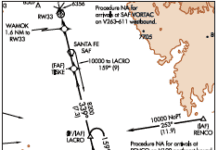