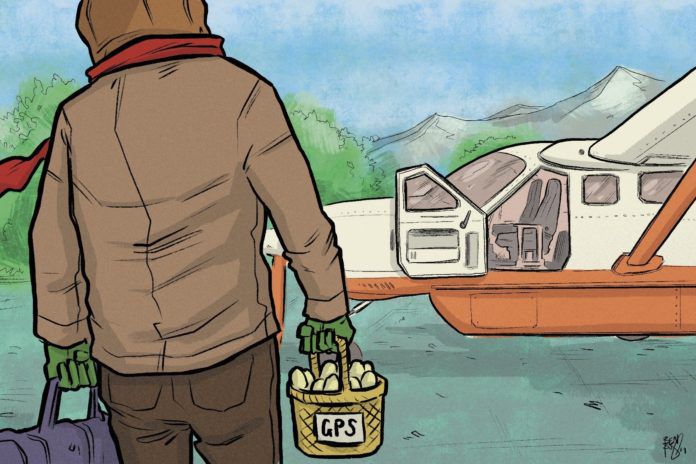 With modern avionics, such as Garmin, when you tune in a navaid (VOR, LOC, or anything with a Morse identifier), the box automatically decodes and displays the station identifier. Is it still necessary to confirm the Morse Code identifier before using the navaid? I’m pretty sure the answer is “no” but I can’t find it written in FAA publications.

Could you point me to the reference or relevant discussions?

First, we checked with Garmin and their equipment actually decodes the Morse code identifier rather than rely on GPS and the tuned frequency to look it up in the box’s database. So far, so good.We next checked with Mark Kolber, our regs guru, and he pointed us to AIM 1-1-3.c. That paragraph talks about navaid identification in general, pointing out that merely hearing Morse code isn’t enough because it could be transmitting “TEST.” Likewise, live voice transmissions from FSS or ATC don’t indicate a valid navigation signal.The prize, though, is in the paragraph’s last sentence, “If your equipment automatically decodes the identifier, it is not necessary to listen to the audio identification.”So, Rick, you’re right. If the box decodes and displays the Morse code identifier, you can rely on that.

I totally agree with the problem of relying solely on GPS. When the FAA made their decision based on the Johns Hopkins study, they completely ignored the part that said that it could be a problem if GPS was the primary source of navigation. The FAA must be thrilled to be getting rid of all those expensive VORs.

I also lament the decision to tear down LORAN because it was costing us $30M a year to operate. I talked with some engineers who made a good point. We had a bad opinion of LORAN, particularly in bad weather, but that was with 1970s electronics. With modern systems, the technology can get eight-meter accuracy.

With NextGen and the Minimum Operating Network ultimately needing a backup to GPS, leading to the possibly of relying on DME or even eLoran coming back into the picture, I’m not too thrilled about the prospect of having to put yet another—probably expensive—box in the panel just for backup.

I read your May Remarks, “Our Intermittent GPS Future,” and I had to write. I am with you.

I got my instrument rating back when we had to do DME arcs and ADF approaches. We’ve got it so easy these days with GPS and moving maps. My current plane is ADS-B compliant, but other than that, I have no GPS guidance outside of ForeFlight. I’m back to VOR/LOC/GS/DME/ADF for now, but I do plan an upgrade to include a modern GPS.

Perhaps someday we’ll have a multi-sensor box with GPS as primary and eLoran as backup.

We’ve discussed this. One of the backups to GPS that’s being considered beyond the Minimum Operating Network is, as you say, a LORAN-like system that will provide area navigation using a few far-flung ground stations. (But don’t think of our old LORAN-C boxes. The potential system uses the same general positioning math that LORAN did, and might have similar (low) frequencies, but the transmitter and in-box technology will be completely different.)However, that’s currently thought of as only a backup system. GPS will be the primary. My beef is that if the guv’mint keeps jamming and degrading GPS, which has gotten ever more frequent of late, the “backup” system will be used so often it’ll need to have the robustness and capability of a primary system. But, it’s not being planned for that.So, loss of GPS even with the backup, will still leave us with only ground-based approaches (LOC, ILS). And that means that it’s highly likely we won’t be able to get home; we’ll only be able to land safely somewhere else at an airport that still has those few approaches. —FB

How Far We Will Go

I was delighted to see Fred Simonds’ article, “How Far Can You Go?” in your June issue, in response to my recent letter to you. Thank you so much for commissioning the article from Mr. Simonds, and please convey my thanks to him for doing such a thorough job of dealing with my questions.

Right of Way in the Pattern

Jordan Miller’s excellent article, “Party in the Pattern,” in your April issue, discusses non-towered operations where there are “hotbeds of activity.”

One question that comes up often is the conflict on downwind with another aircraft on the 45-degree entry. If both airplanes will arrive at the same point in space at the same time, who has the legal right of way?

Of course, both pilots must avoid a collision, but does an aircraft already established in the pattern have a right to continue, expecting the newcomer to give way, or should the downwind aircraft make room since the entry airplane is converging from the right?

The regs, specifically 91.113, are not clear on this. First, 91.113(d) essentially says that same-category aircraft, in this case, fixed-wing airplanes, at nearly the same altitude, yield to the one on the right. However, 91.113(g) talks about landing aircraft and says that if two or more are approaching an airport for landing as is the specific case you’re describing, the lower aircraft has the right of way. Most of us tend to improperly enter a pattern a bit too high, so this would suggest that the airplane already on downwind has the right of way.But, most of those right-of-way rules add something about not pressing that advantage to cut out the other. Finally, 91.113(b) pretty much says to simply play nice.Here’s a personal, unofficial, non-regulatory take: Aircraft in a pattern tend to know where the traffic is, while a new arrival struggles to get the picture. Thus, it’s easier for the existing-pattern traffic to let in the newcomer. Also, in-pattern traffic tends to fly rather tight patterns, while the newcomer often flies a wider pattern, so he can fit more easily on that wider pattern. All this means that the guy already in the pattern should try to let in the new guy. If the new guy is indeed flying a wider pattern, just slither over to follow him so you don’t subsequently cut him off.Fred Simonds, our resident CFI with more dual given than most of the rest of the staff combined, has a different take:“In my opinion, the aircraft on the 45-degree entry should yield to established traffic in the pattern. The reasons are practical, not legal.“The purpose of the 45-degree entry is to help the entering pilot see traffic on downwind. It’s his/her responsibility to fit in with existing traffic. It also helps a pilot in the pattern see another aircraft entering the pattern ahead of him/her if they are both at pattern altitude.“I insist that my students always enter the pattern at the correct altitude. Descending in the pattern is a great way to squash someone below you. This has been beaten into me since I started flying.”So, as you can see, even we are divided on the answer. Of course, the bottom line is that it’s everybody’s responsibility to avoid a mishap.

I had a feeling of dj vu when I read “Upgrade Confusion” in the July issue. I recently struggled with many of the same budget-busting decisions.

I even considered your top shop choice, but due to their high cost and backlog, I continued looking. There are hundreds of fine shops around the country who aren’t quite as busy as the big-name shops, nor are they as expensive. I picked such a shop in Minden, NV, and am very satisfied with the results that you can see in the attached photo of my Mooney.

We read ’em all and try to answer most e-mail, but it can take a month or more. Please be sure to include your full name and location. Contact us at IFR@BelvoirPubs.

For address changes, please use the “Subscription Service” link, form or e-mail located in the back of this issue. For subscription or delivery problems contact customer_service@belvoir.com.