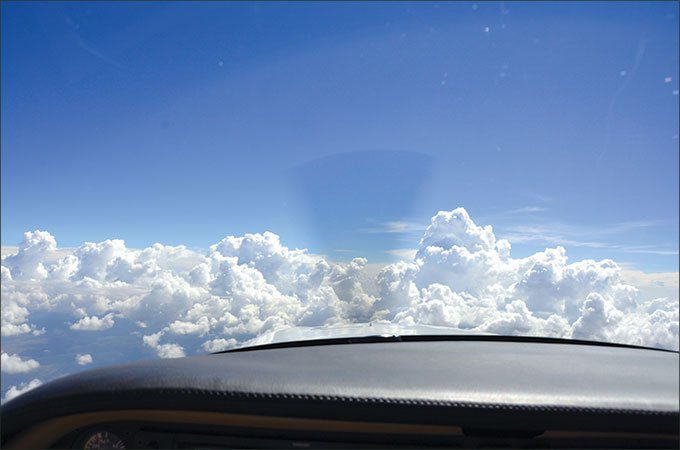 On Top…Of What, Where?
Thanks for Joe Shelton’s article on VFR-on-top operations in the August, 2013 issue. Your information was excellent and quite helpful.
I have found VFR-on-top very useful out here in the mountainous western U.S., where MEA’s are high and some bumpy cumulus buildups make flying uncomfortable or even impossible at IFR altitudes in my aircraft.
When in these conditions, I’m often under a scattered or broken cumulus layer, requesting VFR-on-top. I then have used hemispheric altitudes and assigned routing, but these are often below MEA’s, which are often governed by terrain well away from my route. My question concerns the legality of flying in good VFR conditions but below the MEA while VFR-on-top. I am easily able to avoid terrain with approved heading changes in visual conditions, so am comfortable doing this. What are your interpretations?

We’re unable to find any regulatory reference to altitudes required while VFR-on-top, other than the standard hemispheric VFR altitudes in 91.159. The controllers’ manual is similarly silent on the topic. AIM, however, states you must comply with certain IFR criteria, including “minimum IFR altitudes.”

Operating VFR-on-top below MEA certainly isn’t impossible, but some IFR protections would be good. So, at least consider flying at the MRA, MOCA or, on radar and above the minimum vectoring altitude (or Center’s equivalent, minimum IFR altitude) for that sector.

Good catch, Greg. In the author’s original manuscript this point wasn’t entirely clear, so in edit and layout it was made…worse. The basic point is that sometimes climbing to a VFR altitude can get you what you need without going all the way to an IFR altitude.

What’s In Your Tank?
The letter from Mr. Norris of Precise Flight, (IFR May, 2013), about breathing compressed air instead of oxygen, reminded me of an accident caused by that very thing.

If memory serves, it was a commercial mapping flight in a Cessna Skymaster. The aircraft was not pressurized and the crew, a pilot and a photographer, were breathing the on-board oxygen.

At least, they thought they were breathing oxygen. Turns out, the oxygen tanks had been filled with compressed air. Both crew members became hypoxic and passed out. The aircraft crashed. I don’t remember if the crew survived, but I remember the cause of the accident.

Nice Place To Visit
I started flying back in the late 1960s, and although I aced my written and had a solid primary instructor, I somehow missed the content in August’s “Well Structured ATC.”

It was a different world back then, with the altitudes of the southern skies filled with freight dogs delivering checks in Twin Beeches, doctors and dentists in their Twin Comanches and pilots like me renting Cessna 172s and Cherokees. Commuter operations were on a smaller scale back then, flying Aztecs and Apaches with an occasional Twin Otter.

That was a great, comprehensive article by Tarrance Kramer. Even though in the post 9-11 environment it sometimes takes a little longer to get appointments to visit the various ATC facilities, it’s something that every pilot should do to better understand how the “other half” lives. Thanks TK.

How Long Is the Hold?
I was surprised in September to see a lack of a response to Terrance Godar’s comment about the “California Let Down” 5 mile hold in lieu of a procedure turn. Mr. Godar took you to task for implying that “the depicted 5-mile legs could be disregarded.”

So, the depicted leg length on a distance hold is a maximum, just like the “remain within 10 nm” limitation appearing in most barbed procedure turns. Operationally though, it’s always a good idea to make sure you and ATC have similar expectations. So it’s probably the better practice to at least advise ATC that you plan to shorten the legs and see if that’s a problem.

CFII Godar’s point was that both the Instrument Flying Handbook and the AIM state that the HILPT should be flown to the leg lengths specified.
We’ve read the letter you reference and it does not explicitly apply—or not apply—to holds in lieu of a procedure turn, but it sounds as if it might be referring to assigned holds or those depicted en route or on arrivals and/or departures, not approaches. Lacking explicit guidance to the contrary, we’re going to accept reader Godar’s pointer to Handbook and AIM guidance.

That said, your point about clarifying any time you’re not completely certain is the best advice overall. When in doubt, ask what the controller wants or will accept.

VDA Dangers
The recent changes made to certain RNAV approaches by the FAA are shameful at best. Not only was a TERPS mistake made in the first place with approaches for which the VDA is not obstacle-free below MDA (which it should have been), but the correction was made virtually in secret, and takes away the very desirable vertical guidance in many cases. So, shame on them.

But, turning to the June, 2013 issue of IFR for clarity and understanding, I found little, if any, help at all. You guys are supposed to make it all clear. What I found was an acronym jungle with unexplained visual aids that left me as confused as before.

Why not simply raise the VDA a little so that obstacles below MDA are safely cleared. Maybe a little higher minimums, but still having the CDFA (acronym backatcha) option in play?

You may have a basic misunderstanding of how this all works.
If an approach provides guidance to…somewhere, the path to that somewhere is guaranteed obstacle-free within certain criteria. So, there are not going to be any obstacles between the FAF and the MDA along the prescribed path and altitudes. You’re safe.

However, the point we made across two articles was that if you choose to descend below MDA, the glideslope-like path that is a mathematical construct of your navigator is not necessarily going to be clear. It never has been.

he FAA evaluates each approach according to strict rules. In a nonprecision approach (to an MDA), the path is clear to the MDA. But, when you make it to MDA per 91.175 (b) (3) (c) you can only descend below MDA visually, without navigation guidance. For that reason, the path below MDA to the runway may or may not have the same obstacle protection as an approach that has a surveyed physical glidepath down to the runway.

We disagree with your premise that a VDA should have guaranteed clearance below MDA. Remember, these are nonprecision approaches that have no glidepath. The VDA (or a CDFA, if you’re certified to use one) is a mathematical construct to provide a constant rate of descent from the FAF to the MDA, not the runway.

Raising the VDA wouldn’t solve the problem of obstacles existing along the projected VDA between the MDA and the runway because there is no obstacle clearance surface associated with the VDA—remember, it’s a mathematical construct, not a surveyed slope.

We’re sorry you found the acronyms confusing. Unfortunately, those are the acronyms the FAA is using and we defined each of the new/uncommon ones. We certainly didn’t create any of our own.
Please include your name and location and send your comments, suggestions, corrections and questions to IFR@BelvoirPubs.com.