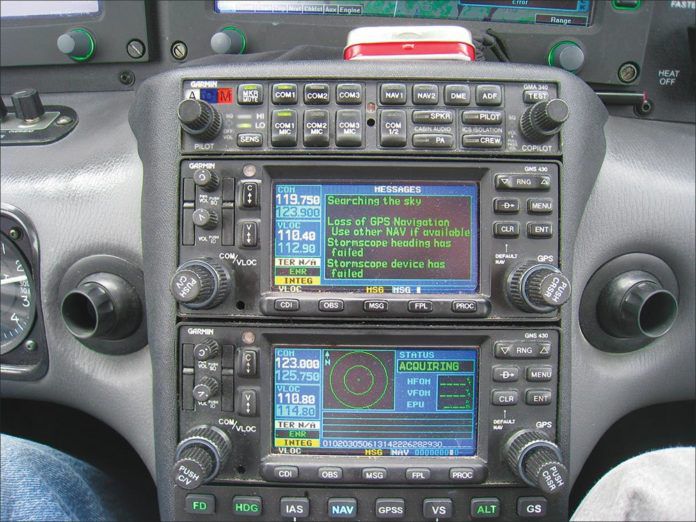 When More is Less
“Searching the Sky” in the July issue was a phenomenal article.
The cascading failures of this new technology are not well understood. With my G600, a pitot-static glitch, which in the good old days would have caused a barely-noticeable blip on my round VSI or ASI, now throws my ADC into re-compute mode and I lose my glass AI for about 10 seconds as the system crunches the bad data. The AI loss kicks off the autopilot and FD, and syn vis is gone from the PFD.

It is a lot to deal with on a low-IFR departure.

Gimme That Handheld Nav
On a recent IFR trip from San Diego to Sacramento filed on airways, when we checked in with the first NorCal controller north of Bakersfield, he asked if we had a handheld GPS available.

When we said we did we were cleared direct to Sacramento eliminating the need to follow the airways precisely. The contract was clear to both of us. We were in a radar environment, so the controllers could tell if we started to wander.

Moving Pictures
Jeff Van West’s article on NEXRAD imagery (Datalink Tips and Tricks, August 2012 IFR) was really good and correctly emphasized that this device is a look into the past, not an image of what you currently have to deal with. I live down here in South Florida where we have lots of quickly changing convective weather systems, I wouldn’t go anywhere without my big-screen NEXRAD displays but I also take this data with a lot of grains of salt.

One option that I like to use but I didn’t see commented on in the article is the use of the “animate” function. I derive some predictive value as I watch the radar images build and move across the screen. It lets me make a pretty good educated guess of the near future. I can see which way the weather systems have been building and moving, follow where the holes in the weather have been and where they are headed, and make early decisions regarding which side I want to deviate towards.

As I watch which way the weather is moving, I can tell ATC when I’m still up the coast where I want to go as I head south. If you tell them what you want to do ahead of time, I have always found ATC really helpful and they don’t try to steer me into weather that I don’t want to get involved with. It’s still a look at the past but the moving composite of several past images has been a reliable indicator for me of what I am likely to face as the flight progresses.

The Ol’ Switcheroo
I would have never thought of this, but I was attending an airport meeting and a controller from Troutdale, Ore., suggested using the Portland, Ore., Rwy 7 ILS approach to descend through an overcast and transition to Troutdale, which is nine miles to the east.

The main reason that the controller at Troutdale mentioned this was that even though Troutdale has an NDB approach, arrivals at Portland International have to be curtailed when an aircraft is using the NDB approach. What a shame.

While this technique has become less common with more GPS approaches to more airports, it’s still a perfectly valid way to get in. The one thing that must be crystal clear is that you can’t start one instrument approach and then “hop over” to complete a second one at another airport. Not still under IFR, anyway.

When you break off the approach to Airport A, you cancel IFR and fly VFR to Airport B. You could still track an instrument approach procedure and stay VMC, but you’re not flying IFR anymore.

It would be a good technique for Bandon State. In fact, this is a much more common way to use the procedure: breaking off an approach to one airport to fly visually to an airport that has no instrument approach at all. Use whatever approach is best for your direction of arrival, because you don’t care so much for the landing runway. The RNAV or ILS to Runway 4 puts you closest to Bandon early in the approach, in case you breakout early and see it below you. That could save time coming back down the coast, all else being equal.

You can also file IFR to Bandon State even though it has no instrument approach. You’ll only be able to descend to minimum vectoring altitude, which might not be low enough if radar coverage on the coast is poor. You can also descend to the MEA or OROCA as appropriate. But this could save a step if ceilings are high enough at Bandon.

Garmin’s GDL 39
I have a Cherokee Six with a Garmin 496 and an iPad with ForeFlight. I want to get an ADS-B receiver. The Garmin unit looks good because the weather could be routed to the 496, but I don’t think their unit talks with ForeFlight. The Stratus/ForeFlight unit looks good but I don’t think weather can be routed to the 496. Your thoughts?
Keep up the informative articles.

I just watched your GDL 39 video and have a question:

When used with Garmin’s Pilot App is the radar static, like in ForeFlight using Stratus, or are you able to see radar in motion? I find motion very helpful for predicting where a build-up or line will be in the future.

The Garmin GDL 39 ADS-B receiver only works with Garmin’s Pilot app on the iPad, so you can’t (yet) use it to send weather and traffic to ForeFlight. Also, the integration with the 496 is traffic only. You’d still need XM for weather on the 496. Also, we think ADS-B traffic is next to useless unless you have an ADS-B Out transponder.

As far as we know, none of the ADS-B weather solutions for the iPad animate NEXRAD. It’s possible some will add this feature, storing older NEXRAD images for animation. But the official FAA product is static.

Cutting Edge as an NDB
Kinda funny opening of your Remarks in the August issue: “… only one newsprint periodical I still read on real newsprint.”

Really? While there are lots of reasons to explain your switch from printed versions, why is your magazine—the best aviation publication I receive—so far behind on this front? I’m not sure if IFR is a “newsprint periodical,” but that’s not the point. From being able to read an issue on an iPad, to being able to look up old issues online, I miss many aspects of a digital version.
If you don’t like print versions of periodicals any more, why should we?

We know. We’re working on it. But the editorial staff here has no control over the options for issue delivery. Keep the requests coming; we’ll keep passing them along.

Send your thoughts to ifr@belvoirpubs.com.