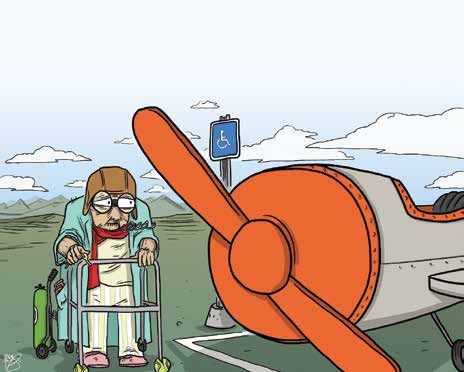 I read your reply, “That’s Just Some Clouds” in August, to a letter stating an alternate was not required because the forecast of 1800 scattered at a nearby Class C airport doesn’t constitute a ceiling. I agree with that but my CFII says if your destination airport doesn’t have a TAF, you must file an alternate even if there’s a TAF 10 miles away predicting VFR weather. Is he wrong?

Larry, you ask a simple question, but like so many seemingly “simple” questions about the regs, there can be a lot of nuance and depth in exploring the answer.

Right off the bat, (a) says that you’ve got to file an alternate. Okay, but then (b) says you don’t have to file that alternate if the airport has an instrument approach, and “Appropriate weather reports or weather forecasts, or a combination of them indicate that” … (2)(i) “For at least 1 hour before and for 1 hour after the estimated time of arrival, the ceiling will be at least 2,000 feet above the airport elevation and the visibility will be at least 3 statute miles.”

First, the airport in question, KXLL, does have instrument approaches. That answers the original question of why 1800 scattered doesn’t require the alternate. But, let’s dig deeper into the implications of all this. The two real questions are what constitutes, “Appropriate weather reports or weather forecasts” and what do “ceiling will be” and “visibility will be” mean. In other words, how you predict that the weather will be at least 2000-3?

(Thanks to Mark Kolber, our regs guru, for helping assemble this answer.)

First, we’ve seen nothing official from a regulatory standpoint, so the pilot is left to define “will be” using logical and reasonable choices. Note, however, that if a forecast states that there’s even a small possibility that the weather might be below 2000-3, that’s not the same as saying it will be above 2000/3. In other words, “might not be below” or even “probably won’t be below” doesn’t translate to “will be above.”

What’s a good weather source to predict if the weather will be at least 2000-3? In terms of aviation-specific products, the two that fit the bill in the past were the TAF and the FA (Area Forecast), but we don’t recall anything saying that was an exclusive list. Clearly, if the airport has a TAF, you’re covered. But, lacking a TAF is not a disqualifier (contradicting your CFII). The FAA and NWS specifically said the FA was being discontinued because it was of little value in a digital age when the NWS had far more sophisticated and accurate products. This clearly suggests that non-FAA weather products are acceptable.

The obvious first choice is the NWS GFA tool (which many refer to as the FA’s direct replacement). Backing that up would likely include any NWS forecast products that drill down to levels of ceiling and visibility on a timeline. Even third-party products that use that data are probably “appropriate,” if they have sufficient detail. But for those who want to play it safe, it’s the TAF and GFA. (Personally, we make extensive use of the MOS even when there is also a TAF. See “Hidden Weather Tool” in March 2018, “More MOS” in June 2018, and “Better Than TAF?” in June 2019.) It’s kind of like weather briefings in general—there’s no such thing as a “legal” briefing. The only question is whether the source is reliable and it provides the needed information.

To summarize, then, §91.169 (a) says you’ve got to file an alternate, unless (b) there’s an instrument approach (b)(1) and “appropriate weather reports or weather forecasts,”—which we interpret as being from reliable sources that provide sufficient detail—predict that the weather will unequivocally be at least 2000/3 (b)(2)(i).

Thanks for the question, Larry, and we hope this resulting discussion helps clarify some common misunderstandings.

Put That To Good Use

I have been reading IFR for years and am grateful for all it has taught me. Although I don’t yet have that elusive instrument rating. I’ve gleaned valuable information, most recently Elaine Kauh’s article, “Lake-Crossing IFR” in your August issue.

On my way to Oshkosh for the EAA AirVenture this past July, I contemplated crossing Lakes Erie as well as Lake Michigan from my home base in Montgomery, New York. I was flying single-pilot VFR in my Comanche 180. Not only was it hazy due to weather; it was smoky due to wildfires in the West. Still, it was tempting to try to cross.

There was a band of bad weather approaching Wisconsin and I wanted to beat it in. If I had to fly around Chicago, I’d lose valuable time. As I was refueling in Kalamazoo, Michigan, a lineman told me about the Chicago Flyway. I could stay low in VFR conditions and fly Lake Michigan’s shoreline around the east side of Chicago.

Not only did it save time, but your article illustrated that it might have saved me from a harrowing experience. The Chicago Flyway was one of the most breathtaking flights I’ve ever taken. Next time I go to Oshkosh, I intend to have my instrument ticket and venture over Lake Michigan, keeping Ms. Kauh’s great advice in mind. But I’ll also remember that if I need to take a little more time and go VFR, it just might be a safer and stunningly beautiful option.

Thanks again for your publication!

The August Remarks resonated with me. It’s sad that cultural ethics have dipped so low as to require, “Trust; but verify.” That phrase was used by President Reagan to describe our dealings with Communist Russia when lying was acceptable political expression.

I have always felt that in the field of aviation, lack of trust and being dishonest often leads to death. We know this. In instrument meteorological conditions, a pilot “trusts” his instruments or likely dies. We trust air traffic control to keep us separated when flying. So in aviation, trust is of paramount importance or we die.

Not being honest has its consequences as well. Choosing to ignore a mechanical problem or weather prognostics or a medical condition that impacts flight is a form of being dishonest.

So thank you Frank, for pointing this out. A culture of believing that there is no absolute truth, truth is relative, or it is okay as long as you don’t get caught, can kill when applied to aviation.

May we return to a culture where, as J.C. Watts said, we “Do the right thing when no one is looking.” He also said, “There are too many people who think that the only thing that’s right is to get by, and they only think wrong is to get caught.” This applies to the part owner of the aviation shop where you were burned by a new manager.

Thank you for your great publication. I have read it for many years and look forward to receiving it each month.

When Must I Retire?

In your July issue, the article “Too Old To Fly?” said, “More recently, the FAA reauthorization bill specifies a mandatory retirement age of 70 for pilots in large Part 135 and Part 91K operations.”

Can you provide any more detail?

We asked Bob Teter, the author, to dig into this for us and he replied:

While that most recent FAA reauthorization bill was being debated, a last-minute provision was slipped into the legislation by Rep. Bill Shuster that would have required pilots for fractional giant NetJets to retire at age 65, the same age as airline pilots. An alternative provision by Rep. Bob Gibbs created a requirement for a mandatory pilot-retirement age at 70 that then had the backing of both NetJets and its pilot union.

While the legislation didn’t specify NetJets, the mandate would have applied to pilots at Part 135 and 91K operators that perform at least 150,000 turbojet operations in a calendar year. NetJets is the only operator that performs that many operations a year. Neither provision made it through to the final law. However, independently, NetJets management adopted the age 70 mandatory pilot-retirement provision. It was estimated to potentially affect approximately 75 NetJets pilots, but ultimately the NetJets union never endorsed the change. So at present, NetJets has no mandatory retirement age.

Meanwhile, SEC. 315 requires the Administrator to convene an aviation rulemaking committee to review and develop findings and recommendations regarding pilot rest and duty rules under Part 135.

The September weather article, “Tropical Weather,” talks about the Intertropical Convergence Zone spawning thunderstorms in western Africa. It says those thunderstorms can kick up a vast amount of dust that is carried to the Caribbean and east into Central America. Uh, shouldn’t that be west?