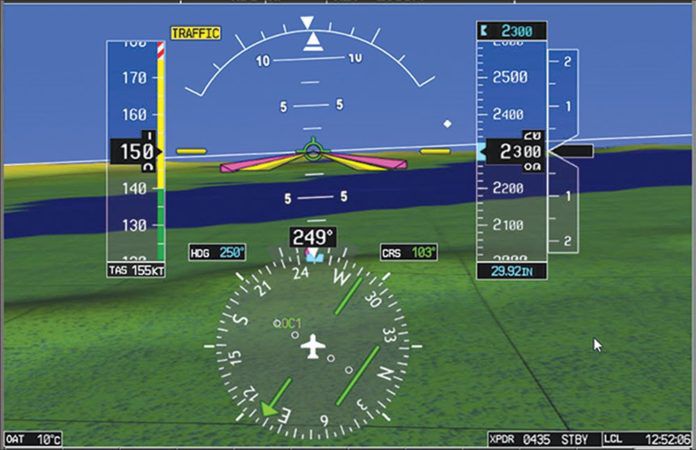 Situational Awarelessness
Frank Bowlin may have a misunderstanding of how the CDI needle works while the HSI is using LOC signals.

In “Save a Botched Approach” in the July, 2012 IFR, he states that the captain “…had a good intercept angle, but the needle just would not come in” and he only had to correctly set the HSI course for it to work. The CDI behavior on an ILS approach is unaffected by the OBS whether it is an HSI or a standard VOR/LOC indicator.

I could have worded that better to prevent a misunderstanding. Obviously, the D-Bar (CDI) is unaffected by the OBS when you’re tuned to a localizer, but your situational awareness can sure get mucked up if you get it wrong. Consider an extreme case:

My captain that day certainly didn’t make as significant an error as 180 degrees. But it was enough to make it look like he had a good intercept while in fact he was flying away from the course. When he corrected his OBS, he had that “ah hah!” moment of proper situational awareness and turned to a real intercept heading.

I’ll add that the point wasn’t to rag on my captain. We all make mistakes and this one is both easy to make and potentially highly disorienting.

Whither Thou ICAO?
With upcoming changes to ICAO flight plans on the horizon, I am trying to recall if anyone has published an article on these in general as we are being steered this route more and more (RNAV SIDS, STARS).

As a long time subscriber, I was wondering if an article might be dedicated to the ICAO flight plan form.

You’re right about these changes and no, we haven’t covered them yet. We’ve put that topic into the mix for a future article. Thanks for the request. Keep ‘em comin’.

Why No ODP?
Another instructor and I noticed that a nearby airport (5R4) had an obstacle departure due to antennas north of the field while our base airport (KCQF) did not in spite of even larger antennas. I think we found the answer in that the antennas north of us are 2 miles further away, taking them out of the 40:1 ratio.

We could not figure out why KCQF has the “T” notation. The only obstacle mentioned is a note about trees on the end of the runway and there’s no ODP.

We asked Lee Smith, one of our resident TERPSters, about this and he replied:

The “T” notation is on the approach to refer you to the note about the trees in the A/FD. CQF doesn’t have takeoff minimums or an ODP because its 40:1 obstruction clearance (which is evaluated all around the runway, not just off the departure end) is not penetrated. The trees are a low, close-in obstacle. These are excluded from consideration so you won’t have a non-standard climb gradient to an altitude less than 200 feet above the departure end of the runway.

5R4 has a published climb gradient because something (probably the towers) exceeds the 40:1 surface. The gradient/altitude is published to ensure the pilot has the required obstacle clearance. The procedure has a visual climb over airport (VCOA) to mitigate the non-standard climb gradient when the controlling obstacle is more than 3nm from the departure end of runway. The published ceiling and visibility are based on the 40:1 surface from the edge of the visual climb area.

Where’s the Runway?
Yesterday I flew the ILS-28 to KAGC. When I broke out, I was clearly tracking left of the runway, maybe 100 feet or so, but all indications were I was tracking exactly on the localizer and glideslope. I disconnected the autopilot and lined up properly with the runway.

I asked the Tower, “Hey is this localizer lined up with the runway?”
The Tower answered, “No, it’s offset left.” I went back and looked at the chart and nothing suggests it should be left of the runway.

Both the FAA and Jepp charts show the localizer offset in the localizer frequency box on the plan view. We again leaned on TERPSter Lee Smith, for the details:

“For procedures with vertical guidance, an ILS specifically, the localizer is considered aligned with the runway if the course is within 0.03 degrees of the runway centerline. For differences greater than 0.03 degrees and up to 3.00 degrees, the offset is charted as you see on this approach.

“For procedures without vertical guidance, a localizer is considered aligned, and is identified as a localizer, with up to 3.00 degrees offset from the runway. Greater than 3.00 degrees, and up to 30 degrees, it’s identified as a straight-in LDA. More than 30 degrees and it’s a circling only LDA. The offset value is not charted for these localizer procedures without vertical guidance.”

We rely on course corrections and vectors from readers to guide this magazine to its destination. Please send your comments, questions and suggestions, with a subject containing “Readback,” to ifr@belvoirpubs.com. Please include your location.