I rarely clog the radio frequency with unimportant chatter, but this was a very special day. It was March 19, 2015 when I completed my IFR checkride successfully. I was filled with excitement and gratitude as I reflected on hours of study and flight training with a fantastic instructor who, in the process, became a good friend. It was an extremely rewarding experience!

On the flight back after my checkride, the frequency at my home base, Solberg-Hunterdon Airport, was silent. I flew the standard pattern announcing my position as usual, until turning final when I pressed the mic and proudly said, ‘’Solberg traffic, Skyhawk turning final 22, Solberg. And you’re listening to someone who just passed his IFR check ride.”

I was just throwing it out there to the silent universe and living in the moment. I was shocked when I heard my instructor’s voice on the CTAF say, “Nick, I knew you could do it! Great job!”

He was inbound with another student about to announce his position and heard me on the frequency. I pressed the mic one last time and said, “Thank you so much Tom! I couldn’t have done it without you! You’re the best!”

I was driving to my hangar at Manchester Airport one really nasty, windy and turbulent day. I had no plans to actually fly. I overheard, and coincidentally was able to watch, a Mitsubishi MU-2 land on Runway 35. You could see him wrestling with the wind all the way in. I was listening to Live ATC, and heard the following exchange after he landed:

Manchester Tower: “I was just going to ask, say ride on final.”

Mitsubishi 60KC: “Yeah, occasional, and ah, we had about 20 knots coming down final.”

There was a long pause, and then:

Mitsubishi 60KC: “Other than that, not bad!”

Early on a quiet morning, as I was taxiing, a rather over-eager student pilot called ground control. A young voice, with textbook radio language, and a perfectly articulated request to taxi from the flight school ramp. The seasoned controller just could not resist: “Cessna 123 alpha bravo, you will have to hold for about 30 minutes as we need to finish our breakfast.”

There was a long pause, as the student clearly hadn’t been trained for this possibility. The controller made him sweat for a perfect number of seconds before saying: “It’s okay Cessna three alpha bravo, you can taxi to Runway 35.”

Many chuckles on frequency, as everyone appreciated hearing a little humor from our local tower.

Saw this PIREP (below) on a recent flight with ForeFlight. 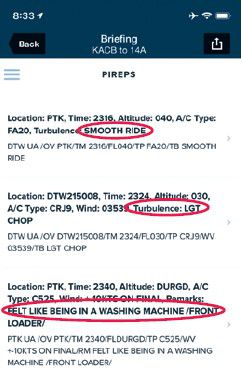 Please send us your cleverest or most embarrassing moment on the radio—or your favorite fix names or airport names—with a subject of “OTA,” to IFR@BelvoirPubs.com. Be sure to include your full name and location.