Before BMW started to produce cars, it manufactured motorcycles then aircraft engines that powered a number of well-known German airplanes such as the Focke-Wulf FW 190. In the BIMMR TWO DEPARTURE from the Greenville-Spartanburg International airport (KGSP), DRIVN around Greer in the South Carolina Upstate in your BIMMR ZZCAR (BMW Z Car), you can stop by the BMW ZNTRM (Zentrum) visitor center next to its US factory. However, let’s not be too acerbic (ACERB) by confusing a Bimmer (car) from a Beemer (motorcycle) and much less a Beeser (BSA motorcycle).

We were departing Boeing Field (KBFI) in Seattle talking to Seattle Approach. I was working the radios while my husband was flying our Phenom 300, when the following exchange took place.

I was flying home during the COVID-19 pandemic, when the following took place:

Me: “Only 2 passengers and they still don’t have enough leg room!”

Of course, Spirit Airlines is a discount carrier famous for their terrible seat pitch

A few years ago my wife and I were scooting along in our
1973 Cessna 182 from Visalia, California (KVIS) back home to Hubbard, Oregon (7S9) at 10,500 in VFR conditions. We were enjoying the ride having passed Mount Lassen on our right and Shasta Lake on our left, when Center called:

Oakland Center: “Well, that explains that!”

We were following the Lake Ontario shoreline north toward Billy Bishop Toronto City airport on Toronto Island near downtown Toronto. On frequency we heard the following.

I love the KOHOE arrival into Denver. In fact, I even took a photo of our FMS showing my favorite fix sequence. 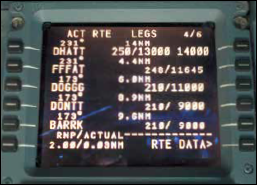