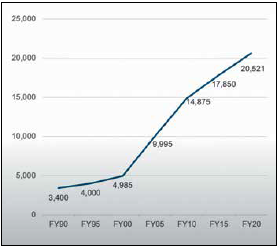 Still carrying a chart case with leather binders of paper approach plates? Your back probably tells you that the FAA has been issuing Instrument Flight Procedures (IFPs) at a phenomenal rate. The iPads, electronic tablets, and FMS Data Bases have masked the explosion of IFPs. However, the FAA is targeting the elimination of underutilized procedures through FAA Order 8260.43C and the resulting IFP Optimization program.

At the turn of this century, there were approximately 5000 published IFPs. Since then, the IFPs have more than quadrupled to over 21,000. IFPs are not just approaches, but all procedures in the airport terminal airspace, including Standard Instrument Departures (SID), Standard Terminal Arrival Routes (STAR), and Instrument Approach Procedures (IAP). In the pre-FMS/RNAV era, new instrument flight procedures were normally added only when a new ground-based navaid was installed. The addition of a new ILS or nearby VOR would add a new approach to the served airport. With the advent of RNAV and GPS equipment in the cockpit, approaches are added without building new ground stations.

The first influx of new procedures started with RNAV approaches. The first Flight Management Systems (FMS) in the Boeing 767 and 757 and the Gulfstream G-IV and Falcon 900 business jets blended DME/DME or VOR/DME position with the Inertial Reference System (IRS) position. The Kalman filters that were used complemented the short-term accuracy of the IRS with the long-term accuracy of DME-based positions. Until GPS, this provided accuracy good enough for non-precision LNAV and Baro VNAV approaches. Over time this evolved into Required Navigational Performance (RNP) that allowed lower minimums if the actual navigational performance (ANP) supported it.

Once the GPS constellation was fully operational in 1995, navigational accuracy made a stepped improvement. GPS provided both short- and long-term accuracy. The elimination of selective availability in 2000 and the implementation of the Wide Area Augmentation System (WAAS) a few years later changed the game again by providing accuracy that was originally envisioned only for the military. RNP morphed into Performance-Based Navigation (PBN) which is the backbone of the National Airspace System (NAS) modernization effort. Independent software monitoring determines the allowable LPV, LP, or LNAV/VNAV approach category based on the satellite geometry and WAAS availability. 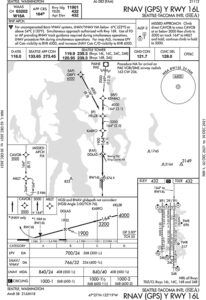 A step forward in getting the situation under control is the elimination of an additional 224 VOR, VORTAC, and VOR/DME stations in the FAA’s VOR Minimal Operational Network (MON) program. Also, 150 Non-directional Beacons are slated for decommissioning. As of November 23, 2021, there were 1291 ILS procedures and 4833 WAAS-enabled LVP/LP procedures. Decommissioning of Instrument Landing Systems in favor of LVP/LP procedures (ILS Rationalization) was being actively pursued, but that effort has been placed on hold, as announced by the FAA at the Navigation Programs Update Meeting in September 2020. ILS Rationalization is expected to be on hold for the foreseeable future.

The FAA is aware that it can become overly reliant on satellite-based navigation. The issue is a hostile power or other situation could disable the GPS constellation and hinder military as well as civilian air navigation. The FAA is trying to maintain a balance that will continue to provide adequate ground-based navigation in case of an issue with GPS coverage.

The proliferation of procedures has had an impact on the FAA’s budget and their ability to focus resources on newer issues such as unmanned aerial vehicles and commercial space operations. Part of the expense is because the IFPs need to be flight-checked approximately every 18 months. The increased number of IFPs has also increased the number of NOTAMs that have to be issued when there is a problem with the procedure. Ground-based navaid procedures cost more to maintain and generate than space-based (GPS) procedures. An issue that compounds the proliferation problem is a reluctance to eliminate any of the old approaches while at the same time adding new RNAV, GPS, and ILS approaches. The FAA has estimated that system-wide, 20 percent of the IFPs are redundant or underutilized with little or no benefit.

What are the benefits to pilots? Elimination of little-used procedures will enhance safety and reduce pilot workload by not having to sort through unused/underutilized approaches. It reduces the chance of error in selecting the incorrect approach. Safety will be enhanced by reducing the probability of overlooking important NOTAMs due to having to scan all those on little-used procedures. “Chart clutter” will be reduced and it will reduce the time it takes to load navigational database updates. Of course, it helps U.S. taxpayers by not having to maintain unused procedures. 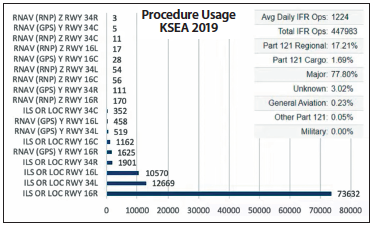 The rollout will be a national effort executed regionally, initially focusing on 30 core airports. The U.S. is divided into nine regions, subdividing the Eastern, Central, and Western Service Areas. Every instrument procedure will be reviewed, and priority will be given to safety.

Today at some airports you will see RNAV (RNP) and RNAV (GPS) to the same runway. Usually, the RNP approach was developed considering the FMSes in the airline/heavy-iron business jets that required training. Hence, “Authorization Required.” The RNAV (GPS) approach was added later. As with most examples, there are always exceptions, and this should not be considered a standard. Seattle-Tacoma (KSEA) is an airport that has both an RNAV (RNP) and RNAV (GPS) approach to the same runway—Runway 16L (on previous page). In this case, the RNAV (GPS) has lower minimums. It is also an RNAV (RNP) approach that is slated for elimination.

The table above shows all the instrument approaches into KSEA and the number of times each approach was used in 2019. It illustrates how few times some of the approaches were flown and why an optimization effort can be beneficial.

The Flight Procedure Specialists will look at the IFP and determine if it is a candidate for elimination. Once they make their recommendations, the task will go to the IFP Validation Team. The team evaluates all candidates within the service area to create a priority category list for the national IFP Prioritization Team. The IFP Prioritization Team merges the list of procedures to be eliminated with the list of new validated procedures to be added to generate an IFP production schedule. Finally, there is an IFP Oversight Committee to ensure the policies and practices of the subordinate FAA teams maintain and support the NAS goals.

Insight into what is under consideration for elimination, and your ability to provide input is available through the IFP Information Gateway. The FAA is seeking input before they eliminate an IFP. A procedure that is used for training purposes may allow it to escape the chopping block. If a procedure is not being used, is the problem because the procedure doesn’t work well for the controllers or is it that the equipment is outdated? The IFP reduction goes hand in hand with the reduction of VOR and NDB’s. The program has a target of reducing the number of ground-based navaids by 30 percent by 2030.

The FAA’s IFP Information Gateway is a real gem. It is a source for charts, IFP inquires, flexible searches and it allows you to be notified of new procedures, modifications, and IFPs being considered for elimination. I even used the website recently to pull up the current Kansas City Sectional. Rather than paying for a chart for one-time desk use, it was an ideal solution. I could even scale it to read the small print.

The FAA has developed a great tool that shouldn’t be overlooked. The gateway is accessible on www.faa.gov. Navigate to Air Traffic → Flight Information → Aeronautical Information Services → Instrument Flight Procedures Gateway. There’s even an instructional video on how to use the IFP Information Gateway. You can sign up for IFP Notifications for changes in your area or other areas of interest. It’s also your portal into what the FAA is doing to eliminate but also add instrument approaches. It is a little tricky to navigate but well worth the effort. 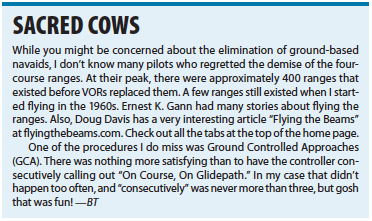