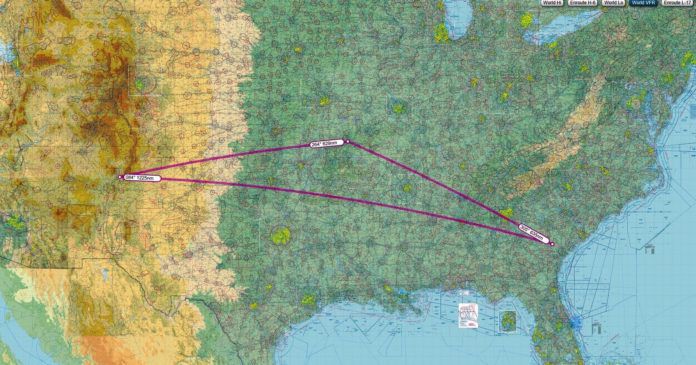 Once again it was time to visit the Southeast U.S. I’m preaching to the choir here, but I’m repeatedly struck by the usefulness and capability of flying general aviation, and this trip was another prime example.

I’d watched the developing December weather patterns and expected poor weather. But, the forecast for departure was clear skies. As a bonus, our flight out at FL210 experienced up to 100 knots of tailwind. Wahoooo! We made the 1240 nautical-mile trip nonstop in about 4:30 hours. What a rush!

However, being old and wise (uh huh…), I’d seen this movie and expected to fly at the treetops on the way home to get headwinds under 50 knots. Pleasantly, the forecast headwinds for our return were only around 20 knots at FL200. That was the good news.

The bad news, of course, was the other changes that reduced those winds. Most of the Southeastern U.S. was experiencing what the TV weather folks called an arctic superstorm with widespread snow and freezing rain.

I could fly above the worst of that, but headed west we’d need a fuel stop. Now, I trust the near-all-weather capability of my airplane, perhaps more than I should, but descending through freezing rain and snow, and then climbing back through it were activities I’d rather avoid. A new route was needed.

After a thorough analysis of the forecasts and available routes, balanced against cheaper avgas, I planned our flight via Springfield, Missouri, for the fuel and bio stop. This took us just north of the “superstorm” so we never even needed the de-ice boots.

If this self-congratulatory expos ended here, it’s just a tale that might or might not be interesting (or simply boring). But, the takeaway is that with reasonable care and planning, even in bad conditions, a general aviation flight can be conducted safely and efficiently. Let’s look at some numbers.

Our outbound trip was about 1240 miles and took us about 4:30. Our return was 1285 miles and took about eight hours of flying. Add the half-hour fuel stop and we were at 8:30. This made about 13 hours total flying.

This actually compares favorably with traveling by airline before accounting for delays, uncertainty, and stress of travel, especially on our return. Add in the inevitable vagaries of TSA, and, well, for me the trip was just a lot more fun and enjoyable flying GA.

Yes, this is a self-serving analysis. Nonetheless, the comparable time, the convenience, flexibility, and improved certainty wrapped in a more pleasant experience give me yet another reason to celebrate being a pilot.