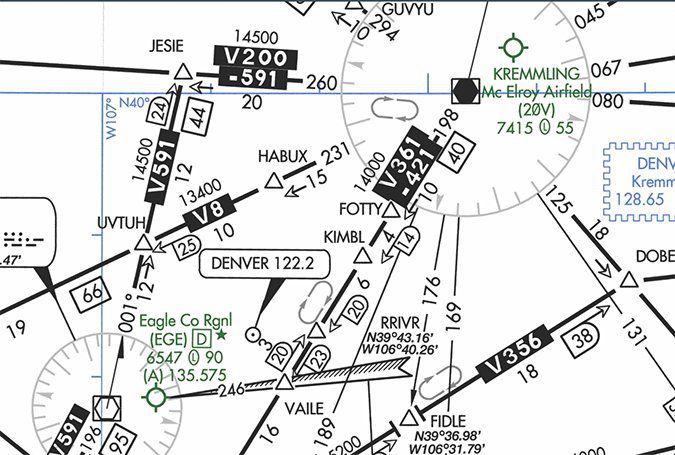 What is it about Colorado ski towns and their bizarre approaches? Oh yeah—the mountains. A great example is the LDA/DME Runway 25 into Eagle, Colorado (KEGE). Like many mountain approaches, the TERPS wizards did the bestsTA they could given the uncompromising nature of steep granite walls. The result is more bridge between enroute IFR and a marginal VFR arrival than an approach right to the pavement.

It’s the visual part that gets messy.

The Missed Starts Where?

Step one with this chart review is boning up on the whole Localizer Directional Aid (LDA) concept. Remember that every localizer is custom, and the width of the beam is adjusted so full-scale deflection is about 700 feet at the threshold. Because the antenna is at the departure end, this means localizers on longer runways are actually narrower (and more challenging to fly) than shorter runways. Your favorite ILS could be anywhere from three to six degrees wide.

LDAs are localizers, but often not placed on the far end of the runway. They get placed as needed to create a precise course on which the pilot can descend to reach a point in space. From there, he or she can find a runway and land. Placement and width of LDAs are dictated by the geography. They’re almost always fixed at three or six degrees, though.

I don’t know where the KEGE localizer resides, or how wide it is, but the chart shows it brings you aligned with Runway 25. The approach starts high and requires several step-downs, so you’ll need DME off the localizer, or IFR GPS equivalent. (As an aside, you can’t substitute even WAAS GPS for lateral guidance on this approach. You must fly the localizer needle by regulation.)

This LDA is unusual in that it has a glideslope like an ILS, which optionally gives you an extra 300 feet of descent—but requires an extra half-mile of visibility. More on that in a moment.

The descent is steep: 3.8 degrees as shown on the right of the profile view. Note this is steeper than the 3.00-degree PAPI on the right side of the threshold. You’ll see all white PAPI lights if you follow the glideslope to the runway and that alone deserves a thorough review.

Seeing the runway is the key, and what’s most unusual—and confusing—about this approach. Suppose it’s daytime, and the visibility is three miles. You fly the LDA/GS down to the DA of 8330. It is a DA, just like an ILS, so if you’re IMC you go missed right then.

If you break out perfectly centered on glidepath, you’ll be 4.3 miles from the threshold: “For LDA/GS, fly visual to airport 246 – 4.3 NM.” This is a charted visual segment, like we described in “Scud Running and RNAV Approaches” in May.

So, you can’t see the airport yet. That’s exactly what charted visual segments are for. Unlike a DA or MAP where you must have the runway environment in sight, you can proceed to the airport even though you can’t see it yet, so long as you can see three miles ahead. However, you better be sure you can find the airport if you drive on at 8330 feet, because every second takes you further out of missed-approach protection.

The visual segment appears in the profile and plan views as a dashed line. But don’t be fooled by the missed approach path going below that dashed line. This dashed line is the lowest you can go, and it starts 4.3 miles out.

So what gives with that lower-looking missed approach? That’s for the LDA-only approach, which has a MAP at CIPKU. But that MDA is 8620—higher than the visual segment altitude.

The problem is precedent. When ILS approaches are co-charted with localizer-only approaches, showing the missed from the localizer-only MAP works fine. The position of the ILS DA and the localizer MAP are so close it simply doesn’t matter visually. Here they’re 2.3 miles apart. The folks in Oke City agree it’s confusing, but they’re bound by the rules as written. There’s no convention for this. I could suggest some, but they never invite me to the meetings.

Just realize that from CIPKU at 2000 feet AGL, it’s roughly a 10-degree descent to the threshold. With 9000 feet of runway and a good headwind, that might be OK, even at 6500 feet MSL. Or it might mean your airplane leaves Eagle on a truck. Caveat emptor. Oh, and no circling option exists.

If it’s night, the notes show you need five miles of visibility for the LDA/GS. Essentially, you need to see the airport when you reach DA. So the higher minimum but lower visibility of the LDA-only version could be even more useful.

In either case, know that the PAPI won’t guarantee obstacle clearance until four miles from the field, and the Chart Supplement (A/FD) notes the PAPI isn’t visible beyond three degrees left of course due to terrain. It’s always worth verifying VGSI limitations for an unfamiliar airport. The Supplement discourages night ops by visitors entirely, in fact.

This approach has assumption gotchas at the beginning and end as well. There’s no procedure turn, so the approach must start at VOAXA unless you can get vectors. There’s a hold there, which could be handy to turn around safely, but the only real connection to the enroute structure here is the Kremmling VOR (RLG).

The enroute chart shows what looks like the same hold and intersection with the Eagle localizer on V361. But look closer: The approach uses the localizer and R-184 from RLG; V361 uses R-198.

Because of, you know, the rocks.

Jeff Van West learned to fly in Colorado. He misses the beautiful vistas on sunny summer days, but not the gut-sinking uneasiness of nearby mountains in night or IMC.