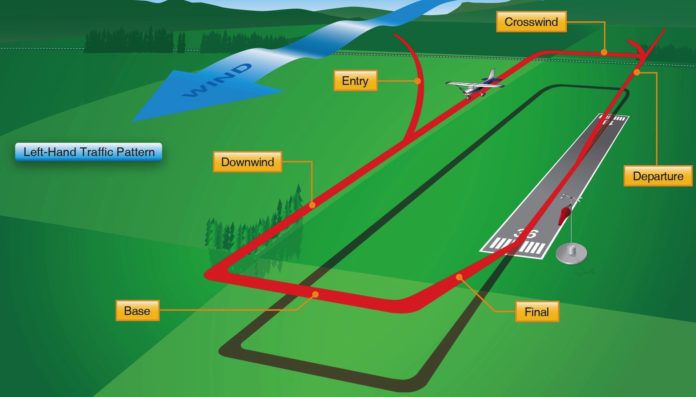 Likely you either practice approaches to non-towered airports or fly into airfields with part-time control towers. Non-towered airports, hotbeds of GA activities, present our greatest risk of a midair collision; a risk mitigated by a “disciplined adherence to procedures (proper entry into landing patterns, proper departure patterns) and proper use of the UNICOM frequency at uncontrolled airports.” (FAA Aviation News, May/June 2001) Therefore, it’s important that instrument pilots play nice around the pattern. The updated AC 90-66 covering non-towered airports specifically identifies instrument pilots, maybe because of some past misbehavior.

Default left turns, tiered altitude structure (500-foot helicopter, 1000-foot standard, and 1500-foot large aircraft pattern) and the basic box shape of a traffic pattern haven’t changed in decades. Yet there is a surprising amount of dispute on what the lines of a pattern are actually called. The AIM defines a departure leg as the “flight path which begins after takeoff and continues straight ahead along the extended runway centerline.” (4-3-2 c. 6.) This diverges from the explanation in the in the Pilot/Controller Glossary, which states the “components of a typical traffic pattern are upwind leg, crosswind leg, downwind leg, base leg, and final approach”—implying an upwind leg is synonymous with a departure leg. It isn’t.

The Helicopter Flying Handbook adds another fly to the ointment calling the departure leg the takeoff leg. The handbook states: “The takeoff leg normally consists of the aircraft’s flightpath after takeoff. This leg is also called the upwind leg.” (HFH p. 9-18)

Both the AIM and P/C Glossary define the upwind leg as a “flight path parallel to the landing runway in the direction of landing.” The AIM depicts the upwind leg paralleling final and departure legs on the opposite side of the traffic pattern. Although the AIM says the terminology of the traffic pattern “has been adopted as standard for use by control towers and pilots.” It hasn’t. ATC often asks a pilot to extend upwind after take-off or go-around when they are surely referring to the departure leg according to the AIM.

According to a 2017 FAA letter, they are aware of the discrepancy and are investigating.

The FAA says in the AC that they do not “regulate traffic pattern entry, only traffic pattern flow.” But, the Feds clearly have an idea of how a pattern should be entered and this update is good news.

The alternate mid-field entry was added to the AC bringing it in-line with AIM and Airplane Flying Handbook guidance. The alternate mid-field entry is a substitute to the preferred entry we’ve all done during a practical test or flight review. In the preferred entry the plane enters the downwind leg mid-field at a forty-five-degree angle. (The FAA occasionally calls this the entry leg.) Doing away with all that extra maneuvering, the alternate entry allows overflying mid-field from the other side and turning directly to the downwind.

Traffic patterns mitigate mid-air risk by setting expectations on how aircraft will maneuver and where to look for traffic. Additionally, orienting everyone in a similar direction reduces closure rates providing time for traffic identification. The closure rate of an aircraft entering the downwind on the entry leg with a plane on the downwind is a lot less than head-on, or even at a 90-degree angle.

One of the highest risk areas in the traffic pattern is the base-to-final turn. The right-angle between straight-in and base traffic keeps the closure rate high. Also, a plane turning from base to final is wings up with a poor view of traffic on final through the turn. The same 90-degree intercept and turning limited viewing occurs during the alternate mid-field entry. Hence the recommendation that it’s only used when an airport has little traffic.

Right-of-way rules add organization to the airport area. Distressed traffic has priority over everyone. Then less maneuverable traffic take priority over more agile traffic; balloon, guilder, towing plane, airship, helicopter and airplane. An interesting caveat is that aircraft on final approach to land have right-of-way over other aircraft operating in the vicinity.

Misinterpreting this rule might have prompted the following addition to AC 90-66, “pilots conducting instrument approaches should be particularly alert for other aircraft in the pattern so as to avoid interrupting the flow of traffic, and should bear in mind they do not have priority over other VFR traffic.” The confusion could arise from final approach to land versus final approach segment.

Although instrument pilots might think of themselves as Chuck Norris’ of the sky, the airport traffic pattern isn’t full of bad guys to karate kick out of the way. Conflicts potentially exist between instrument pilots on straight-in, circling and practice approaches with other pattern users.

The AC reminds instrument pilots that conducting an instrument approach or being on an IFR flight plan doesn’t give priority over other traffic—the normal right-of-way rules still apply. Pilots of bigger and faster planes, potentially on commercial missions, sometimes aren’t the best neighbors. When I flew 135, my non-towered radio calls carried a strong “get out of my way” tone.

The potential for conflicting paths around busy patterns increases when practicing instrument approaches. On nice days everyone goes flying. Practicing a variety of approaches may require conducting approaches to runways not in use and clash with the pattern being used.

An area where that technique won’t work well is circling approaches. Practice circling approaches are best done at the actual MDA. While the Instrument Flying Handbook provides examples of varying patterns to fly when circling, AC 90-66 reminds pilots that “circling approaches require left-hand turns unless the approach explicitly states otherwise” as required by 91.126(b). Complying with this requirement will sometimes necessitate taking a longer track to the runway. For example, when an approach ends perpendicular to a runway, instead of making a left turn to enter a right pattern, you might need to overfly the airport before making the left turn to enter the left pattern (the alternate entry we talked about).

Playing nice around airports also means speaking a language all can understand. While it might sound cool to say, “JUSOM, inbound for landing,” few VFR pilots would have any idea where the flight is and on which runway it’s going to land. A better option is to start with a direction, distance and altitude: “5 miles East over JUSOM at two-thousand feet on the ILS landing 25R.” The AIM recommends position reports during practice approaches when departing the FAF inbound, completing or terminating the approach, or when going missed.

Parts of the new AC feel like getting a wooden spoon to the back of the hand. Habits and practices that have long been common are identified as wrong. For example, the AC calls out the practice of stating, “Any traffic in the area, please advise.” The Feds write that the practice “is not a recognized self-announce position and/or intention phrase and should not be used under any condition.” Their thinking is that aircraft should reply without prompting to a position self-announcement. While I hope this would be the case, the AIM only recommends a position report for someone in the pattern “on downwind, base, and final approach.” A please advise request might prompt a report on departure or crosswind legs.

The AC also advises us to use the official airport name instead of a nearby location. This makes sense when multiple airports serve the same town or county using the same CTAF frequencies. For example, Portland, OR has multiple airports that start with Portland. But the FAA needs to be practical, saying “Charles M. Schulz Sonoma County Traffic” twice in a transmission is a jawbreaker.

Descending into the traffic pattern is a no-no. Visibility blind spots between low-wing and high-wing aircraft can make spotting a descending aircraft nearly impossible. A 2016 traffic pattern accident at West Georgia Regional airport occurred when a Bonanza overtook and descended into a Diamond (NTSB ERA16FA312A). A contributing factor was the Bonanza driver was using an old CTAF frequency—it only changed five years before.

A bit of ridiculousness is the AC’s guidance to ask an instructor, FBO employee or other pilot at your departure airport about special procedures or local protocols if they are not apparent or directly communicated by the FAA. The AC warns “one inconsiderate act, even if inadvertent, can undo months of effort by local pilots and the airport.” One of the biggest threats to the national airspace system is creating local procedures and expecting transient operators to be aware and comply.

Unless it’s safety critical, calling out a pilot on CTAF who’s not complying with accepted practices is bad manners. With a nod to road-rage, the AC includes a paragraph on disagreements. Being angry at a pilot who doesn’t follow the rules is natural. Rules keep us safe: Disregarding them is a threat that triggers the fight portion of the fight-or-flight response. But where’s the line? When do you say something? When there’s a specific safety threat—aircraft A is going to cut off aircraft B.

Focus on the Facts

With traffic becoming increasingly concentrated into a dwindling number of GA-friendly airports, the chances of mid-air collisions increases. The traffic pattern is the primary tool for mitigating traffic risk, particularly at uncontrolled airports.

The needs of the instrument community sometimes conflict with the flow of the traffic pattern and operations at non-towered airports. When weather is right at minimums, there isn’t much competition for the space, but that is rarely the case. Most flying days involve weather good enough for someone to be buzzing around the pattern, particularly in Class G airspace.

When practicing approaches, the best option is to stay out of everyone’s way by adding some altitude. If that isn’t practical, clearly announce your distance and direction from the airport in language a student pilot will understand. Right-of-way rules still apply. If practicing a circling approach, make left turns unless otherwise stated in the chart. Or practice a pattern entry—the alternate mid-field entry is quick and easy.