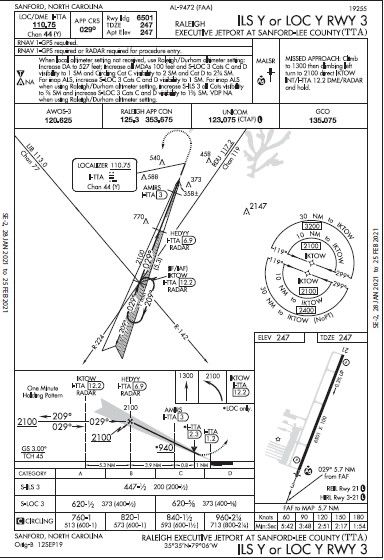 When I first saw the approach chart for the ILS Y or LOC Y RWY 3 at Raleigh Executive Jetport at Sanford-Lee County, South Carolina (KTTA), I thought I was seeing something unusual. I was. It’s an ILS approach with a Terminal Arrival Area (TAA). Yes, these are possible and we’re starting to see more, so let’s take a closer look. Let’s call this the “Y” approach. The “Y” also implies that there is a “Z” approach lurking nearby.

TAAs are typically associated with RNAV (GPS) approaches using the familiar “T” structure. Such designs frequently have initial approach fixes (IAF) at the end of the arms of the “T” and the center waypoint is usually an IAF and an intermediate fix (IF). However not all GPS “T” approaches have TAAs.

The second thing I noticed is the lack of a Minimum Sector (or Safe, if you prefer) Altitude (MSA) ring. On ground-based approaches, the MSA’s central reference point must also be a ground-based navaid. Approaches can’t have both a TAA and an MSA, so here the TAA replaces the familiar MSA.

MSAs provide at least 1000 feet of obstacle clearance usually within a 25 NM radius of a reference point. This can be expanded to 30 NM if necessary. Usually only one “sector” is shown but when necessary to obtain relief from
obstructions, there could be up to four sectors, each slice at least 90 degrees. Ground-based approaches use MSAs with central reference points, usually VORs and perhaps still an occasional non-directional beacon (NDB). For RNAV approaches, MSAs are referenced to non-precision missed approach points, usually the runway threshold. MSAs are strictly emergency altitude(s) and don’t guarantee navigational reception.

TAAs replace MSAs but there is a fundamental difference. According to AIM 5-4-5. d.5: “Altitudes published within the TAA replace the MSA altitude. However, unlike MSA altitudes the TAA altitudes are operationally usable altitudes. These altitudes provide at least 1000 feet of obstacle clearance, more in mountainous areas.” This means that the floor altitudes of TAAs (for KTTA:
2100, 2400 and 3200 feet MSL) are flyable routes. Think of TAAs as a very large area with MEAs. At KTTA the TAA has a typical 30 NM radius which covers an area over 2800 square nautical miles. 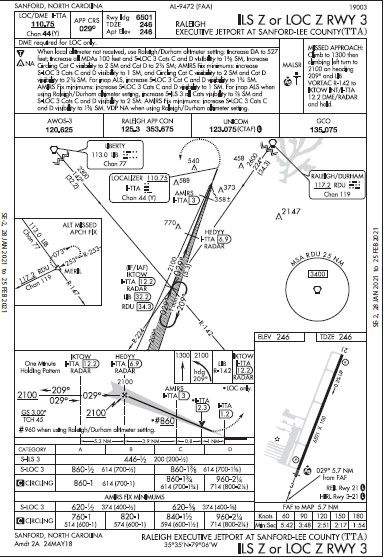 “GPS or radar is required for procedure entry” is one of the new notations showing up on approach charts; it describes other equipment or service needed to fly segments of an approach other than the final. This also says that if using GPS, it needs to meet an RNAV GPS-1 Performance Based Navigation (PBN) specification, found in AC 90-100A CHG 2. This specification is coded in the flight plan as PBN/D2.

The equipment requirements are confusing. Final segment requirements beyond the primary nav are no longer in the title of the approach and are moved to the first line, “RNAV 1-GPS required.” Thus, you need GPS for either the final or missed or, in this case, both, although on final you’ll only need GPS on the LOC version. We’ll get back to all this.

Note that the “ANA” says the approach cannot be used as a filed alternate. But it doesn’t mean that the airport can’t. There are two other approaches at KTTA (RNAV (GPS) RWY 3 and 21) that don’t have that limitation. When filling any alternates we need to be more granular, looking at specific approaches to determine appropriateness. The “ANA” means “alternate minimums not authorized due to unmonitored facility or absence of weather reporting service.” In this case the ILS is not monitored but the airport does have AWOS-3 weather reporting service.

The description of the somewhat rare ground communication outlet was updated in the latest Pilot/Controller Glossary of December 2020: “An unstaffed, remotely controlled, ground/ground communications facility. Pilots at uncontrolled (sic) airports may contact ATC and FSS via VHF radio to a telephone connection.” Then: “Pilots will use four ‘key clicks’ on the VHF radio to contact the appropriate ATC facility or six ‘key clicks’ to contact FSS.” Probably the most common usage is to contact ATC for an instrument clearance and to
close an IFR flight. Or, it might just be easier to use a cell phone, especially if connected to your headset.

By contrast, our old familiar remote communications outlet (RCO) is a direct dedicated link to just one facility, typically FSS. As FSS use declines, many RCOs are being decommissioned.

This approach has no flyable routes, so there are limited ways to reach the final segment, as we discussed. One is getting radar vectors from Raleigh Approach Control. The other way is to fly directly to the only IAF, IKTOW, using GPS. This also allows us to take advantage of the TAA charted altitudes and no procedure turn is required if approaching from the southwest.

Once you’ve entered the procedure with GPS or via vectors, the next step is to identify the FAF, HEDYY. You can do that using your GPS or on the localizer with DME, if you have one, or with ATC’s help using their radar.

Say the glideslope is out today, so you’re flying the localizer-only version of the approach. You began your descent passing HEDYY. There are three more fixes that might be handy to know: AMIRS, then the VDP, and last the MAP. How do you identify those?

We go back to that equipment box stating that RNAV 1-GPS is required. So, since you’ve got to have it, you could use that to identify those fixes. Problem solved.

Finally, note the timing table. Remember your instructor beating you up with all those Ts at the FAF? Wasn’t one of them, “time”? A lost skill? Perhaps, and given that you’ve got to have GPS for this final segment, you could argue that the timing table is an anachronism and it might be. But, if you have kept the useful habit of starting that timer at the FAF, the table is there for backup.

As we’ve discussed, DME is not listed as any requirement. But, it could be used on this approach. The LOC has a co-located DME identified in the LOC frequency block as Chan 44. (The “channel” refers to the actual DME UHF frequency that’s paired to the LOC VHF frequency.) This would help identify those fixes on final since their DME is shown in the profile.

DME also show up in the missed approach narrative. But the description says you must fly direct to IKTOW, so you’ll be using GPS, with DME merely another way to identify IKTOW once you get there. Since you must have GPS for the missed, DME isn’t required and is relegated to a supplementary role. You could also ask ATC to identify IKTOW for you. 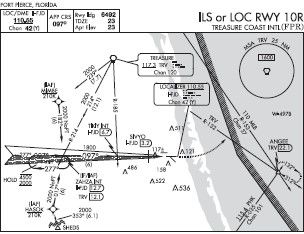 Once you’re in the hold, you could use the DME on the localizer. In fact, once you arrive at IKTOW, you could also identify it from the cross radials and you could fly the hold with nothing more than VOR and LOC receivers and a timer. But with the required GPS why bother?

Look at the “ILS Z or LOC Z RWY 3 approach. The “Y” and “Z” approaches are identical on final, including the
fixes. The “Z” uses an MSA. It is based on the RDU (Raleigh Durham) VOR located approximately 23 NM northeast of KTTA and has a radius of 25 NM. So most of the approach is outside the MSA. On the other hand, the TAA of the “Y” (based on IKTOW) reaches out to 30 NM and covers a large area around the airport. Maybe that’s one reason for the TAA.

Unlike the “Y”, the “Z” has two flyable routes (self-navigation) to IKTOW: one from the Liberty (LIB) VORTAC and the other from RDU. Both have courses, MEAs and distances. The “Z” missed approach procedure is similar to the procedure in the “Y.” But, the “Z” has you fly a heading to intercept a radial to get you to IKTOW rather than direct on the “Y.”

The minimums sections are quite interesting. The “Y” minimums are conventional ILS, LOC, and circling. The LOC MDA is 620 feet MSL with a visibility of ½ SM with a stepdown of 940 feet MSL at AMIRS that you identify with that required GPS.

The “Z” minimums are broken into two categories, with or without identifying AMIRS for the LOC and circling approaches. In the equipment box, it states that “DME required for LOC only,” which would include GPS. The real mystery is the one-foot difference in the ILS DA between the two approaches.

It’s interesting to note that the LOC “Z” approach with AMIRS has the same mins as the LOC “Y” approach, further validating our conclusion that the “Y” approach requires identifying AMIRS, with that required GPS. Also note the significant step-down difference at AMIRS.

Why the TAA With ILS?

This is perhaps the most important question. One might speculate that most light GA airplanes that fly under
IFR have IFR WAAS GPSs and the large operational areas of TAAs make life easier for everyone. “Cleared direct to IKTOW. Cleared for the approach,” is far simpler than vectors or own nav via a transition. Plus, depending on your inbound course, half of the TAA areas would be annotated NoPT.

Or maybe it’s the shutdown of VORs as part of the Minimum Operational Network (MON) program. For example, the Fort Pierce, FL (KFPR) airport ILS or LOC RWY 10R MSA is based on the Treasure VORTAC (TRV). TRV is targeted to be decommissioned as part of MON. The next closest VOR is Palm Beach (PBI) 51 NM—too far—to the south.

When TRV goes away, what happens to the Ft. Pierce ILS? One easy solution is also to decommission the ILSKTTA. Or, better, use a TAA and require GPS to fly the procedure entry. If this speculation has any merit, perhaps we will see more TAAs associated with ILS approaches. Oh, wait. We are.