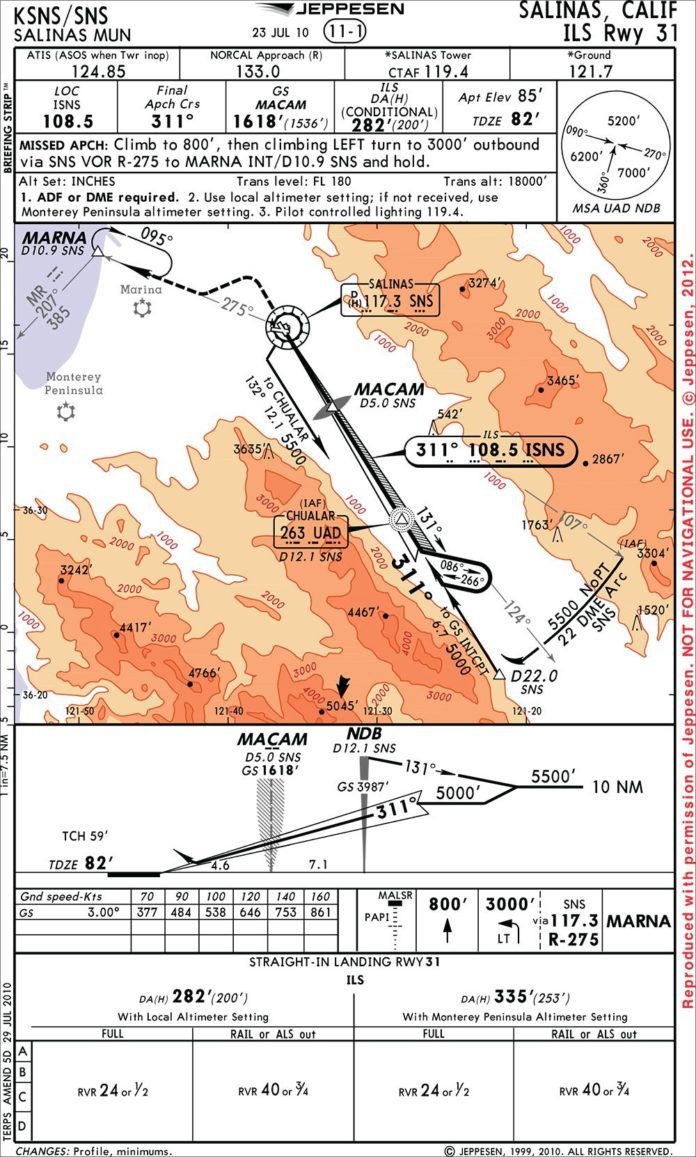 An ILS approach chart is really two approaches sharing one chart—except when it isn’t. Sometimes one little detail way upstream makes all the difference.

Fly IFR enough and reading an approach plate becomes something akin to ordering at your favorite diner. You know everything on the menu. When Lorna the waitress tells you they’re fresh out of the sweet potato fries that let you pretend you’re getting a vegetable with your triple-bypass cheeseburger, you call for the onion rings instead without asking for your options. Hey, onions are vegetables too, right?

Much the same way, if you’re planning to slip down an ILS to one runway but circle to another for favorable winds, you assume the circling option is there on the approach menu. Not so the ILS Rwy 31 at Salinas, Calif.

A quick check will also reveal there are no localizer-only minimums, either. This isn’t common, but it’s not unheard of. There are plenty of ILS approaches where there’s no way to provide stepdowns for a localizer-only approach, or the steps would be too severe.

But that’s clearly not the case here, as there is a separate, charted approach for the LOC DME Rwy 31 that looks on the surface to be the same approach. They have the same DME arc and the same final approach course following the same localizer signal. The localizer MDA is only 138 feet higher than the ILS DA, so it’s not like there’s some nasty, close-in obstacle you must remain clear of by holding fast to a glideslope. The two approaches have identical missed-approach procedures, so that’s not the issue.

One Thing Leads To Another
Except for the rocks on either side of the approach corridor, the ILS seems pretty straightforward: three-degree glideslope, simple barb procedure turn and an outer marker beacon about five miles from the threshold.

“Wait,” you say. “The Chualar NDB isn’t five miles out. It’s more like 12 miles out.” You mutter that the IFR editor better read the chart more closely. And there’s the rub right there: The Chualar NDB (UAD) isn’t the outer marker; MACAM is. You know it’s an outer marker by the “- -” Morse code shown under the name in the approach profile view and the symbology in the plan view.

This ILS needs a procedure turn, which means there needs to be a fix for that procedure turn to begin and sufficient protected airspace either left or right of course. The closest to the airport where that can happen is more than 12 miles from the threshold. That’s why the UAD NDB is so far away and, oddly, why there are no circling minimums.

The high PT altitude creates some problems for approach designers looking to overlay a localizer approach on the same chart. To co-chart, they have to be able to start at that same 5000 feet and still come up with a set of stepdowns that meet the criteria required by TERPS.

Of course, these are different criteria than for the ILS once the aircraft is on a glideslope, and the approach designers couldn’t find any configuration where they could start that high and still create a workable localizer approach that met all the requirements. The result was that the localizer had to be drawn up as a separate approach, and it couldn’t have a procedure turn. You must join in from vectors or the DME arc.

No Menu Substitutions?
But why does all this prevent circling minimums on the ILS? It’s rather like an arbitrary “No Substitutions” on that diner menu. Flight Standards policy won’t allow stand-alone precision approaches to have circling minimums.
This leaves a pilot wanting the simplicity of an ILS but having a need to circle for some other runway than 31 with a quandary. Flying the ILS glideslope puts you lower than the localizer stepdowns. Look at the altitudes at MACAM: 1900 for the localizer but only 1618 if you’re on glideslope. Can you fly the glideslope of the ILS and then pull a switcheroo at the last minute and circle from the localizer approach?

Technically, no. But practically, it’s hard to see how any physical harm could come of it. Once inside D5.0, you could continue down the glideslope until 560 or 580 feet as appropriate for all but Cat D aircraft and level for the circle. We say “no physical harm” because Salinas Tower might raise a fuss that you’re doing something not published on any chart. But then again, they might not notice.

Or, like Jack Nicholson in Five Easy Pieces (ordering forbidden toast by ordering a chicken salad on toast, hold the butter, lettuce, mayonnaise and chicken), perhaps you could convince them you thought you were flying the localizer approach all along. Too bad you can’t sweet talk ATC with a nice tip.