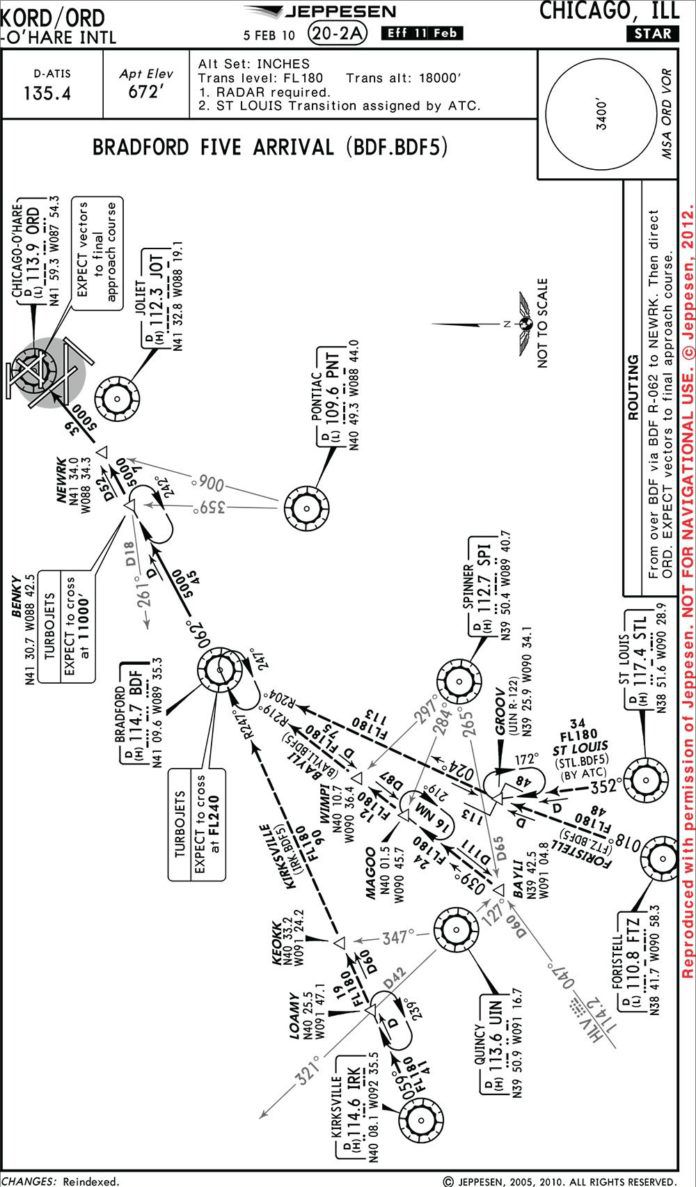 How many direct magnetic courses can there be between two points? Sometimes the answer is three. How many can possibly be right? Actually, all of them.

I looked at the arrivals into Chicago O’Hare and noticed something peculiar. Both the BENKY ONE and BRADFORD FIVE arrivals have a transition route from Kirksville VOR (IRK) to LOAMY intersection. But the BENKY arrival shows a course of 068 degrees while the BRADFORD arrival shows 059. I put IRK direct to LOAMY in my GPS … and got a third course of 064.

What is causing these different courses for travel between the exact same points? The answer is magnetic variation.

Navigationally Correct
You will recall from your Private pilot license training that magnetic north is askew from true north. The difference between true and magnetic north is called “magnetic variation.” This is also referred to as “magnetic declination.”
Sectional and en route charts contain dashed lines showing the amount of variation. These lines are called “isogonic lines” unless it is indicating a zero variation, then it is called an “agonic line.” A pilot uses these lines to correct the true course he drew on a chart for variation. The result is magnetic course.

The earth is not a good bipole. Magnetic north shifts over time. The National Geophysical Data Center, a division of NOAA, is responsible for creating magnetic variation models for the U.S. government. The models map the magnetic variation for every U.S. territory and include the predicted change over time.

The model used in aviation is updated every five years. The update year is called the “epoch year.” We are currently in the 2010 epoch year; the next epoch year will be 2015. Chart designers reference the epoch year when creating and updating charts and naviads.

Additionally, a VOR must be completely shut down while being realigned. The FAA’s own guidance is for airports and VORs to be updated when the facility’s assigned variation deviates from actual variation by +/- 3 degrees.

Budget constraints have limited the FAA’s ability to update VORs, meaning some, such as IRK, are six degrees off current variation. The A/FD lists IRK’s variation as six degrees east when the actual variation is about zero degrees.
Because VORs are updated at different times, you can find very different inbound and outbound courses on a victor airway because of different magnetic variation.

For example, V-156 on chart L-27 leaves the Moline VOR (MZV) on a course of 096, but comes inbound to the Bradford VOR (BDF) on a course of 102, even though they are only 49 miles apart. Five of the six degrees of difference is due to when the VORs were last realigned. MZV was last aligned in 1965 with a five-degrees east variation. BDF was updated in 1995 with no variation. The last degree of difference is due to variation changing by one degree over the length of the airway.

Co-located VORs and airports do not always have the same variation. For example, the Chicago O’Hare VOR has a variation of two degrees east from epoch year 1965, while KORD, the airport, has a variation of three degres west from 2010. Airport magnetic variation is updated more frequently than VORs to maintain approach criteria. In the case of O’Hare, the airport does not have any approaches based on the VOR. Therefore, the five-degree difference is of little consequence. Also, airports with a co-located VOR but without a straight-in approach do not need to be updated at the same time.

Take a Number
The magnetic variation used in charts also varies depending on the situation. For charts associated with an airport, such as STARs, DPs, ODPs, and instrument approach procedures, the magnetic variation for the primary airport is used. As previously mentioned, O’Hare has an assigned variation of three degrees west.

Therefore, the BENKY arrival will have a magnetic variation of three degrees west applied to the whole procedure, including the course from IRK to LOAMY. For arrival and departure routes predicated on VOR radials, the magnetic variation of the station is used for that segment, resulting in a difference between RNAV and terrestrial based procedures.

But The GPS Says …
In general, GPS units display a course using the magnetic variation of the route. There is no set standard for how magnetic variation is applied in GPS receivers. Every manufacturer develops its own method, causing differences in displayed magnetic courses between the same two points. While at first this may seem like a major oversight by the FAA, it is not.

Slight differences in displayed magnetic courses are not a significant issue because GPS units are direct-to devices. They create courses directly from one point to the next. When the FAA creates a procedure, the first step is to draw the intended course on a map relative to true north. When a GPS creates a course between two points on the procedure, the ground track is going to be exactly the same. It does not really matter what the GPS unit or procedure displays for the course, because GPS is drawing a line over the intended ground track. The magnetic course is just nice to know.

Occasionally, ATC will ask for a heading to a fix. In this instance, ATC is looking for the magnetic course. The magnetic course the GPS produces is much more accurate than the estimation pilots used prior to RNAV. However, there might be slight differences in course among different brands of GPS. In the radar environment, controllers have the ability to find an airplane’s direct course to a fix. Many times controllers ask for expediency and want a general idea of the direction you are going to go to coordinate with other aircraft or ATC facilities.

Back to BENKY
How magnetic variation is applied to the world we fly in is a complicated topic, but it finally explains the difference in what should be the same course.
The true course from IRK to LOAMY intersection is 065. On the BRADFORD arrival, the magnetic variation of the IRK VOR of six degrees east is applied to the true course to get a magnetic course of 059. The BENKY arrival uses the variation assigned to Chicago O’Hare of three degrees west to come up with a magnetic course of 068. My GPS comes up with a course of 064.

The key point is that all three lines are describing the same ground track. There is only one direct line between two points and as long as we fly that line we are doing what ATC expects.

As the FAA implements NextGen, look for more examples of RNAV arrivals paralleling terrestrial-based arrivals with much different courses. Memphis recently received a number of updated arrivals, leaving the controller stumped about the different courses on the new versus old arrivals. Next time you see these differences, you will know the answer: magnetic variation.

How the GPS handles it
Multiple factors contribute to the course displayed in GPS devices. Because the earth is round, the shortest distance between two points is a curved line. Therefore a straight line on a flat chart will turn into a curved line in the GPS, which is earth-centered. This accounts for some differences in charted courses versus those displayed on the GPS.

There is no prescribed model for GPS devices. For example, the iFly GPS by Adventure Pilot is a portable and not constrained by certification standards. IFly uses a grid model that is updated over time where current date is used to update the predicted variation. This number is then applied to the course when inside the grid. As a pilot flies though different grids the magnetic course will continue to update. Over time the manufacturer updates this model.

Garmin uses the International Geomagnetic Reference Field (IGRF) model (for those interested you can download the model to an excel spreadsheet). The IGRF model is similar to the one used by the FAA in that it is updated every five years and includes predicted change. It differs from the National Geophysical Data Center model in that it is worldwide and a consensus of models. The application in the device is similar to iFly because the course a pilot sees when navigating between two points will update as the local magnetic variation changes.

All aviation navigational databases in certified GPS installations originate in the AIRINC 424 format. Courses loaded from a database should have similar courses to those printed on the chart for all of the 23 official AIRINC 424 leg types. For example, loading the BRADFORD FIVE arrival should show a course of 059 from IRK to LOAMY even though plugging in these two points yourself will show a 064 course.

The application of variation in GPS units incorporates many factors in addition to just the model used. The great-circles route, procedure coding, type of fix, and OBS mode all affect the course shown. The FAA notes in AC 90-105, “… differences of three degrees or less may result from equipment manufacturer’s application of magnetic variation and are operationally acceptable.”

I just saw a four-degree difference this morning. But what’s a degree or two among friends. —J.M.

Jordan Miller tries to keep his numbers straight while not spilling anyone’s coffee from the left seat of a regional airliner.