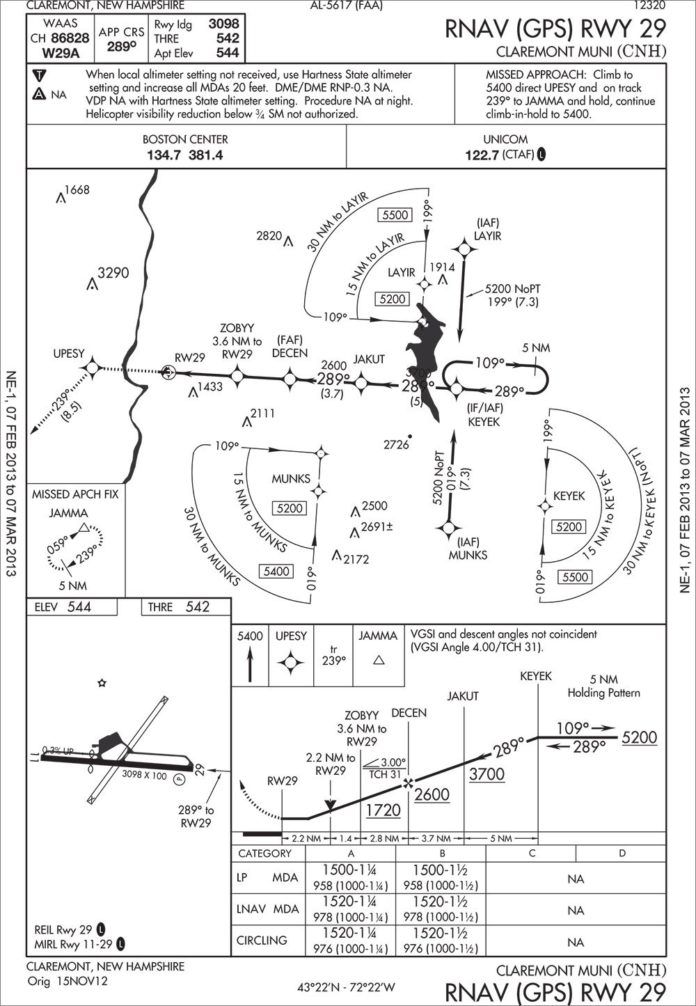 There is no question that pilots planning to fly IFR should always keep a current database in their approved GPS. It’s not difficult and it demonstrates a professional attitude toward instrument flight and aircraft maintenance. In the perfect black and white world of flight schools and checkrides, this would be standard. However, in the real world of dumb luck and Murphy’s Law, this topic gets a little murky.

What happens when your database is current when you take off, but expires before you reach your destination? How about departing with an expired database with plans to avoid GPS approaches, only to encounter an emergency and, as luck would have it, the nearest airport has only GPS approaches? In hindsight, it would have been a good idea to have just updated the database, but nevertheless, you still need to get down safely.
Thankfully, the FAA offers some surprisingly pragmatic guidance in this matter. AIM 1-1-19 states that flying an IFR approach with an approved GPS “requires current database or verification that the procedure has not been amended since the expiration of the database” (emphasis added). The question becomes how to wade through all the dates found on a procedure so that you can determine whether it has been amended.

Chart vs. Procedure Changes
An approach plate has three dates: the effective date, the revision date, and the procedure amendment date. Effective dates are determined by the cycles coordinated by Aeronautical Information Regulation and Control (AIRAC), which are the 28 day aeronautical data currency cycles used throughout the world. These cycles set the schedule for when your database needs to be updated, and are the reason behind AeroNav’s (FAA) 56 day publication schedule and 28 day change notices. Jeppesen charts also have an issue date, which relates to their production schedule, but they don’t correspond to the AIRAC cycle dates, although any effective dates will. This can get confusing in that AeroNav publishes each chart each cycle while Jepp only reissues a chart for a change.

Revision dates are updated whenever anything changes on the chart, whether it’s a major procedural change, a simple frequency change, or just a formatting change. For this reason, revision dates may sometimes differ between AeroNav charts and Jepp charts. Although you can easily tell when something has changed on the chart, the date of last revision doesn’t tell you anything about what changed, which is what we need to know for verifying whether a procedure in an expired database is still current.

Whenever the underlying procedure changes, the amendment number is updated. This is shown at the bottom left corner of both Jepp and AeroNav charts. That’s all well and good, but since the most recent procedure amendment number isn’t stored in your GPS database and revision dates may or may not reflect an amendment, how can you tell if a procedure has changed without referencing the previous set of charts?

Until October of 2009, that’s exactly what you had to do. However, for procedures amended since then, the FAA and Jeppesen have made it easier to verify current data by publishing the date the procedure was last amended next to the amendment number. That way, if you have current paper charts that don’t indicate a procedural amendment date later than the last database update, you can be certain that the database reflects the current procedure.

You won’t find an amendment date on all procedures though. Not yet anyway. If an approach plate is missing an amendment date, that means it was last amended prior to the date they began to be published. If you think about it, this still gives you sufficient information to verify data currency (unless you have a REALLY old database). Although it would seem this would be a simple formatting change, this information isn’t added to AeroNav or Jepp charts until a procedure amendment is published, so for the time being, it’s common to see charts with recent revision dates still lacking amendment dates.

What’s in an Amendment?
Procedural changes generally affect navigational data (courses, distances, altitudes, etc.), minimums, equipment requirements or significant changes to navaids or the approach runway. Some changes significantly alter the procedure enough to cause pilot confusion, so the existing procedure is cancelled and reissued, which resets the amendment number. Adding a glideslope to a localizer procedure or the relocation of the navaid used on final, changing the final course ground track, are examples of changes that would cause the procedure to be reissued.

From a pilot’s perspective, if an approach plate indicates an amendment date that is later than what is contained in your database, there is no way for you to precisely determine what has changed. Some changes, like removing an initial approach fix, are fairly obvious, but others are not. For example, relocating fixes while retaining the same name is fairly common. If you were to load an old version of such a procedure in your GPS, the leg sequence might appear to correspond to the current procedure, but would lead you to the old position of the fix.

Keep Thy Data Current
It’s easy for database updates to be out of sight and out of mind, only to surprise you with an expired data warning when you’re all set to go, but it doesn’t have to be so. Since GPS databases are tied to AIRAC cycles on a predictable 28 day schedule, the revision dates can be added to your calendar. Also, if you use an iPad as an EFB with an app that alerts you when updates are available, you should consider those to be your cue that your on-board database needs to be updated as well.

While the techniques discussed here provide a way to determine whether a procedure contained in an expired database may safely be flown, the fact that a determination must be made at all implies that there is a significant chance that a given procedure may not be safely flown. Still, flying a procedure with an expired database can certainly get you out of a bind, so it’s worthwhile to put into your IFR bag of tricks. Note, though, that for you to determine the various dates for a procedure and determine whether you can use your expired database requires that you access current data somehow—either paper or electronic—so you might as well update the GPS to begin with.
Lee Smith, ATP/CFII, is an aviation consultant and flight instructor in Northern Virginia.