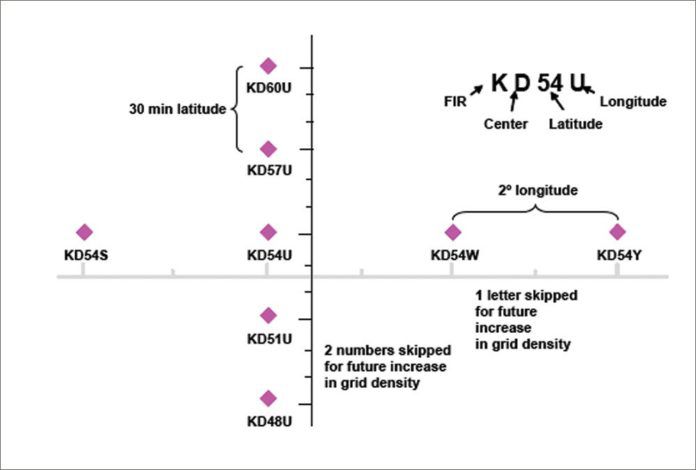 Going direct still requires a fix in each Center’s airspace, but finding the right one is often difficult. There’s a solution for high-flyers that might be available to everyone someday.

The original structure of the National Airspace System (NAS), with its VORs, airways and intersections, has served us well for decades. But it’s rapidly becoming outdated in this age of direct navigation between most any two places on the globe. A more structured system already exists: It’s called the National Reference System (NRS).

The NRS structure is simple, but the implementation adds some complexities. Imagine the airspace for the contiguous 48 United States overlaid with a grid measuring two degrees of longitude by 30 minutes of latitude. Place a fix at each intersection of these lines. These fixes are called NRS waypoints.

When first conceived in 1995, there were only about 600 of them across the seven northwest-most ARTCCs in the U.S. Now there is complete U.S. coverage across all 20 ARTCCs, providing about 1600 waypoints.

Breaking the Code
The complexity comes from naming these waypoints. Conventional waypoints have only five letters, so some coding scheme was required to fit NRS waypoint designations within that existing system.

Like our ICAO airport codes, these U.S. waypoints begin with a “K.” Because one purpose of these waypoints is to make them Center-specific, the second character defines the ARTCC in which the waypoint falls. A waypoint whose name begins with “KD” is in the U.S. and is within Denver Center’s territory.
The next two characters of the NRS waypoint name represent the latitude. Starting at the equator (zero degrees latitude), they’re assigned a sequential number every 10 minutes. This is for future expansion, even though the current waypoints are only every 30 minutes. Thus, the NRS waypoint numbers go in the sequence 03, 06, 09, etc. When the NRS latitude code reaches 90 (every 15 degrees of latitude), the sequence repeats, with the next number being 03 again.

The last character of the name is a letter representing the longitude. Again for expansion, there is a letter for every degree of longitude, but because the NRS gridlines are currently two degrees of longitude apart, the current letter sequence is A, C, E, etc., skipping every other letter. Obviously, knowing the ARTCC helps keep the codes straight.

Finding the Spot
You may have never noticed, but NRS waypoints are on high-altitude charts. Select a chart covering airspace west of the Mississippi for its lower density. Find a line of longitude. (They’re the vertical lines on the chart.) Note that at every third tick mark on these lines of longitude there is an obscure reference like KD69Y. On the FAA charts, these are light green and could be difficult to notice unless you’re specifically looking for them. On the Jepps, they’re more prominent.

But a fix on a chart isn’t much good unless it’s in your database. Jeppesen has included the NRS waypoints in its database for years. Whether that particular feature is included in your specific navigator is, of course, up to the manufacturer. However, they are in the databases for Garmin’s new GTN-series navigators and the still-ubiquitous 430/530.

Many of the popular flight planners also know about them, particularly if the software is designed to be used for flights in Class A airspace. However, I’m not aware of any flight planning program that will suggest them; you’ve got to manually force their use. Your tools may be different, but in my experience, NRS waypoints are published, implemented and ready for our use.

Filing the NRS Way
NRS waypoints are only usable in Class A airspace, so unless you cruise in the flight levels, this is nothing more than an academic exercise. There is a hint that these may find their way lower, but we’ve been unable to find any plan or commitment for that.

A few progressive airlines have used these for years, saving countless thousands of gallons of fuel, adding up to millions of dollars. Your savings will be short a few of those zeros, but will be nonetheless real.

Say you want to fly from Monterey, Calif., to Laramie, Wyo., a direct distance of 806.5 miles. Between the endpoints in Oakland and Denver Centers, you’ll need a fix in Salt Lake Center. Follow that direct route along on the charts and you’ll see that it passes close to KU60O. Recognizing that it’s always reasonable to put a fix close to each end point, you then file KMRY SNS KU60O LAR KLAR, for a total distance of 807.8 miles. Most of that additional 1.3 miles compared to the direct route comes from adding the VORs at each end.

If we were to plan the same route via VORs and Jet airways, a reasonable route is KMRY SNS ECA J58 OAL J148 MTU J157 LAR KLAR, for a total distance of 843.7 miles, or about 35 miles further. Now, 35 miles isn’t too bad, but say you get about 10 miles a gallon. That’s 3.5 gallons more fuel. At $6 a gallon, that’s a savings of $21. Again, this isn’t a deal-breaker, but add it up over a few trips and you might just find yourself with some meaningful pocket change.

Pausing for a Reality Check
Clearly, NRS waypoints aren’t as convenient as VORs or waypoints with pronounceable names. If somebody told you there was a storm over the Des Moines VOR, you’d have a pretty good idea where it is. However, if that same report said there was a storm a few miles east of KP69G, you’d be clueless.
It’s difficult to use them for weather deviations or other ad-hoc course changes because of the obscure nomenclature. Controllers don’t have them on their scopes (although they will appear in your flight plan). But that’s probably OK, because “Direct Kilo-Papa-Six-Niner-Golf” is rougher on the radio than “Direct Des Moines.”

The real value of these waypoints is in flight planning. Plan your flight end-to-end direct, add one or two NRS waypoints in each Center’s airspace, and file it. If you’ve used reasonable VORs or other fixes at each end before adding the NRS waypoints in the middle, chances are good you’ll get the route you wanted.

That said, don’t expect much cooperation from ATC regarding NRS waypoints in the eastern U.S. The airspace is just too dense, with plenty of suitable VOR-based waypoints and fixed routing, so NRS waypoints aren’t really useful. But in the west they’re in common use by airlines and other high-flyers. Controllers are accustomed to them and occasionally even like them.
Next time you’re planning for the flight levels across multiple western Centers, try using these fixes. You might just be surprised to hear, “Cleared as filed.” The fuel savings could make you a believer. And if we get enough folks putting them into common use for Class A flight plans, it might even get the FAA to consider making them available to the rest of us.

Frank Bowlin uses NRS waypoints at work all the time and is starting to use them in his personal flying.