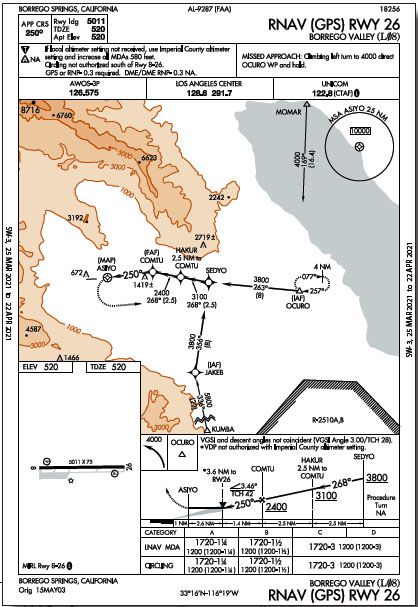 We usually make these so you can fly them with or without a GPS in your sim, but that’s getting more difficult every day. It’s a GPS world out there. Do you really not have some kind of GPS on your sim? Time to ditch that Windows Vista box and get with the times, my friend.

So make sure there’s an IFR GPS in your panel for this one. No WAAS needed, however. To make the day fun, pick out something fast and slippery. (Sometimes this author wonders what a spouse thinks when they walk by and only catch a sentence out of context.) Park that beast on the ramp in Ramona, CA (KRNM). Set the weather with some low ceilings and a southeast wind of your choice. Or just go with real world weather and promise to hide the outside view after 400 feet AGL going up and minimums coming down.

A word to those who might have just joined us is in order. This exercise is best enjoyed (feared?) in a simulator. An inexpensive home sim is fine, but if you don’t have access to a sim, go ahead and arm chair fly it. Don’t just gloss over the high points, but actually envision yourself in the airplane performing every step. Oh, and you’ll need more charts than we can show here.

Your clearance to Borrego Valley, CA (L08) is “… the Runway 27 (or 9 if your sim winds favor it) departure procedure, ROBNN, V208, JLI, V460, KARRO. Climb and maintain 4000.” Do yourself a solid for practice and dial all frequencies as you go. (Alternately, file these airports on PilotEdge and enjoy the full controller experience. No need to ask for that departure procedure because you’ll probably get it. If you do fly with PilotEdge, let them do the vectoring rather than following our instructions here.)

Fire up and fly the departure. If that’s Runway 27, when you’re six miles from ROBNN, climb and maintain 9000 and continue on course. If Runway 9, do what the text says but climb all the way to 9000 as you work it out.

Crossing JLI, clear yourself direct JAKEB. Five miles from JAKEB you get, “Cross JAKEB at or above 6000. Cleared for the RNAV (GPS) RWY 26 approach. When you reach a distance from the runway equal to the required visibility, look up and land as you see fit.

Turn yourself around with a clearance to Gillespie Field (KSEE) of “… KUMBA1.KUMBA, V66, BARET. Climb and maintain 10,000.” If you don’t like the requirements of the KUMBA ONE fly the obstacle departure procedure and figure out a way to KUMBA that doesn’t end your sim flight prematurely. Depart and get yourself heading back over the hills. Ten miles from BARET descend and maintain 8000. Three miles from BARET you get “… cross BARET at or above 5900. Cleared Localizer D approach.” Do your best to land straight-in Runway 27R. If you can’t make it, let Tower throw you a bone to enter left downwind Runway 9L. 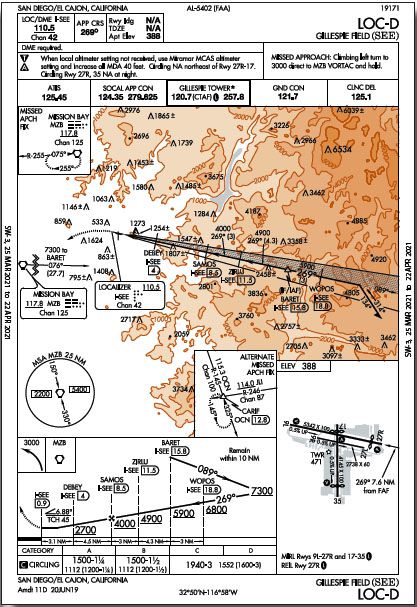 When it’s time to leave Gillespie and go back to Ramona, your clearance comes back for the Mission Bay One, radar vectors, direct, at 6000. Depart the runway of your choice and fly it until established on R-076 to MZB. Once there, clear yourself direct CARIF— like that would ever happen in this airspace—for the RNAV Rwy 9 back into Ramona. It’s about 21 miles as the crow flies, but crows don’t get vectored all over SoCal.

If you set low weather, change it now to the mins for that approach (again, circling and straight in are the same). If you use real world weather, don’t look up until you reach a distance from the runway equal to the vis mins for your approach category. Oh, and assume the Tower is closed for “deep cleaning” so it’s a non-towered field with nothing but static on the ATIS frequency.

Make your best choice for reuniting tires with pavement. Taxi back in and call it a day.

If you’ve flown completely through this exercise, you’ll have encountered a lot of decision—or indecision—points and a lot of points that needed to be considered. Here are a bunch that we found. Compare yours to ours.

1. Which departure procedure did you fly from Ramona? If you took the easy exit via Runway 27, could you have done so from Runway 9? Why were you cleared to 4000 at first? How’d you enter the clearance into the GPS? Did it look right?

2. What happens when you reach 2600 before PGY R-336 on the departure? Do you just keep flying to intercept the radial, head direct ROBNN, or turn somewhat but still intercept the radial? If you depart Runway 9, do you really have to go back to ROBNN to climb to the MEA when you’re using that same airway to proceed on course eastbound?

3. Going into Borrego Valley, did you backup your GPS with a JLI radial at JAKEB? How did that descent for the runway work out? Did you catch the course change at the FAF? Did you land straight-in or circle? If the latter, which way did you turn?

4. What happens if you must depart L08 without an IFR GPS? Why is the ZUNGU an obstacle departure and the KUMBA isn’t? What’s the minimum for crossing KUMBA westbound. And, what’s up with T326?

5. Why is there no straight-in minimum for the LOC-D at KSEE? Could you use your GPS for this LOC-D approach? If you couldn’t land straight-in, which way did you circle?

6. Maybe you don’t like the climb gradients in the Mission Bay 1 and ask for a VCOA. What climb gradient must you still meet above the VCOA alt? And is it 4400 feet or 4600 feet? If KSEE Tower amended your clearance, to simply a runway heading on departure, they’re guaranteeing obstacle clearance. Is there anything you need to check though?

7. If your GPS annunciated LNAV+V, do you need to worry about crossing AYODA at 2520? When would you see that annunciation? Presuming you don’t have an altimeter setting for Ramona on the return, can you still land straight-in?

1. The “published departure procedure” is the ODP, not either charted procedure. Those would be assigned by their names. Remember, an ODP can be assigned by ATC and wouldn’t be optional. You’d get that procedure even if you were departing southbound. The reason is the Class B over your head and traffic from airports to your south. Note that the departure from Runway 9 requires 500 feet per NM. Also, did you put ROBIN (not ROBNN) in your GPS? Always do a sanity check on the route in the GPS before flying it.

2. It’s about eight miles from Runway 27 to V186. Starting from the field elevation of 1395, you only need 1205 feet to reach your turn at 2600 feet. So even at the minimum 200 feet per NM, you’d be at 2600 feet a couple miles before the airway, at which point you’ll be about eight miles from ROBNN. Do you stay on the heading and just turn onto the airway, use a 45-degree intercept, or just head to ROBNN? Probably anything you do at that point that basically heads for ROBNN will work. From Runway 9, you’d have to fly westbound to climb until you could go eastbound above 7700 (the MEA) … except ATC would enter the picture no matter which way you departed, so the question is basically academic.

3. It’d be good to have JLI visible somewhere just for backup. Bearing pointers on an eHSI work great for this. It’s a 3.46-degree descent from the VDP that’s a whopping 3.6 NM from the runway. If you couldn’t descend until 1.5 miles from the runway it would be better than 8 degrees—and to only 5000 feet of runway. Straight-in and circling mins are the same so you could land Runway 8. However, circling south is forbidden yet Runway 8 is right traffic. Depending on your exact rereading of FAA Collins 2 2010, this means you can circle for left traffic … or can’t. The takeaway is to figure out a plan before the FAF.

4. The only departure procedures require RNAV. See earlier statement about “get a GPS.” We can only guess that one departure must be designated obstacle because they have virtually the same requirements, so either would work. The chart says you need to be at 6700 crossing KUMBA westbound. T326 is longer with higher MEAs. No thanks.

5. Did you enjoy that 6.88-degree descent? That’s why there are no straight-in mins—a clue when you brief the approach. Help yourself make the landing work by flying more slowly—the secret weapon to meet a high descent gradient without an insane descent rate. GPS is not a permitted substitute for localizers, so GPS would be for situational awareness, not primary nav. Again, we have a conflict between the pattern direction and circling prohibition, but Tower will sort that out for you.

6. You still need 200 feet per NM from the VCOA altitude. The weather you need is 4400-3, but your climb-to altitude is 4600, listed below. When Tower issues you a heading to fly, it’s in coordination with Departure. But those can require more than 200 feet per NM. They’re listed with the departure procedures. KSEE’s are initially 320-420 feet per NM.

7. As the kids say these days, “Yes, but actually no.” If you get a +V the GPS guidance won’t take you below a safe altitude at AYODA, even if some weird atmospheric conditions show a low reading. Don’t confuse this with stepdowns outside the FAF where you must watch those crossings for ATC separation rather than terrain conflicts. The annunciation should happen when KIJCO becomes the active waypoint, although the GPS has until two miles before the FAF to make it certain. You can land straight in if you can make the descent, which has been the name of the game for this whole sim challenge.