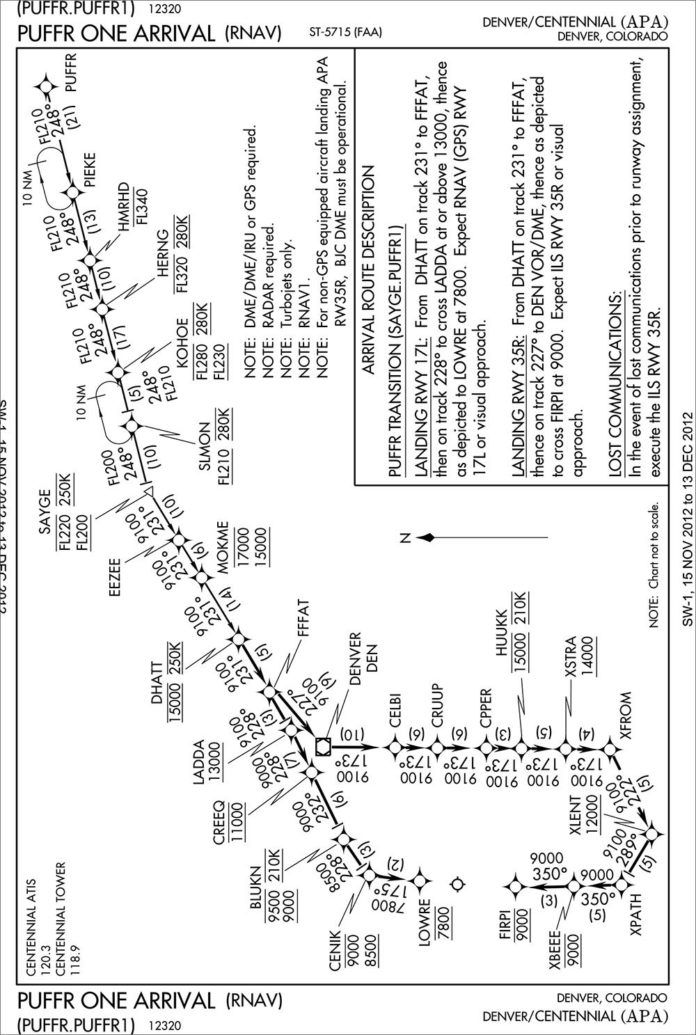 Awhile back we got a note from a reader based at Denver Centennial. He was concerned about a speed restriction on their ILS Runway 35R. We did a little digging and found that the FAA had already concluded this wasn’t such a good idea and removed the restriction. However, this still makes good fodder for these pages, so let’s take a closer look.

On checking, we found that this restriction originated from ATC sequencing KAPA arrival traffic from the PUFFR ONE Arrival onto the ILS. Although we usually expect vectors to final in busy terminals, it is increasingly common that an arrival procedure will take you directly to the IF on an ILS as the PUFFR ONE does to the ILS 35R. This RNAV arrival is built for high-flying, high-speed jet aircraft, but an understanding of this arrival will well serve pilots of lower and slower aircraft.

The arrival starts at the RNAV fix, PUFFR, northeast of Denver. As the arrival progresses there are a series of speed and altitude restrictions, the first of which is HMRHD at or below FL340. Unless you’ve heard the magic words, “Descend via the PUFFER ONE,” you were already cleared for the routing of the arrival, but not the altitudes. Assuming you were cleared to descend via the arrival, the next fix, HERNG must be crossed at or below FL320 and at 280KIAS.

There are two charted holding fixes, one at PIEKE and another at SLMON, that ATC can easily use to stack up the traffic if things are getting congested. “Cleared to SLMON. Hold east as published. Maintain FL220. Expect further clearance tomorrow.”

(If these holds aren’t in your navigator but you can manually enter them, note that the chart specifies ten mile legs—common in the flight levels. Don’t make the mistake of entering a ten minute leg as one pilot we know did. He was half way to Omaha before the controller asked him where he was going.)
The restrictions at SAYGE are worth discussing, as all depictions of “above,” “below” and “at” are shown for this one fix. You’re to cross SAYGE at or above FL200, but also at or below FL220. OK, cross between FL200 and 220. Your speed must be 250KIAS; there is no “not more than” or “not less than.” The speed restriction is to cross SAYGE at 250.

Assuming no holds for you, the arrival simply gives you gradual descents and speed reductions all the way to the approach. The last one of real interest is HUUKK at 15000 feet and 210KIAS. That’s the last speed assignment, but the arrival has a few more altitude step-downs to the final 9000 required at XBEEE and FIRPI.

RNAV arrivals like this exist primarily to ease controller workload. While there might be an arrival based on VOR and DME, this one takes you exactly where the controller needs you, while gradually descending and slowing you, just as they’d do if you were on vectors, but without all the fuss.

Each segment of the arrival has not only the published crossing restrictions, but it also has a published minimum altitude for that segment. While the minimum shouldn’t come into play as the crossings will keep you well above, they are there to provide another layer of protection and charting consistency.

ILS
Centennial’s ILS 35R is like any ILS—if you’ve seen one you’ve seen ‘em all, right?—except this one has some restrictions at FIRPI, the IF on the localizer. Yep, that’s the same FIRPI as the last fix on the PUFFR ONE Arrival. That’s no mistake, since the arrival is designed to feed the ILS.

On the arrival, the altitude at FIRPI is 9000 and the last speed was 210. On the approach, we see that FIRPI has the same restrictions: 9000 at 210. You’re flying your Citation X and were cleared to descend via the PUFFR ONE. Somewhere around XBEEE you were cleared for the ILS. Since you’re already at speed and altitude, it’s no big deal. You just maintain speed and altitude until FIRPI. You’ve then got 6.4 NM to get configured and slowed for the approach before intercepting the glideslope at 8000 at CASSE. All in a day’s work in your bizjet.

But, in your Archer it might be a bit of a challenge. Whateryagonnado? Well, you’re not going to be flying the PUFFR arrival, so you’re not automatically going to be brought in over FIRPI. In fact, it’s highly unlikely you’ll cross FIRPI at all. You can relax; without crossing FIRPI you don’t have to worry about the restrictions there. You’ll probably just get vectors to intercept the localizer about three miles outside CASSE. Piece-o-cake. And still all in a day’s work.
Frank Bowlin flies these all the time at his day job, but still finds them a bit intimidating.