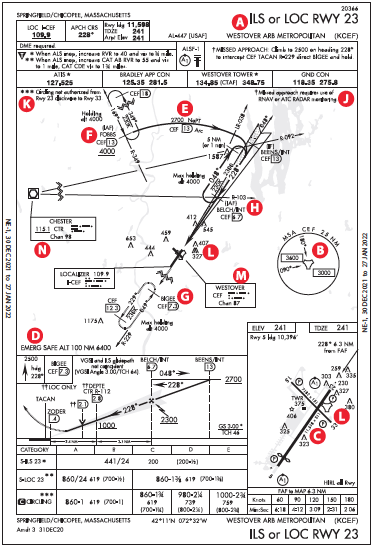 Upon first glance, the ILS or LOC RWY 23 approach [A] at Westover Air Reserve Base/Metropolitan (KCEF) appears to be a typical ILS approach. But looking closely we notice that the MSA (minimum safe altitude) is based on the Westover (CEF) TACAN [B]. The center of the MSA circle is the symbol for a TACAN, . Even though TACAN equipment is available for civilian airplanes, they are typically not so equipped, although if you have civilian DME it utilizes the distance portion of TACAN. The natural question is: Can general aviation airplanes without onboard TACAN (or DME) fly this approach? If yes, how? Furthermore, can the approach be flown without loading it in a GPS navigator?

Westover ARB/Metro is located in western Massachusetts near the city of Springfield. It was built in 1940 and, by 1955, was an active Strategic Air Command Base throughout the Cold War for B52 bombers. Eventually, with the end of the Cold War, it became an Air Reserve Base (ARB) and a joint military/civilian airport. Its name changed to Westover ARB/Metropolitan. Military/Civilian airports are also referred to as joint-use airfields. To accommodate B52 bombers, its main runway (5/23) [C] is 11,598 feet long and 301 feet wide. It was also used until 2011 as a possible emergency landing field for the space shuttles.

The Air Force owns and operates the runways along with most of the airport facilities; however, the tower controllers are FAA. The civilian portion of the airport that includes an FBO and four industrial parks, is managed by the Westover Metropolitan Development Corporation, which was created in 1974 to convert military property to civilian use.

Common at military airports, besides the MSA that is typically restricted to 25 NM from a ground-based navaid, is an EMERG SAFE ALT [D] published within 100 NM, in this case 6400 feet MSL. The 13 NM arc [E] from FOBBS to localizer intercept is based on the CEF TACAN. (Discussed in more detail later.) Additionally, the holding pattern at FOBBS [F] that is an initial approach fix (IAF) is based on the CEF TACAN. The missed approach holding fix at BIGEE [G] also uses the CEF TACAN. The holding patterns, including the hold in lieu of a procedure turn (HILPT) at BELCH [H] , limit the indicated airspeed to 230 knots and a holding distance of five NM; at BELCH an option of one minute legs is allowed as seen on the outbound leg.

I flew this approach “circle-to-land to RWY 33,” and clarified with the tower exactly what that meant. Normally, maybe a mile out on the ILS RWY 23 approach, if in visual contact with RWY 33, the instinct is a left turn to enter a right base or right downwind to RWY 33, maneuver and land. However, the procedure is to continue flying the final for Runway 23 to the intersection of Runway 33, then circle to the left (anticlockwise) to land. The reason was then obvious—obstacles [L] on the eastern side of RWY 23.

Other Factors to Consider

For joint-use airfields, due to the military component, it is important to review the comments in the relevant FAA Chart Supplement. For example (All caps is from the chart Supplement):

CIV TRNG LTD TO LOW APCHS ONLY: No touch and goes but low approaches are allowed.

The familiar VORTAC includes TACAN that provides both azimuth (radial) and range (distance). Think of TACAN as having the same capability as VOR/DME; however, the azimuth information used by the TACAN is different technology from VOR. The “distance” part of a TACAN is DME and is available to most civilian DME transceivers. With the advent of GPS and the ability to use GPS in lieu of DMEs, not many light general aviation airplanes have DME. Also, GPS can be used in lieu of TACAN (Per AC 90-108 CHG 1 and AIM 1-2-3.)

On the other hand, military TACANs are tuned by selecting channels—Channel 87 for CEF. If we want to use the DME component of CEF, we need to know the ghost frequency associated with Channel 87 [M]; it happens to be 114.0 MHz. It is shown in the en-route chart using parenthesis, but is not shown on the approach chart. However, there are a number of TACAN channels that only the military can use meaning that we cannot use the DME component in civilian equipment. Also notice that CHESTER (CTR) [N] is a VOR/DME, and the channel number refers to the frequency associated with DME—115.1 MHz. While not the case here, if a channel number appears with a LOC frequency that means that the LOC has DME.

Without TACAN, can we execute the approach starting at FOBBS and fly the arc to the localizer? And what about the missed approach at BIGEE? Even if we have DME that isn’t sufficient because we need azimuth information. As we can use GPS in lieu of TACAN, the only choice is to load the approach in the GPS navigator just as we would load any ILS approach. This assumes that CEF is in the database as a LAT/LON waypoint. Even if we suspect that the approach is in the database, we should verify that during flight planning. 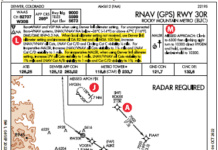